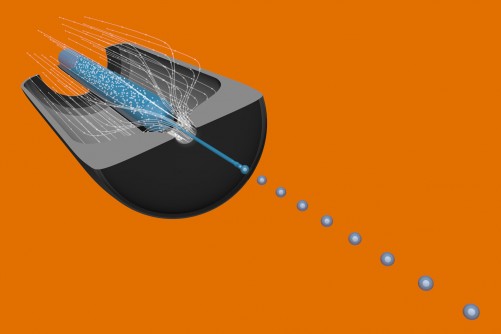 This illustration shows a cutaway view of a type of sample system used at the Linac Coherent Light Source X-ray laser that jets samples in a superthin liquid or gel stream into its X-ray pulses. This system is known as a gas dynamic virtual nozzle.

Newswise — X-ray devices have long been used to see the inner structure of things, from bone breaks in the human body to the contents of luggage at airport security checkpoints. But to see life's chemistry and exotic materials at the scale of individual atoms, you need a far more powerful X-ray device.

Its unique X-ray laser pulses, a billion times brighter than any previous X-ray source on the planet, are the “ammo” in a high-tech shooting gallery with tiny samples as targets. With each direct X-ray hit comes an opportunity to unlock secrets hidden in the molecular structure of the sample.

But it’s a whole lot harder than scoring bull’s-eyes on ducks at a carnival booth. At LCLS, the X-ray ammo is traveling at the speed of light, can be focused to a spot more than a million times smaller than a bullet, and the targets can be more than 10,000 times smaller than the typical shooting-gallery duck.

Pulses last just quadrillionths of seconds, about the time it takes light to travel the breadth of a human hair. They’re fired 120 times per second, and in many cases have to hit tiny samples that are tumbling randomly so you can’t tell which way they’re facing when they’re hit. Each pulse can damage or destroy its target, so there are no second chances.

Raising the stakes even higher, your targets may have taken a lot of time, effort and money to produce, you may need millions of direct hits to get conclusive results for your experiment and you have only a limited time to do that. Missed shots can be the difference between discovery and disappointment.

To maximize the odds of success, SLAC researchers adapt techniques from other applications and invent new ways to precisely align, time and refresh samples, whether liquid, gas or solid, so they reliably connect with laser pulses. Here's a look at five important techniques:

Like a dripping water faucet but with more complex physics behind it, a “drop on demand” system provides a precisely measured and timed supply of tiny liquid droplets containing whole or dissolved samples.

Some of these systems in development borrow from inkjet printer technology developed in the 1970s. They can use “piezoelectric” crystals (see above), which change shape in response to electric current to precisely push out streams or droplets of liquid, or they can do this with acoustic waves or other applied pressure.

Jets are like mini squirt guns streaming samples of liquid or gel into the X-ray pulses. They’re often used to study delicate, nanoscale samples such as crystallized proteins, which offer an ideal X-ray window into a protein’s atomic structure.

The jet’s nozzle can be shaped to produce a stream of the desired thickness – for instance, to accommodate crystals of a certain size. If the nozzle is too narrow, the samples can quickly clog it. And if the stream is too thick, the liquid solution can interfere with the quality of the crystal images.

The simplest type of liquid jet, called a Rayleigh jet (see above), produces a stream as wide as its nozzle, and can also produce a flow of droplets for experiments.

A more complex jet, popular in LCLS experiments involving crystals, uses a flow of gas around the nozzle to further squeeze and narrow the liquid or gel stream. This design, called a "gas dynamic virtual nozzle" or "flow focusing" jet (see above), can create unbroken streams of liquid just millionths of an inch wide.

Read about an experiment that used a "virtual nozzle" liquid jet.

If you want to reduce the amount of liquid surrounding samples – as you might when studying living viruses, cells or cell components – you can spray them from an aerosol jet, which produces a fine mist like the one from a perfume bottle. These aerosols may be propelled by gases or produced by electric currents that break sample-containing liquid into sprays of tiny droplets.

Another sophisticated tool that’s been customized for LCLS is the aerodynamic lens system (see above). It uses streams of gas and a series of gun-like chambers to produce very narrow streams of liquid and a more regular spacing of samples. This allows researchers to deliberately hit and study individual particles.

Read about an experiment that used an aerosol jet.

Researchers can study the properties of materials, such as the strength of exotic metals exposed to extreme temperatures and pressures, with motorized platforms called translation stages (see above) that rapidly move samples in a gridded pattern to continually expose fresh sections to the X-ray laser pulses.

While this method was in use prior to LCLS, it had to be customized to match the high repetition rate of LCLS pulses.

Read about an experiment that used a translation stage.

View a Flickr photo gallery of a new lab at SLAC that allows scientists to test out different sample techniques at the Linac Coherent Light Source X-ray laser.