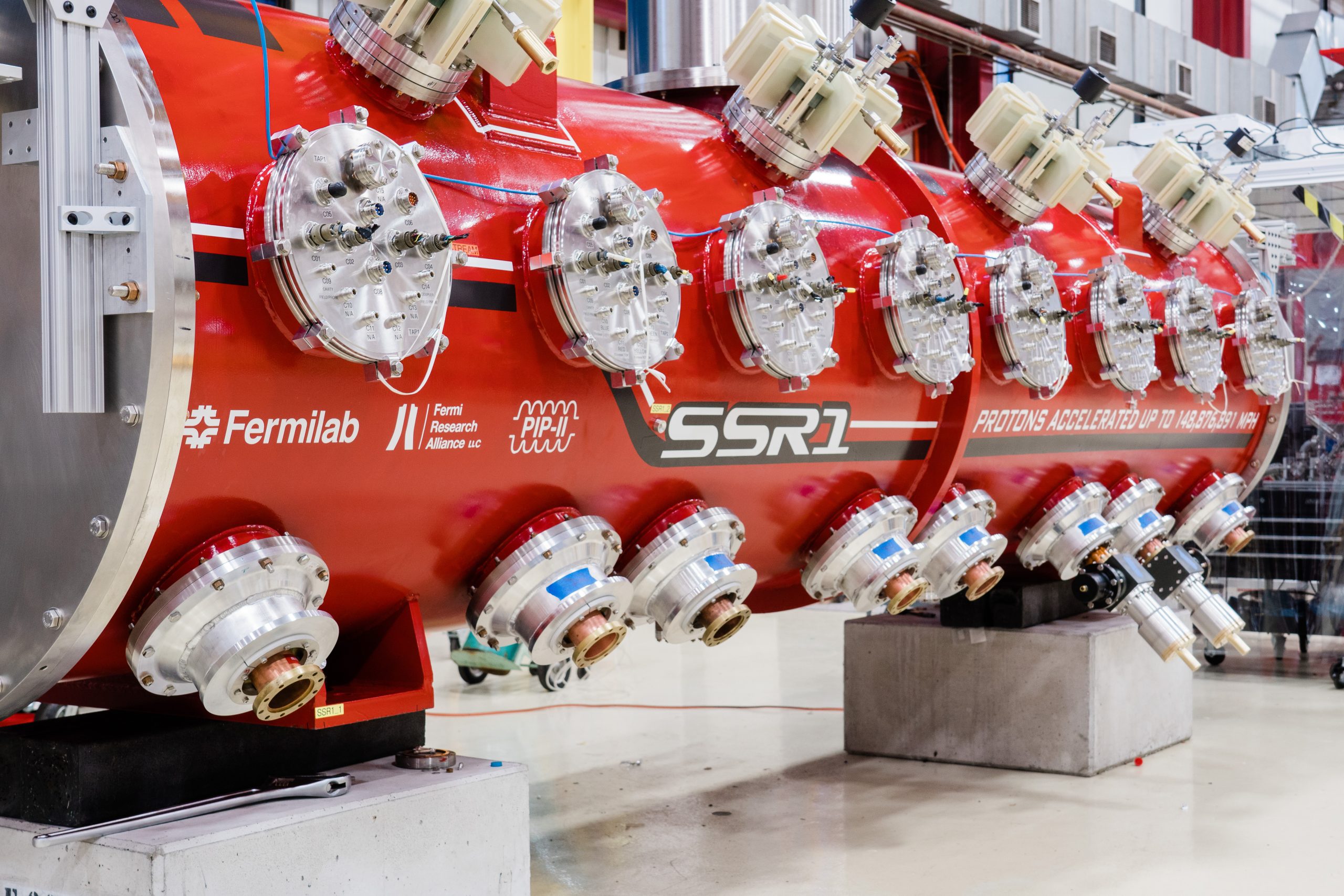 Cryomodules are the largest components of a superconducting particle accelerator. They house structures called superconducting accelerator cavities, which are lined up end-to-end inside the cryomodule. These cavities boost the energy of a particle beam as it travels through one after the next. This is the SSR1 cryomodule of the PIP-II accelerator.

Collaborators on development of the PIP-II cryomodules hold a Zoom meeting to discuss aspects of the SSR1 prototype design.

Newswise — With people around the world working from home during these unprecedented times, many Fermilab employees are working remotely, and this includes work on the design of Fermilab's PIP-II accelerator. While certain aspects of the accelerator project can be carried out only in a laboratory, such as making and testing components, the international team of engineers and scientists can advance other aspects, like component design and working on the machine's detailed blueprints, from their home offices.

In many ways, years of videoconferencing with their international partners has prepared the team to continue making progress from home.

This is especially true for those who are designing the PIP-II cryomodules, large metal structures that keep superconducting accelerator components chilled to just a few degrees above absolute zero as they propel protons to close to the speed of light. Researchers and engineers from five countries have been collaborating on the design and construction of these cryomodules, work that has remained relatively uninterrupted during the lab's teleworking period.

Ramping up energy, cooling down cavities, working across borders

Cryomodules are the largest components of a superconducting particle accelerator. They house structures called superconducting accelerator cavities, which are lined up end-to-end inside the cryomodule. These cavities boost the energy of a particle beam as it travels through one after the next.

PIP-II’s accelerator cavities are made of niobium, a material that becomes superconducting at ultracold temperatures. Like a high-tech refrigerator, the cryomodules that house the PIP-II cavities cool the cavities down to minus 271 degrees Celsius and keep them at that temperature.

The new accelerator will help generate the world’s most powerful neutrino beam for the international Deep Underground Neutrino Experiment, hosted by Fermilab. It will also provide intense proton beams for the lab's future experimental programs.

A truly global effort, PIP-II is the first particle accelerator project in the U.S. with significant international contribution. Engineers from France, India, Italy, the United Kingdom and United States are working together to design and build the cryomodules, and engineers from Poland are working on the cryogenics distribution system for the new accelerator.

When complete, the entire 700-foot-long PIP-II accelerator will have a total of 23 cryomodules. Each of the accelerator's five cryomodule designs will boost the energy of the protons, finally achieving 800 million electronvolts and propelling the particles to 84% of the speed of light. After exiting the PIP-II accelerator, the beam will enter the Fermilab accelerator chain for further acceleration, and then the protons will smash into a target to produce neutrinos.

The new accelerator is analogous to an airport runway. When a plane takes off, passengers experience an initial jolt of acceleration, after which the plane continuously ramps up in speed. Similarly, the ion source and front end of the PIP-II accelerator provide the initial acceleration for the particle beam, which then enters the string of 23 cryomodules, each one providing a set boost.

The first cryomodule houses a cavity known as the HWR (half-wave resonator), a type of accelerating structure used in the early stages of particle acceleration. The only one of its kind in the PIP-II accelerator, the cryomodule was developed by Argonne National Laboratory and is currently scheduled to undergo testing at Fermilab. The next stage of acceleration deploys a cryomodule that houses a different type of cavity called the SSR1 (single-spoke resonator 1). It was recently completed at Fermilab with the help of collaborators from India.

“We were about to begin testing of the SSR1 cryomodule, but all hands-on activities are currently paused,” said Fermilab engineer Donato Passarelli.

Instead, engineers on the project have focused their current efforts on the design and planning activities. They have learned to adapt to the challenges of doing design work remotely.

“As mechanical engineers, we usually print all of our design drawings and edit them directly,” said Fermilab engineer Vincent Roger. “It’s now necessary to scan the edited drawings to send the corrections to the drafter as well. It makes the process slightly longer, but it’s still an efficient way to keep track of changes.”

The nature of international collaboration has also allowed the team to more easily transition into a remote work schedule. Colleagues on the project from different countries rarely get to interact in person and so typically interact through email or online meetings.

“Of course, it’s always easier when my colleagues are in the same corridor,” Roger said. “During this period, we’ve adjusted by organizing more meetings, many of which are very short. Sometimes it’s just a five-minute meeting to share a concept and get feedback.”

The first two PIP-II cryomodules have been installed at a PIP-II prototype test facility awaiting testing. First beam is expected later this year, and the installation of all cryomodules in their final location is planned to be complete in the mid-2020s, when the PIP-II accelerator is also scheduled to come online.

"As partners in an international project, PIP-II collaborators are fluent in online coordination, so we're well-equipped to carry on the work of cryomodule design remotely," said PIP-II Project Director Lia Merminga of Fermilab. "Every day brings us closer to the moment when we'll realize this world-class accelerator, and that will not only be an achievement for Fermilab and its partners, but also a testament to the fruits of global cooperation."

Work on the PIP-II project is supported by the Department of Energy Office of Science and receives contributions from partners in France, India, Italy, Poland, the United Kingdom and United States.

Caption: Cryomodules are the largest components of a superconducting particle accelerator. They house structures called superconducting accelerator cavities, which are lined up end-to-end inside the cryomodule. These cavities boost the energy of a particle beam as it travels through one after the next. This is the SSR1 cryomodule of the PIP-II accelerator.

Caption: Collaborators on development of the PIP-II cryomodules hold a Zoom meeting to discuss aspects of the SSR1 prototype design.