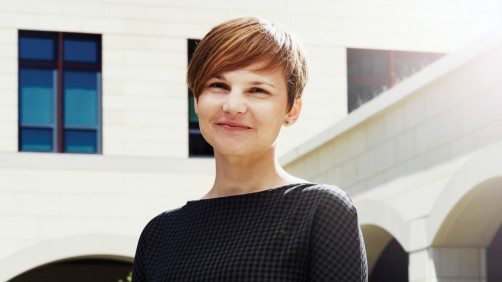 Newswise — Aleksandra Vojvodic has been named one of MIT Technology Review’s 2016 Innovators Under 35, which honors exceptionally talented technologists whose work has great potential to transform the world. A staff scientist at the Department of Energy’s SLAC National Accelerator Laboratory, she has spent the past six years working at the SUNCAT Center for Interface Science and Catalysis, where she uses theory and computation to help design better catalysts for reactions that generate and store clean energy.

We took this opportunity to catch up with Vojvodic, who is about to assume a faculty position with the University of Pennsylvania, and find out more about her work.

First off, congratulations on your award!

Thank you! It’s a huge honor to be recognized and to get to publicly talk about and share the work that I’ve done, and also to get in contact with similarly minded people who are at the forefront of what science, engineering and technology can do today. That’s something I really look forward to.

What have you been doing at SLAC and SUNCAT?

I came to SUNCAT in 2010 as a postdoctoral researcher, and since then I have seen the institute’s theory group grow from five to perhaps 50 people. It’s been a great journey, and it has allowed me to grow as a scientist. I’ve had a chance to lead my own subgroup within the center focusing on certain complex materials chemistries, as well as supervise postdocs and co-supervise PhD students. As a staff scientist, my main role has been doing research.

How do theory and computation figure into finding new catalysts for clean energy generation and storage?

One of today’s big challenges is finding ways of storing energy from the sun – from wind and solar energy – so it can be used at any time. This is what plants do during photosynthesis. Catalysts promote these energy storage reactions and allow them to proceed efficiently. But we need much more efficient catalysts if we are going to store renewable energy on a grand scale.

Only recently have computers been powerful enough to solve the quantum mechanical equations in a manageable amount of time that allow us to model and predict how catalysts and other materials will work. That’s a big, big breakthrough over the past five or 10 years. Today we can understand what’s going on at the atomic level of the materials with the help of the computers. And we can use that to predict the properties of catalytic materials, which our colleagues on the experimental side can synthesize and test to see how they perform and prove or disprove our theoretical and computational predictions.

This has also enabled us to create databases that we can utilize to look for catalysts with specific properties to promote certain reactions that were impossible before, or that make reactions more efficient. So the search for new, more efficient catalysts has slowly moved from trial and error to predictability.

As far as computers, we use everything from computing clusters at Stanford and SLAC to DOE facilities, like the National Energy Research Scientific Computing Center operated by Lawrence Berkeley National Laboratory and DOE.

A lot of my focus has been on finding and improving catalysts for splitting water into oxygen and hydrogen; the hydrogen can then be stored and used as fuel. This requires two chemical reactions, and I have done a lot of work on the oxygen-generating step, which has been the least efficient part of the process until now. Recently I helped lead a team that developed a new, Earth-abundant catalyst that could promote this oxygen-generating step much more efficiently, and that work included both a theoretical computational approach and an experimental effort.How did you get involved in this area of science?

I think I’ve always had the asking-too-many-questions approach to life, which was quite annoying to some (laughs). But the problem-solving thing was something I always liked. I took science and math throughout school. In high school I thought I might study chemistry, but in college I had an inspiring physics teacher. His idea was that chemistry was just part of physics, which I didn’t agree with then and don't agree with now, either, but at the molecular level the borderline between these two is literally very fuzzy, and that is very appealing to me.

As I got my master’s degree in physics and PhD in applied physics, I realized how connected these fields are, and that’s something I’ve really enjoyed.

Since then I have worked with people from materials science, chemical engineering, electrical engineering and mechanical engineering, people with different skill sets and backgrounds, but we’re complementing each other and working toward the same goals. The scientific and technological challenges are many and large, something that has to be worked on and solved by a lot of minds, and I could contribute a piece to the puzzle, and that was also very appealing.

What’s next for you?

On Sept. 1 I start a faculty position as an assistant professor in the Chemical and Biomolecular Engineering Department at the University of Pennsylvania. It’s an extremely exciting time. There are so many challenges ahead that are waiting to be solved.