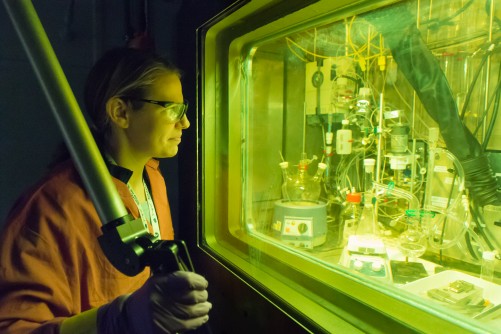 Argonne Chemist Amanda Youker operates a remote manipulator arm in a radiation-shielded cell. The cell is used for the purification of molybdenum-99 in a process recently demonstrated by Argonne that could lead to a domestic source of the important medical isotope. 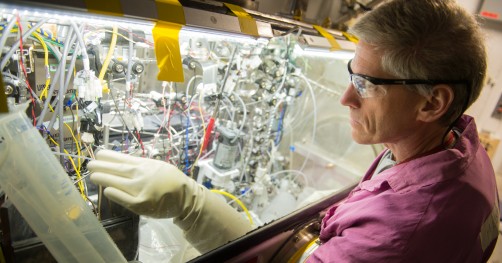 Argonne Scientific Associate James Byrnes performs maintenance on a remote system that is used to recover molybdenum-99 from an irradiated target in a process recently demonstrated by Argonne. The operation is performed remotely due to high radiation fields in the target.

Newswise — ARGONNE, Ill. (June 15, 2015) – The effort to secure a stable, domestic source of a critical medical isotope reached an important milestone this month as the U.S. Department of Energy's (DOE) Argonne National Laboratory demonstrated the production, separation and purification of molybdenum-99 (Mo-99) using a process developed in cooperation with SHINE Medical Technologies.

The SHINE process uses fast neutrons to bombard an aqueous solution of uranium, creating fission products that include Mo-99, which is the parent isotope of technetium-99m (Tc-99m), the most widely used radioisotope in medical diagnostic imaging. SHINE is one of two private industry partners working with Argonne to develop domestic sources of Mo-99 in research funded by the National Nuclear Security Administration (NNSA). In its partnership with NorthStar Medical Radioisotopes, Argonne is providing its technical expertise on two different processes to meet the Mo-99 need.

“The development of techniques for domestic production of Mo-99 is a critical national priority and one fully supported by our work at Argonne,” said George Vandegrift, an Argonne Distinguished Fellow who leads the Mo-99 development efforts. “Millions of patients each year rely on Mo-99 for life-saving diagnostic procedures, but the stability and safety of that supply is threatened by a variety of factors.”Mo-99 production faces several issues, beginning with its traditional production method using highly enriched uranium (HEU) in research reactors. HEU presents a risk of nuclear weapons proliferation, so NNSA has focused on the development of other methods for Mo-99 production and conversion of reactors to use low-enriched uranium (LEU). Mo-99 is also not produced in the United States, leaving the country to rely on isotopes from other sources in other countries, including a Canadian research reactor that will cease regular production next year, reducing the global supply. The short half-life of Mo-99 and its decay product, Tc-99m, makes timely global transportation of the isotope a challenge.

Tc-99m is used as a radioactive tracer element in more than 40 million medical diagnostic procedures each year, including heart stress tests and bone scans. The isotope is created when Mo-99 spontaneously decays through the release of a beta particle from its nucleus. Because of its unstable nature, Mo-99 does not occur naturally and must be created using various techniques.

The SHINE process demonstration bombarded an LEU uranyl sulfate solution with fast neutrons generated using Argonne’s linear accelerator, breaking the LEU down into hundreds of isotopes, including Mo-99, which originates in six percent of the fissions created in the process. The Mo-99 must then be separated from the other fission products before it can be transported for use. Argonne’s analysis of the Mo-99 from the demonstration showed it met the purity specifications of the industry standard, the British Pharmacopoeia.

Argonne also supports NorthStar’s process to modify stable isotopes of molybdenum to create Mo-99. In one process, enriched Mo-98 targets are bombarded with neutrons, resulting in neutron capture and creation of Mo-99. In the other, enriched Mo-100 targets are bombarded with X-rays from an electron linear accelerator, expelling a neutron from the nucleus to create Mo-99.

Argonne will continue working with both companies to demonstrate the feasibility of their processes as SHINE and NorthStar look to commercialize the production of Mo-99.“This is a complicated undertaking, but given the medical need and national security implications, it is an effort Argonne is proud to be involved with,” said Mark Peters, associate laboratory director for Energy and Global Security at Argonne. “This type of public-private partnership on issues of national importance demonstrates the benefits that can come from the work of our national labs.”

Argonne National Laboratory seeks solutions to pressing national problems in science and technology. The nation's first national laboratory, Argonne conducts leading-edge basic and applied scientific research in virtually every scientific discipline. Argonne researchers work closely with researchers from hundreds of companies, universities, and federal, state and municipal agencies to help them solve their specific problems, advance America's scientific leadership and prepare the nation for a better future. With employees from more than 60 nations, Argonne is managed by UChicago Argonne, LLC for the U.S. Department of Energy's Office of Science. DOE’s Office of Science is the single largest supporter of basic research in the physical sciences in the United States, and is working to address some of the most pressing challenges of our time. For more information, please visit science.energy.gov. 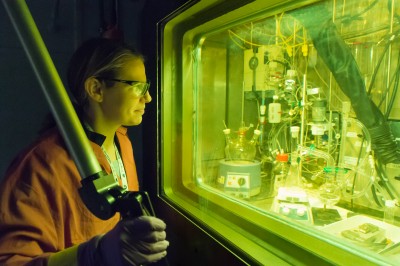 Caption: Argonne Chemist Amanda Youker operates a remote manipulator arm in a radiation-shielded cell. The cell is used for the purification of molybdenum-99 in a process recently demonstrated by Argonne that could lead to a domestic source of the important medical isotope. 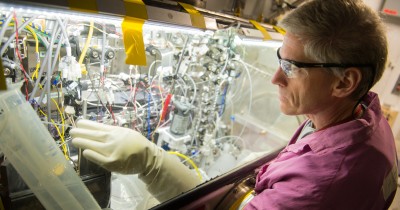 Caption: Argonne Scientific Associate James Byrnes performs maintenance on a remote system that is used to recover molybdenum-99 from an irradiated target in a process recently demonstrated by Argonne. The operation is performed remotely due to high radiation fields in the target.