Energy storage, which has revolutionized consumer electronics, is poised to change the way we drive our cars and the way we generate and use electricity. Argonne is leading the way in ushering in this change. 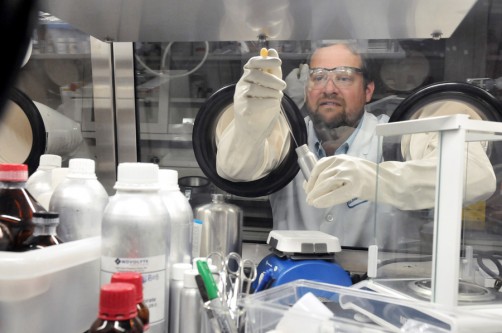 At stake in these endeavors, say officials at the U.S. Department of Energy’s (DOE) Argonne National Laboratory, are cell phones that hold longer charges, more affordable and efficient electric cars, power grids that store electricity, and small but dependable power packs for the military.

“We are fully committed to working with industry, and we have a significant and successful track record to show that.”

“The harnessing of renewable energy and improvement of energy storage systems will be key in supplying sustainable energy to the planet in the 21st century and beyond,” said Michael Thackeray, Argonne Distinguished Fellow and materials scientist.

Argonne, a global leader in battery research, will highlight its array of cutting-edge work – including its revolutionary Nickel Manganese Cobalt (NMC) blended cathode structure – during Battery Industry Day on Wednesday, June 14. More than 100 industry representatives have registered for the daylong event, which will feature presentations, networking and tours of Argonne’s battery laboratories.

“We are open for business in energy storage research,” said Suresh Sunderrajan, Argonne’s interim associate laboratory director for Science and Technology Partnerships and Outreach. “We continue to push the envelope in advancing and developing new energy storage technologies. We invite industry participants and other stakeholders to connect with us to move exciting new developments to market.”

Although Argonne is a federally funded laboratory, it has well-established processes for developing fruitful industry collaborations and for licensing valuable intellectual property such as its NMC technology, said Venkat Srinivasan, director of Argonne’s Collaborative Center for Energy Storage Science (ACCESS).

“We are fully committed to working with industry, and we have a significant and successful track record to show that,” Srinivasan said.

The laboratory’s unique capabilities in battery processes and materials have attracted interest from companies that range from material suppliers and cell manufacturers to battery recyclers and end-use device developers, he noted. In 2011, General Motors Co. equipped its Chevrolet Volt with a battery based on the NMC cathode technology that it licensed from Argonne. The laboratory continues to focus its battery research on manganese-rich lithium materials.

“The rest of the world is going nickel-rich, but manganese is less costly than nickel and it’s less toxic and safer to use than nickel and cobalt,” noted Thackeray, whose many honors include the University of Chicago Distinguished Performance Medal for contributions to lithium battery technology. The university operates the laboratory for DOE’s Office of Science through UChicago Argonne, LLC.

Argonne’s NMC technology works by shuttling positively charged lithium ions between two electrodes when extracting energy from a battery and when recharging it.

Early NMC technology had troubles with structural and electrochemical instabilities that resulted during repeated charge and discharge of the battery. Argonne researchers achieved a breakthrough in the late 1990s by adding a small amount of a lithium-manganese-oxide stabilizer that enabled a higher energy output over hundreds of charge/discharge cycles.

“But if we can charge the battery at 4.5 volts, we can probably get 25 percent more capacity out of the system,” Johnson said. And that is where the blending comes in.

“You need optimal energy for a car battery, but you also want optimal safety and stability over time,” said Johnson, who will participate in a panel discussion on Battery Industry Day. “There are compromises.”

A blend that offers a good combination of safety, performance and energy capacity seems to be five parts nickel to three parts manganese to two parts cobalt.

“Every time you change the nickel-manganese-cobalt ratio, you have to alter the lithium content as well, and that can be tricky,” Johnson explained.

Argonne researchers aim to add larger quantities of the lithium-manganese-oxide stabilizer to their NMC systems to further increase the shuttling of lithium, “but there are still instability problems with materials that are manganese-rich,” Thackeray said. He and his associates are working to alleviate these problems by adding an additional stabilizing component—spinel—to the manganese-rich NMC structures.

Another strategy is to exploit oxygen electrochemistry in the NMC material to increase the energy output in a ‘hybrid’ lithium-ion/lithium-oxygen cell. That feat will be challenging, however, one that Thackeray likens to “shooting for the moon.”

The enticing payoffs, however, would be batteries with higher charge densities and longer lifetimes which, when used in applications ranging from cell phones to electric cars to electric grid storage, offer economic growth, energy independence and more secure energy sources for the nation.

“The importance attached to energy storage and renewables is what keeps us enthused about what we’re doing,” Thackeray said.

Argonne’s research on battery science and technology is supported by DOE’s Office of Science and its Office of Energy Efficiency and Renewable Energy Vehicle Technologies Office. 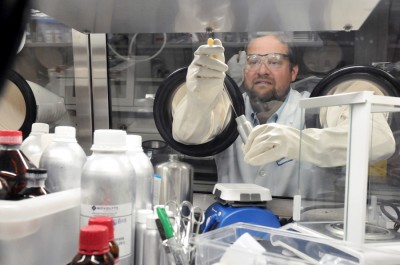