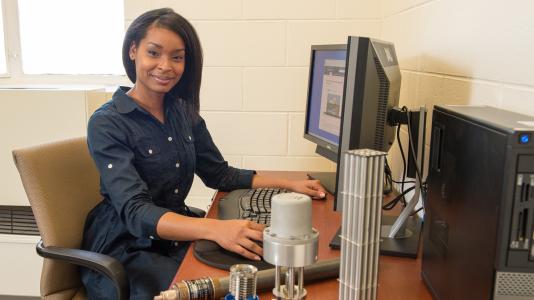 Newswise — J’Tia Hart, a nuclear engineer working in nonproliferation at the U.S. Department of Energy’s (DOE) Argonne National Laboratory, has been honored as one of Crain’s Chicago Business’s “40 Under 40,” an annual list of young leaders in a variety of fields.

Hart was selected both for her scientific accomplishments and for her extensive outreach. In September, Hart was also named an IF/THEN ambassador by the American Association for the Advancement of Science, working to inspire talented young women to pursue careers in science, mathematics, engineering and technology (STEM).

“A really important goal for me is to be a role model for other people to find their places in STEM and national security.” — J’Tia Hart, Argonne nuclear engineer

“Basically, recognition like being named to the ‘40 under 40’ list helps to reinforce that my outreach and advocacy is important, and helps it make more of an impact,” Hart said. “A really important goal for me is to be a role model for other people to find their places in STEM and national security, and to show other people who look like me that they can exist and excel in these fields.”

Hart currently serves as a program lead in the Strategic Security Sciences Division at Argonne, where she directs analysis covering nuclear energy and safety, energy security and cybersecurity to inform government policies. Before rejoining Argonne in March, she served as an executive briefer to the Secretary of Energy in the Department of Energy's Office of Intelligence and Counterintelligence, and also led analysis on nuclear proliferation, foreign nuclear energy programs, and nuclear fuel cycle issues.

Hart holds a degree in industrial engineering from Florida State University and a master’s and doctoral degree in nuclear engineering from the University of Illinois at Urbana-Champaign. She has published academic articles and book chapters on unconventional reactors, nuclear economics, the nuclear fuel cycle and international energy development.

Hart has long been committed to using her leadership skills and sharing her experiences in outreach to encourage the next generation. She currently serves as co-chair of the Argonne/ACT-SO High School Research Program, an in-depth research, mentoring and enrichment program highlighting the talents of African-American high school students.

Hart has also been nationally recognized for her outstanding leadership and technical accomplishments by the past two presidential administrations as a White House Fellowship finalist, and with the Department of Energy Exceptional Service Award and the Secretary of Energy's Appreciation Award.