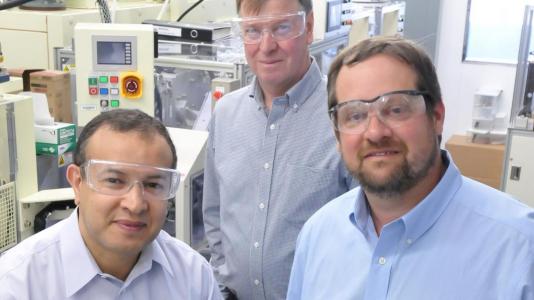 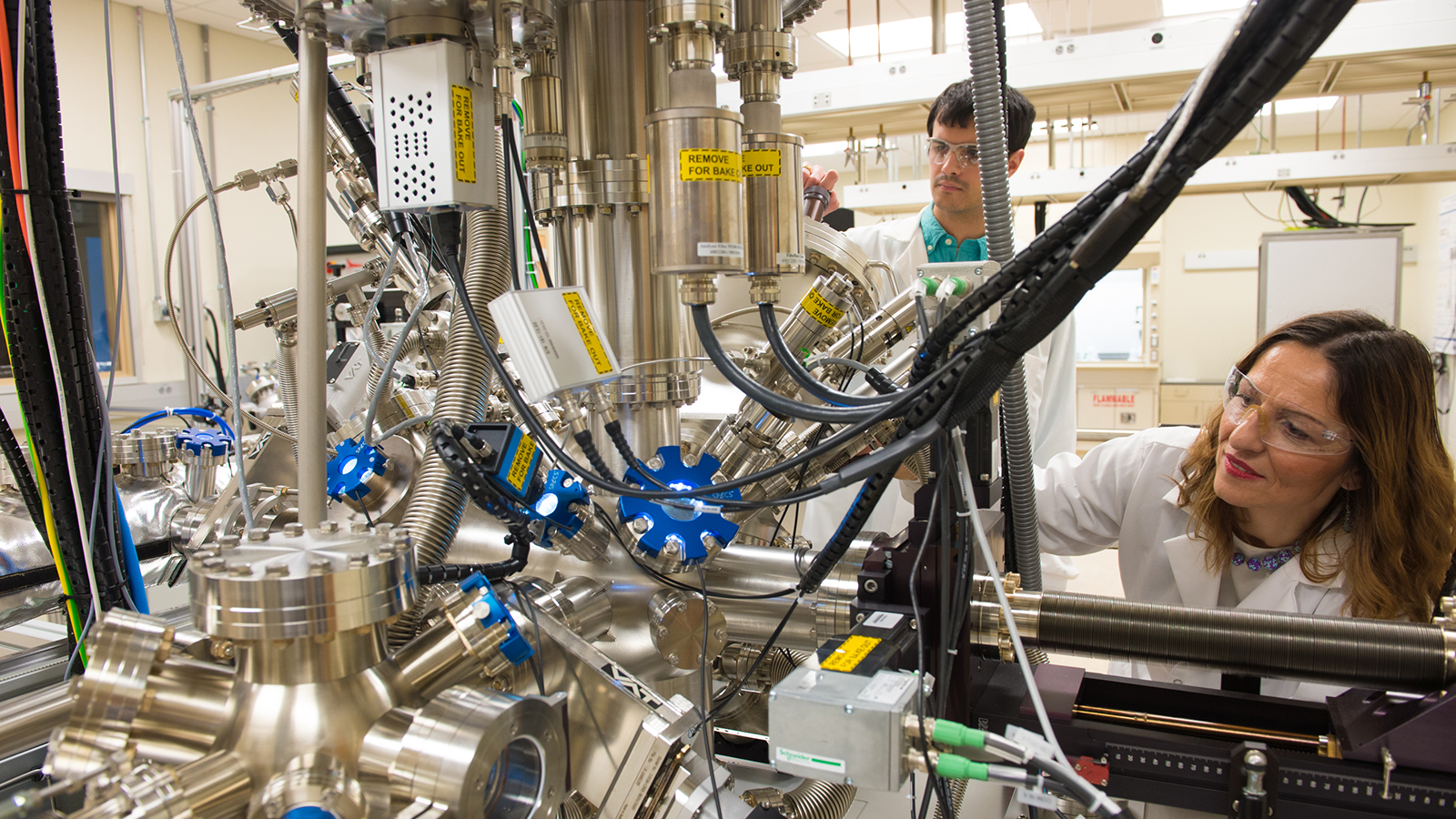 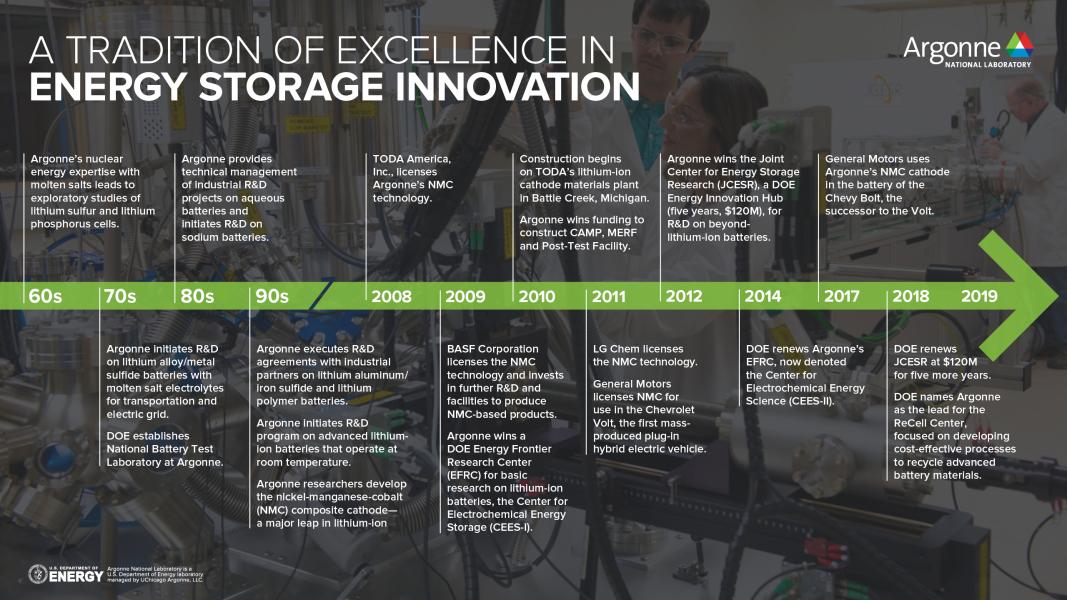 Newswise — Argonne has a long and distinguished history of research on lithium-ion batteries and, through emeritus Argonne Distinguished Fellow Michael Thackeray, a personal connection to a 2019 Nobel Prize winner, John Goodenough.

A roar of approval rang out at the U.S. Department of Energy’s (DOE’s) Argonne National Laboratory upon the announcement in October that John B. Goodenough, M. Stanley Whittingham and Akira Yoshino had won the 2019 Nobel Prize in Chemistry. On December 10th in Stockholm, they received this highly coveted prize for their major contributions to the invention of the lithium-ion battery, which is a long-standing major focus of research at Argonne.

Sony commercialized this lightweight, rechargeable battery in 1991. Today, it powers our current wireless society teeming with cell phones, tablets and laptops, as well as other portable electronics.

In the mid-1990s, the groundbreaking research of Goodenough, Whittingham and Yoshino had a major impact on the direction of the battery program at Argonne, spurred in part by the arrival of Michael Thackeray, currently emeritus Argonne Distinguished Fellow in the Chemical Sciences and Engineering (CSE) division. Thackeray had served as a postdoc for Goodenough at Oxford University in 1981-1982. At that time, Thackeray and Goodenough invented a manganese spinel cathode that was cheaper and safer than the cobalt-oxide cathode invented earlier by Goodenough, though it suffered from poorer performance. Subsequently, Thackeray, while at the Council for Scientific and Industrial Research (CSIR) in South Africa from 1983 to 1994, continued to discover and develop new cathode materials for lithium-ion batteries.

Upon Thackeray’s arrival in 1994, Argonne already had in place a robust program focused on developing an advanced ​“molten salt” battery, a much different type of battery than the lithium-ion technology in terms of its electrode and electrolyte materials.  This battery has an energy storage capability high enough to power electric vehicles and serve as supplementary power for the electric grid during peak-use hours. Its main drawback is that the need to keep the electrolyte salt melted requires battery cell maintenance at a very high temperature, above 750 degrees Fahrenheit. This necessitates a complex and reliable heat management system. By contrast, the lithium-ion battery operates well at temperatures from just below freezing to several tens of degrees above room temperature.

Working in collaboration with other Argonne researchers and building on his earlier research at Oxford and CSIR, Thackeray made a pivotal discovery — a lithium-rich nickel-manganese-cobalt oxide (known as ​“NMC”) cathode that provided a noticeable improvement in performance, reliability and safety over the then-current lithium-ion technology. The other Argonne inventors were Christopher Johnson and Khalil Amine, both Argonne Distinguished Fellows in the CSE division. This NMC cathode was a major breakthrough because it furthered the use of lithium-ion batteries in electric vehicles and other applications.

“Our idea was to introduce a ​‘stabilizing’ component in the NMC cathode,” Thackeray said. ​“It serves as a support to help keep the structure intact after the lithium ions depart.” This structural design provided greater electrochemical stability to the cathode, leading to significantly higher energy storage capacity.

An essential tool in the team’s success was the Advanced Photon Source, a DOE Office of Science User Facility at Argonne, which provides ultra-bright, high-energy X-ray beams for research in almost all scientific disciplines. It allowed imaging of the cathode interactions that occur at the molecular level. ​“We could even put our electrode materials in a special pouch cell compatible with X-rays and track what happens while it cycles,” Johnson said.

For commercial success, any new battery material must be manufacturable in enormous quantities at reasonable costs. Amine spearheaded the effort to ramp up the NMC synthesis process to the commercial scale. ​“You must find the exact right temperature, starting chemicals, reaction times and environment — all these have to be on target at low enough cost for commercial application,” said Amine.

Since the NMC invention, pivotal discoveries in lithium-ion batteries have continued to flow out of the Argonne battery program. ​“For example, in an international collaborative project with university researchers, we developed an advanced NMC version called the ​‘full concentration gradient’ cathode or FCG for short,” Amine said.

In each particle of FCG cathode material, the concentrations of three key ingredients (nickel, manganese and cobalt) vary in a carefully tailored way from particle core to surface to take full advantage of each element. This recipe yields even better energy storage capacity and stability during battery cycling than with the NMC cathode. The research for this discovery also benefited from the analyses possible with the X-ray beams at the Advanced Photon Source.

With more than 250 battery technologies available for licensing and thousands of publications in scientific journals, Argonne is a global leader in battery research and development, not only on advanced lithium-ion batteries but also beyond-lithium-ion systems such as sodium-ion, multivalent-ion, lithium-sulfur and lithium-oxygen.

Today, Argonne and collaborating scientists have at their disposal a unique collection of world-class facilities for battery research. There is the immense supercomputing power with the resources at the Argonne Leadership Computing Facility for theoretical modeling to predict the behavior of new or improved battery materials from the nanoscale to the mesoscale. Researchers also have access to the Advanced Photon Source, the Center for Nanoscale Materials and the Electrochemical Discovery Laboratory, where they conduct in-depth materials characterization before, during, and after a promising new electrode or electrolyte material has undergone evaluation in test cells. The Argonne Leadership Computing Facility, Advanced Photon Source and the Center for Nanoscale Materials are all DOE Office of Science User Facilities.

Additionally, there is the Cell Analysis, Modeling, and Prototyping facility for fabricating prototype electrodes and battery cells, and the Electrochemical Analysis and Diagnostics Laboratory for testing the new materials. After standardized testing, researchers can send their cell and electrodes for analysis in Argonne’s Post-Test Facility.

“At Argonne, we use the latest and greatest technologies to not just discover new materials but also scale them up and develop the properties that companies can use to commercialize them,” said Venkat Srinivasan, director of the Argonne Collaborative Center for Energy Storage Science (ACCESS). ​“We’ve been doing this work with lithium-ion batteries for many years and are now doing it with other types of advanced batteries.”

See Brief History of Argonne’s Battery Program: 1960s to Present for a timeline.

In 2009-2014, Thackeray served as the first director of CEES, a DOE-funded Energy Frontier Research Center led by Argonne in partnership with Northwestern University, University of Illinois and Purdue University. The CEES mission has been to explore the fundamental chemistry and materials underlying lithium-ion batteries. As testament to Thackeray’s foundational leadership, in 2019, DOE awarded CEES a ​“Ten at Ten” Award for having made a major impact on scientific ideas, technologies and tools, and people.

“These advances in CEES reflect our continued efforts to push the very limits of lithium-ion battery technology, even beyond the current capabilities which already have been transformational for society” said Paul Fenter, Director of CEES since 2014.

Since the founding of JCESR in 2012 as one of DOE’s Energy Innovation Hubs, Goodenough has worked in an important advisory capacity. Led by Argonne, JCESR is a unique partnership made up of multiple national laboratories, universities and industrial firms. Its founding mission was to create beyond-lithium-ion energy storage technologies that will transform transportation and the electric grid. In 2018, JCESR received the Secretary of Energy’s Achievement Award for having ​“literally and figuratively changed the formula for developing next-generation batteries.”

Argonne is also home to DOE’s ReCell Center, another partnership composed of national laboratories, universities, and industrial firms. As announced by DOE in January of this year, its main mission is cost-effective recycling processes to recover lithium battery critical materials. These critical materials include the lithium and cobalt in the cathode.

“America’s dependence on foreign sources of critical materials undermines our energy security and national security,” stated U.S. Secretary of Energy Rick Perry in the January announcement. The ReCell Center is addressing this issue for the critical materials from lithium-based batteries used in not only transportation but also consumer electronics, defense and stationary energy storage.

The 2019 Nobel Prize recognized the truly transformational impact of batteries — as readily apparent by the ubiquity of small lithium-ion batteries in portable electronics. Drawing upon that foundational research conducted in the 1970s and 1980s, Argonne contributed in a major way to the initial successful adoption of large lithium-ion batteries for electric vehicles.

“The lithium-ion battery research captures the value of innovative, out-of-the-box thinking for charting society’s future. It is an inspiration and a beacon to the next generation innovators who will take energy storage and its applications to new levels of impact,” said George Crabtree, JCESR director. (Read an interview with Crabtree and Srinivasan about the Nobel Prize and the future of energy storage.)

Researchers at Argonne and elsewhere are now racing to develop the next generation of battery — super-batteries that are a leap beyond the current lithium-ion. Such batteries will one day lead to a more energy-secure future, highly resilient and efficient electrical grids via the storage of solar and wind energy, and more widespread adoption of electric vehicles and even, possibly, electrical-powered flight.