Their work uses machine learning to transform the way scientists tune particle accelerators for experiments and solve longstanding mysteries in astrophysics and cosmology. 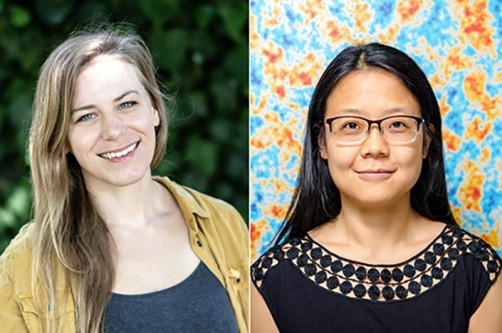 Auralee Edelen (left) and Wai Ling Wu have been named the 2020 Panofsky Fellows at the Department of Energy’s SLAC National Accelerator Laboratory. Both are harnessing the power of machine learning to make progress in their fields. Edelen’s research focuses on transforming the way scientists tune particle accelerators for experiments, while Wu is working to solve longstanding mysteries in astrophysics and cosmology.

Newswise — Auralee Edelen and Wai Ling “Kimmy” Wu have been named the 2020 Panofsky Fellows at the Department of Energy’s SLAC National Accelerator Laboratory. Both are harnessing the power of machine learning to make progress in their fields. Edelen’s research focuses on transforming the way scientists tune particle accelerators for experiments, while Wu is working to solve longstanding mysteries in astrophysics and cosmology.

The Panofsky Fellowship, named after SLAC’s founder and first director Wolfgang K. H. “Pief” Panofsky, recognizes exceptional early-career scientists who would most benefit from the opportunity to do their research at the lab, providing generous funding for five years of research and an opportunity for continuing appointment at SLAC.

Edelen, who came to SLAC in 2018 after working with the DOE’s Fermi National Accelerator Laboratory (Fermilab), says that even as a kid she was fascinated by how problems are solved in natural systems – for instance the way plant roots transport water and nutrients from the ground efficiently, or the way ant colonies search for food. In high school, she remembers reading about how scientists use algorithms to solve problems by mimicking these sorts of natural processes.

“I thought it was so cool that not only are these elegant solutions present in nature,” she says, “but people can take inspiration from them and apply them to hard problems that they wouldn't know how to solve otherwise.”

In her education, Edelen followed a path towards applied physics and complex systems control while maintaining a fascination with cognitive science and algorithms. As a graduate student, Edelen spent time at Fermilab trying to improve the modeling and control of particle accelerators, which produce beams of particles for a wide range of applications such as targeting cancerous tumors with proton therapy and investigating complex chemical processes.

“That was my first introduction to this whole world of particle accelerators,” Edelen says. “I got to see how beautiful and chaotic the control room can be with everybody trying to optimize the beam and troubleshooting what happened when something goes wrong.”

At particle accelerators, applications and experiments require custom beams of different energies and shapes, but the process of manipulating the beam can be challenging and laborious. Through her work, Edelen hopes to design better tools to customize beams for experiments with machine learning.

“The way that we try to tune the beam is based on initial guesses from what we understand about the physics and previous similar setups,” Edelen says. “At the end of the day, we rely heavily on human operators to adjust the accelerator settings until things look good enough for a particular experiment. Operators learn intuitively over time how to control the process, creating their own internal set of heuristic tuning algorithms along the way. Some expert operators learn to tune the beam extremely well, which hints that it might be possible to use the information that is already available to improve automated tuning algorithms. Machine learning can help us do that and may also enable finer control over the beam than we can achieve at present.”

Using machine learning, Edelen hopes to optimize the tuning process in a way that uses information from past experiments but can also adapt as scientists use new experimental set-ups.

“There are a lot of different ways to incorporate machine learning into accelerator modeling and control,” Edelen says. “The area that I'm really interested in pushing on is trying to use artificial neural networks, which are very loosely inspired by the biological neural networks in the human brain, to use the vast amount of complicated information from the accelerator more directly in tuning. By making better use of the information we already have at our fingertips, we may be able to craft higher-quailty custom beams. In addition to making it easier to switch between experimental setups, enhanced beam quality and control could create opportunities for new kinds of experiments and applications.”

Edelen is particularly excited about the freedom this fellowship will give her to explore new ways to optimize particle accelerator operations using machine learning and neural networks.

“Here at SLAC, there's so much enthusiasm for new ideas and cutting-edge approaches to solving hard problems, and we’ve also got a great team of people who are working together on various machine learning applications for accelerators. Having the lab make this investment in the field is very exciting,” Edelen says. “I think one of the best things any researcher could ask for is the flexibility and freedom to pursue a topic they’re passionate about and think will have a meaningful impact.”

Wu’s Panofsky Fellowship is actually a sort of homecoming. From 2009 to 2015 she was a graduate student at Stanford University and did much of her dissertation research at SLAC working on observations of the cosmic microwave background radiation – the oldest light in the universe, which dates to about 380,000 years after the Big Bang. While its glow is almost completely even across the sky, physicists discovered tiny variations in the CMB in the 1990s that have already yielded important clues about the structure of the early universe, among them hints about how matter clumped together early on to seed the formation of galaxies including our own Milky Way.

Yet a number of questions about the early universe remain. One issue Wu is pursuing is tensions within the standard model of cosmology, which is known as Lambda-CDM. Notably, measurements of how fast the universe is expanding based on the CMB don’t agree with those obtained with other techniques, such as carefully measuring pulsating stars called cepheids. Working with some of the leaders in developing CMB experiments at SLAC, Wu hopes to sort out if the discrepancy could result from systematic errors built into CMB observations or if it is instead a sign of new, not yet understood physics.

“The CMB really helps us tie together observations from other regimes and ask whether Lambda-CDM is right,” Wu says.

Another of Wu’s goals is to search for evidence in support of the theory of inflation, a hypothesized period in which the universe blew up like a balloon – albeit a balloon expanding faster than the speed of light. If some form of inflation is correct, gravitational waves produced during the faster-than-light expansion should have left an imprint in the form of a swirling pattern of polarized CMB light known as B modes.

But finding B modes is a challenging task. The largest variations in the otherwise smooth CMB – the variations that first gave scientists insight into the early universe – are on the order of one part in tens of thousands. If most models of inflation are correct, B modes from primordial gravitational waves are at least another 100 or 1000 times smaller than that.

“This is a super tiny signal,” Wu says, and as if that weren’t enough of an obstacle, there are also two sources of “astrophysical contamination,” or microwaves that could be confused for B modes – emissions from within the Milky Way and the effects that gravity itself has on the light from the CMB.

To sort out answers about inflation, the expansion of the universe and more, Wu is turning to a tool that’s relatively new to astrophysics: machine learning. For instance, she will be working on how to use techniques related to computer vision to figure out how much gravity is bending the light we see from the CMB and other microwave sources, which will yield a deeper understanding of the measurements researchers at SLAC and elsewhere make.

“The people at SLAC are really amazing,” Wu says. “With all the different teams and data, I will be able to contribute on the analysis side, and the tool building will be really fun.”