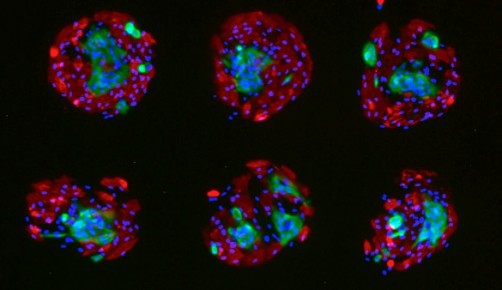 A better way to screen chemicals that may cause cancer is under development. This image shows in two dimensions what Berkeley lab scientists are working to achieve in three dimensions: cultures containing diverse cell types (seen here using red and green fluorescently labeled antibodies) in ratios and orientations observed in normal tissues.

Newswise — The vast majority of the thousands of chemicals in our homes and workplaces have not been tested to determine if they cause cancer. That’s because today’s options are lacking. Rodent tests are too slow, and cell culture tests don’t replicate how cells interact in the body, so their relevance to cancer is limited. Scientists from the U.S. Department of Energy’s Lawrence Berkeley National Laboratory (Berkeley Lab) have set out to change that.

They’re developing a more lifelike cell culture that could help researchers better identify chemicals that increase breast cancer susceptibility. The scientists will grow the culture using adult stem cells obtained from breast tissue, which has not been done before. Unlike today’s cell cultures, their test will show if a chemical causes a breakdown in cell-to-cell communication, which is a fundamental defect of cancer.

“There are many ways in which cells communicate, but these processes aren’t represented in conventional cell cultures that are composed of the same type of cell,” says Paul Yaswen, a staff scientist in Berkeley Lab’s Life Sciences Division who leads the effort with researchers from the Silent Spring Institute, Stanford University, and the University of Florida.

“But our cell cultures will have many different cell types, just like normal tissue, which will enable us to detect cell-to-cell communication as it occurs in the body,” says Yaswen.

In the first step of the project, which is just getting started, scientists will use discarded normal human breast tissue to obtain adult stem cells. They’ll then create the conditions for these stem cells to differentiate into specialized cells. Between 50 and 100 of these varied cells will form a three-dimensional, gland-like structure called an organoid that mimics the structure and function of real breast tissue.

The idea is to expose an organoid to a chemical and then watch for telltale changes that indicate the chemical could be a carcinogen, such as cell signaling gone awry.

Their stem-cell approach promises to be a big improvement over current tests that use “monocultures” of identical cells. When these cell cultures are exposed to a foreign substance such as plastic, they shut down their organ-specific functions and respond as if they’re repairing a wound. In other words, they go silent, which isn’t good if the test is intended to model carcinogenic-specific changes such as a disruption in cellular communication.

In contrast, the diverse cells in the Berkeley Lab-developed organoids will maintain their ability to produce proteins and communicate with other cells, even when the cells are exposed to a chemical. And compared to a rodent test that can take up two years, the organoids can deliver results in two weeks.

After developing the organoids, the scientists will validate them by exposing the organoids to 18 chemicals, some of which are known to cause cancer and some of which are known to be safe. They’ll also use the knowledge gained from their experiments to build mechanistic models of the interactions between hormones and DNA-damaging carcinogens in the breast.

The project is funded by a three-year, $1.8 million grant from the California Breast Cancer Research Program.