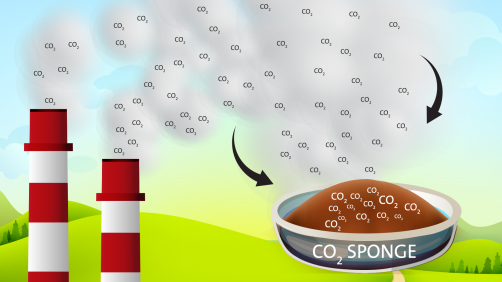 Plastic that soaks up carbon dioxide could someday be used in plant smokestacks.

EMBARGOED FOR RELEASE: Sunday, Aug. 10, 2014, 5 a.m. Eastern Time Note to journalists: Please report that this research will be presented at a meeting of the American Chemical Society.

Newswise — SAN FRANCISCO, Aug. 10, 2014 — A sponge-like plastic that sops up the greenhouse gas carbon dioxide (CO2) might ease our transition away from polluting fossil fuels and toward new energy sources, such as hydrogen. The material — a relative of the plastics used in food containers — could play a role in President Obama’s plan to cut CO2 emissions 30 percent by 2030, and could also be integrated into power plant smokestacks in the future. The report on the material is one of nearly 12,000 presentations at the 248th National Meeting & Exposition of the American Chemical Society (ACS), the world’s largest scientific society, taking place here through Thursday.

“The key point is that this polymer is stable, it’s cheap, and it adsorbs CO2 extremely well. It’s geared toward function in a real-world environment,” says Andrew Cooper, Ph.D. “In a future landscape where fuel-cell technology is used, this adsorbent could work toward zero-emission technology.”

CO2 adsorbents are most commonly used to remove the greenhouse gas pollutant from smokestacks at power plants where fossil fuels like coal or gas are burned. However, Cooper and his team intend the adsorbent, a microporous organic polymer, for a different application — one that could lead to reduced pollution.

The new material would be a part of an emerging technology called an integrated gasification combined cycle (IGCC), which can convert fossil fuels into hydrogen gas. Hydrogen holds great promise for use in fuel-cell cars and electricity generation because it produces almost no pollution. IGCC is a bridging technology that is intended to jump-start the hydrogen economy, or the transition to hydrogen fuel, while still using the existing fossil-fuel infrastructure. But the IGCC process yields a mixture of hydrogen and CO2 gas, which must be separated.

Cooper, who is at the University of Liverpool, says that the sponge works best under the high pressures intrinsic to the IGCC process. Just like a kitchen sponge swells when it takes on water, the adsorbent swells slightly when it soaks up CO2 in the tiny spaces between its molecules. When the pressure drops, he explains, the adsorbent deflates and releases the CO2­, which they can then collect for storage or convert into useful carbon compounds. The material, which is a brown, sand-like powder, is made by linking together many small carbon-based molecules into a network. Cooper explains that the idea to use this structure was inspired by polystyrene, a plastic used in styrofoam and other packaging material. Polystyrene can adsorb small amounts of CO2 by the same swelling action.

One advantage of using polymers is that they tend to be very stable. The material can even withstand being boiled in acid, proving it should tolerate the harsh conditions in power plants where CO2 adsorbents are needed. Other CO2 scrubbers — whether made from plastics or metals or in liquid form — do not always hold up so well, he says. Another advantage of the new adsorbent is its ability to adsorb CO2 without also taking on water vapor, which can clog up other materials and make them less effective. Its low cost also makes the sponge polymer attractive. “Compared to many other adsorbents, they’re cheap,” Cooper says, mostly because the carbon molecules used to make them are inexpensive. “And in principle, they’re highly reusable and have long lifetimes because they’re very robust.”

Cooper also will describe ways to adapt his microporous polymer for use in smokestacks and other exhaust streams. He explains that it is relatively simple to embed the spongy polymers in the kinds of membranes already being evaluated to remove CO­2 from power plant exhaust, for instance. Combining two types of scrubbers could make much better adsorbents by harnessing the strengths of each, he explains.

The research was funded by the Engineering and Physical Sciences Research Council and E.ON Energy.

AbstractTo impact carbon emissions, new materials for carbon capture must be inexpensive, robust, and able to adsorb CO2 specifically from a mixture of other gases. In particular, materials must be tolerant to the water vapor and to the acidic impurities that are present in gas streams produced by using fossil fuels to generate electricity. We show that a porous organic polymer has excellent CO2 capacity and high CO2 selectivity under conditions relevant to precombustion CO2 capture. Unlike polar adsorbents, such as Zeolite 13x and the metal-organic framework, HKUST-1, the CO2 adsorption capacity for the hydrophobic polymer is hardly affected by the adsorption of water vapour. The polymer is even stable to boiling in concentrated acid for extended periods, a property that is matched by few microporous adsorbents. The polymer adsorbs CO2 in a different way from rigid materials by physical swelling, much as a sponge adsorbs water. This gives rise to a higher CO2 capacities and much better CO2 selectivity than for other water-tolerant, non-swellable frameworks, such as activated carbon and ZIF-8. The polymer has superior function as a selective gas adsorbent, even though its constituent monomers are very simple organic feedstocks, as would be required for materials preparation on the large industrial scales required for carbon capture.