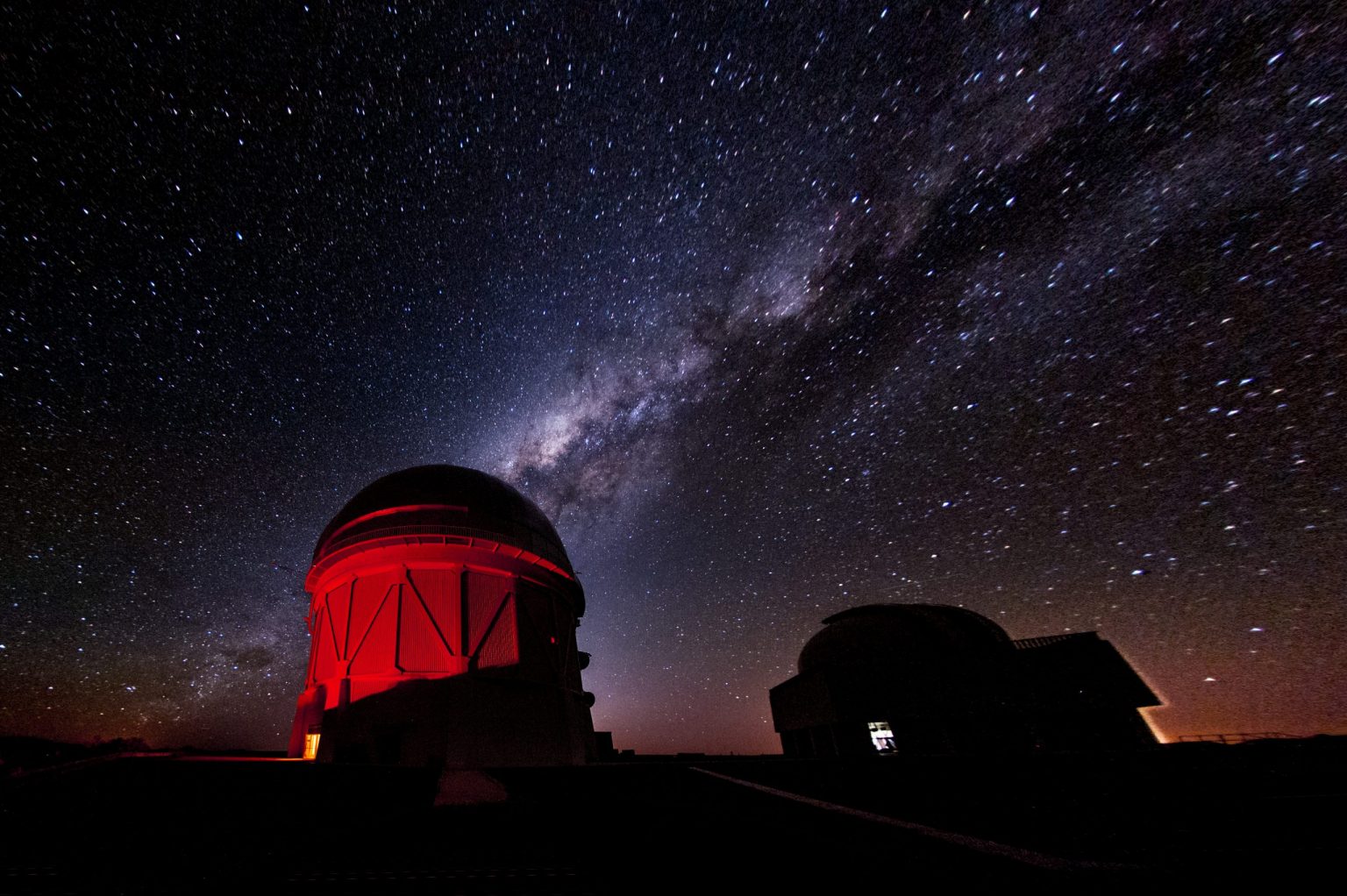 The Dark Energy Survey has imaged roughly 5,000 square degrees of southern sky. The survey has mapped hundreds of millions of galaxies to help researchers understand the accelerating expansion of our universe.

Newswise — New results from the Dark Energy Survey use the largest ever sample of galaxies over an enormous piece of the sky to produce the most precise measurements of the universe’s composition and growth to date. Scientists measured that the way matter is distributed throughout the universe is consistent with predictions in the standard cosmological model, the best current model of the universe.

Over the course of six years, DES surveyed 5,000 square degrees — almost one-eighth of the entire sky — in 758 nights of observation, cataloguing hundreds of millions of objects. The results announced today draw on data from the first three years — 226 million galaxies observed over 345 nights — to create the largest and most precise maps yet of the distribution of galaxies in the universe at relatively recent epochs.

Since DES studied nearby galaxies as well as those billions of light years away, its maps provide both a snapshot of the current large-scale structure of the universe and a movie of how that structure has evolved over the course of the past 7 billion years.

To test cosmologists’ current model of the universe, DES scientists compared their results with measurements from the European Space Agency’s orbiting Planck observatory. Planck used light signals known as the cosmic microwave background to peer back to the early universe, just 400,000 years after the Big Bang. The Planck data give a precise view of the universe 13 billion years ago, and the standard cosmological model predicts how the dark matter should evolve to the present. If DES’s observations don’t match this prediction, there is possibly an undiscovered aspect to the universe. While there have been persistent hints from DES and several previous galaxy surveys that the current universe is a few percent less clumpy than predicted — an intriguing find worthy of further investigation — the recently released results are consistent with the prediction.

“In the area of constraining what we know about the distribution and structure of matter on large scales as driven by dark matter and dark energy, DES has obtained limits that rival and complement those from the cosmic microwave background,” said Brian Yanny, a Fermilab scientist who coordinated DES data processing and management. “It’s exciting to have precise measurements of what’s out there and a better understanding of how the universe has changed from its infancy through to today.”

Ordinary matter makes up only about 5% of the universe. Dark energy, which cosmologists hypothesize drives the accelerating expansion of the universe by counteracting the force of gravity, accounts for about 70%. The last 25% is dark matter, whose gravitational influence binds galaxies together. Both dark matter and dark energy remain invisible and mysterious, but DES seeks to illuminate their natures by studying how the competition between them shapes the large-scale structure of the universe over cosmic time.

DES photographed the night sky using the 570-megapixel Dark Energy Camera on the Victor M. Blanco 4-meter Telescope at the Cerro Tololo Inter-American Observatory in Chile, a program of the National Science Foundation’s NOIRLab. One of the most powerful digital cameras in the world, the Dark Energy Camera was designed specifically for DES. It was funded by the Department of Energy (DOE) and was built and tested at Fermilab. The DES data were processed at the National Center for Supercomputing Applications at the University of Illinois at Urbana-Champaign.

“These analyses are truly state-of-the-art, requiring artificial intelligence and high-performance computing super-charged by the smartest young scientists around,” said Scott Dodelson, a physicist at Carnegie Mellon University who co-leads the DES Science Committee with Elisabeth Krause of the University of Arizona. “What an honor to be part of this team.”

To quantify the distribution of dark matter and the effect of dark energy, DES relied on two main phenomena. First, on large scales, galaxies are not distributed randomly throughout space but rather form a web-like structure due to the gravity of dark matter. DES measured how this cosmic web has evolved over the history of the universe. The galaxy clustering that forms the cosmic web, in turn, revealed regions with a higher density of dark matter.

Second, DES detected the signature of dark matter through weak gravitational lensing. As light from a distant galaxy travels through space, the gravity of both ordinary and dark matter can bend it, resulting in a distorted image of the galaxy as seen from Earth. By studying how the apparent shapes of distant galaxies are aligned with each other and with the positions of nearby galaxies along the line of sight, DES scientists inferred the spatial distribution (or clumpiness) of the dark matter in the universe.

Analyzing the massive amounts of data collected by DES was a formidable undertaking. The team began by analyzing just the first year of data, which was released in 2017. That process prepared the researchers to use more sophisticated techniques for analyzing the larger data set, which includes the largest sample of galaxies ever used to study weak gravitational lensing.

“There was significant improvement in how to calibrate the redshift distributions of the galaxy samples,” said Judit Prat, a postdoc at the University of Chicago who analyzed weak gravitational lensing as captured by DES. “This was a huge effort that people put a lot of work into. We now have a method that nobody has used before, and it’s very robust.”

Ten regions of the sky were chosen as “deep fields” that the Dark Energy Camera imaged repeatedly throughout the survey. Stacking those images together allowed the scientists to glimpse more distant galaxies. The team then used the redshift information from the deep fields to calibrate measurements of redshift in the rest of the survey region. This and other advancements in measurements and modeling, coupled with a threefold increase in data compared to the first year, enabled the team to pin down the density and clumpiness of the universe with unprecedented precision.

Along with the analysis of the weak-lensing signals, DES also precisely measures other probes that constrain the cosmological model in independent ways: galaxy clustering on larger scales (baryon acoustic oscillations), the frequency of massive clusters of galaxies, and high-precision measurements of the brightnesses and redshifts of Type Ia supernovae. These additional measurements will be combined with the current weak-lensing analysis to yield even more stringent constraints on the standard model.

The DES collaboration consists of over 400 scientists from 25 institutions in seven countries.

“The collaboration is remarkably young. It’s tilted strongly in the direction of postdocs and graduate students who are doing a huge amount of this work,” said DES Director and spokesperson Rich Kron, who is a Fermilab and University of Chicago scientist. “That’s really gratifying. A new generation of cosmologists are being trained using the Dark Energy Survey.”

DES concluded observations of the night sky in 2019. With the experience of analyzing the first half of the data, the team is now prepared to handle the complete data set. The final DES analysis is expected to paint an even more precise picture of the dark matter and dark energy in the universe. And the methods developed by the team have paved the way for future sky surveys to probe the mysteries of the cosmos.

“The real legacy of DES will be the leaps forward we’ve had to make that were essential for this key result, and which will be critical for the next generation of cosmological experiments starting soon,” said Michael Troxel, a physicist at Duke University and the key project coordinator for the DES three-year data analysis. Upcoming experiments include both space-based imaging experiments and ground-based surveys such as the Vera C. Rubin Observatory Legacy Survey of Space and Time.

“With these instruments we’ve built to stare into the dark, we are working to solve universal mysteries,” said Troxel.

The recent DES results were presented in a scientific seminar on May 27. Twenty-nine papers are available on the arXiv online repository.

Funding for the DES Projects has been provided by the U.S. Department of Energy, the U.S. National Science Foundation, the Ministry of Science and Education of Spain, the Science and Technology Facilities Council of the United Kingdom, the Higher Education Funding Council for England, the National Center for Supercomputing Applications at the University of Illinois at Urbana-Champaign, the Kavli Institute of Cosmological Physics at the University of Chicago, Funding Authority for Funding and Projects in Brazil, Carlos Chagas Filho Foundation for Research Support of the State of Rio de Janeiro, Brazilian National Council for Scientific and Technological Development and the Ministry of Science and Technology, the German Research Foundation and the collaborating institutions in the Dark Energy Survey.

Cerro Tololo Inter-American Observatory is a program of NSF’s NOIRLab, which is operated by the Association of Universities for Research in Astronomy (AURA) under a cooperative agreement with the National Science Foundation. NSF is an independent federal agency created by Congress in 1950 to promote the progress of science. NSF supports basic research and people to create knowledge that transforms the future.

NCSA at the University of Illinois at Urbana-Champaign provides supercomputing and advanced digital resources for the nation’s science enterprise. At NCSA, University of Illinois faculty, staff, students and collaborators from around the globe use advanced digital resources to address research grand challenges for the benefit of science and society. NCSA has been advancing one third of the Fortune 50® for more than 30 years by bringing industry, researchers and students together to solve grand challenges at rapid speed and scale. For more information, please visit www.ncsa.illinois.edu.