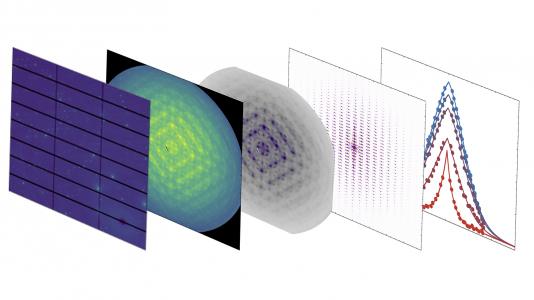 From left to right: (a) the raw data on the detector, (b) the diffuse scattering data after data reduction, (c) a machine learning-produced map showing extracted features, (d) the transform of the data, and (e) fits to the data at different temperatures. A project led by Ray Osborn (Materials Science division) will use data science to accomplish (c) and (d).

Newswise — Argonne is one of five national laboratories to receive funding for data science projects in chemical and materials sciences.

The U.S. Department of Energy (DOE) Office of Science (Basic Energy Sciences) has announced that its Argonne National Laboratory will be receiving funding for two new projects that will use data science to accelerate discovery in chemistry and material sciences.

Argonne is one of five national laboratories and fourteen universities awarded three-year grants under a DOE Funding Opportunity titled “Data Science for Discovery in Chemical and Materials Sciences.” Argonne  was awarded funding for two research projects. Total funding will be nearly $4.75 million over three years.

Lynda Soderholm, department head in the Chemical Sciences and Engineering division and Argonne Distinguished Fellow, leads one of Argonne’s new data science projects. Her collaborators include Stefan Wild and Prasanna Balaprakash from the Mathematics and Computer Science division and the Argonne Leadership Computing Facility, a DOE Office of Science User Facility, and Aurora Clark from Washington State University.

This team’s project entails a machine-learning approach to quantifying the energy drivers in chemical separations, such as liquid-liquid extraction, a common separation method. Chemical separations play a critical role in resource management by providing access to large quantities of resource-limited materials with high purity and enabling the cleanup of contaminated materials and chemicals for reuse. At present, molecular and mesoscale studies in chemical separations are limited to sampling of the reaction space by dividing the space into smaller, tractable problems. Recognizing the vastness and complexity of the reaction phase space, this project will turn to data science, machine learning and optimal design approaches to navigate the high-dimensional and interdependent features that define robust chemical separations.

This team’s research is focused on quantum materials in which the coupling of electron spins to their orbital momenta is particularly strong. Researchers have predicted that this spin-orbit coupling generates exotic forms of cooperative electron ordering not seen before. By combining synchrotron X-ray capabilities with new computational methods utilizing machine learning and advanced spectral analysis, this research will reveal the “hidden order” in quantum materials and thereby elucidate the underlying interactions that would allow them to be harnessed in future applications as diverse as quantum computing, smart sensors and actuators, and low-power electronics.

Both of these projects combine Argonne’s leadership in the chemical and materials sciences with Argonne's expertise in data science, machine learning, and statistics. Both also involve collaborations with researchers in the Mathematics and Computer Science division and the Argonne Leadership Computing Facility. Finally, both align with and support Argonne’s Materials and Chemistry Initiative, whose mission is to reveal the undiscovered rules of hierarchical assembly that can lead to new functional solids, structured liquids and complex interfaces.