From Curb to Doorstep: Driving Efficiencies for Delivering Goods

Researchers at Pacific Northwest National Laboratory are contributing artificial intelligence, machine learning, and app development expertise to a University of Washington project that will ease challenges with urban freight delivery. 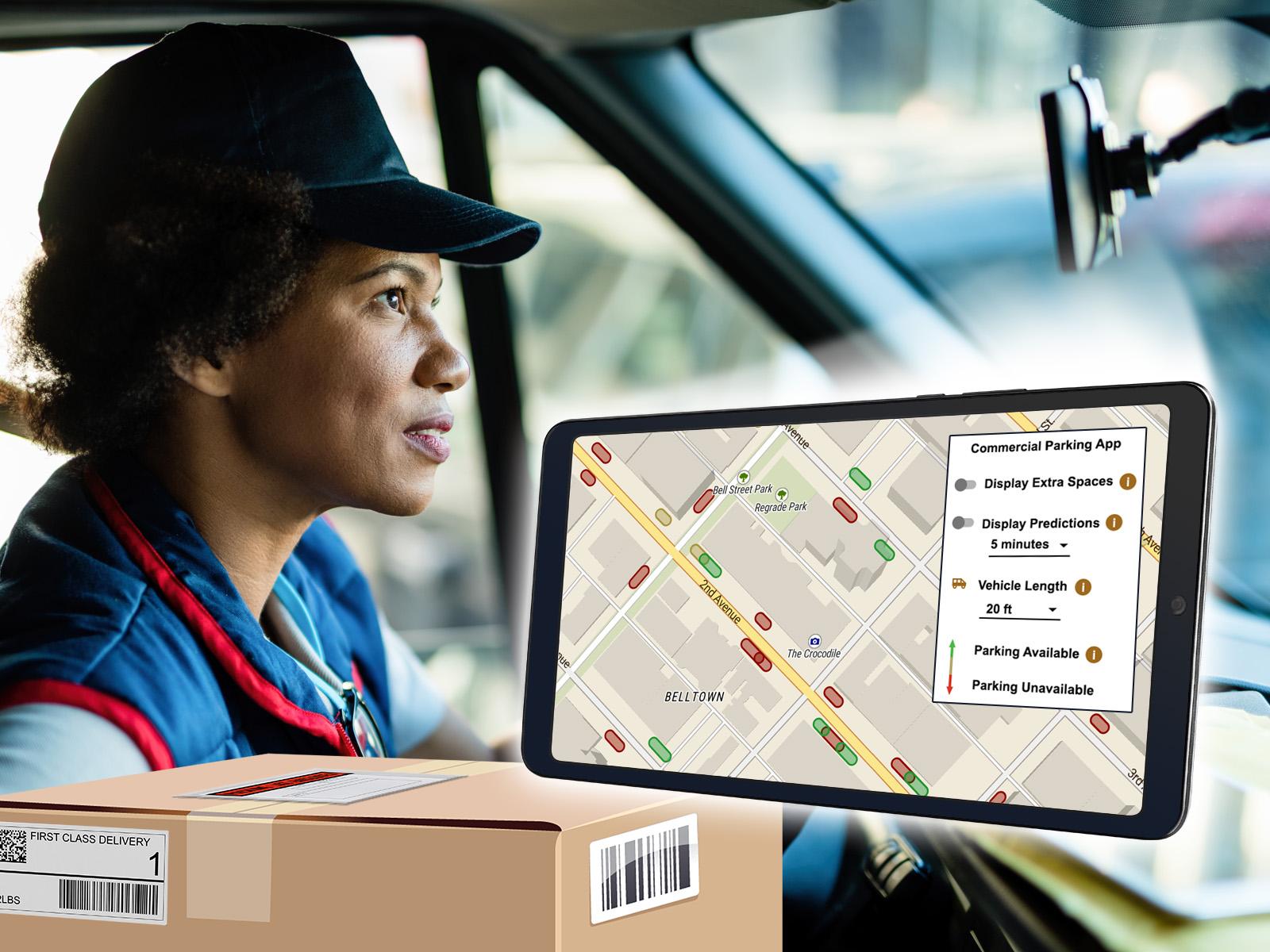 Newswise — Ten blocks of the Belltown neighborhood in downtown Seattle house an eclectic mix of retail stores, apartments, and restaurants that require daily deliveries of goods—from fresh seafood for the evening’s dinner special to the latest gadget from Amazon Prime.

In this bustling and often congested urban area, trucks fully packed with goods are on tight delivery schedules. However, circling the blocks to find an open parking zone in the “final 50 feet”—the sweet spot for the most efficient deliveries—can put drivers behind schedule.

Soon, there will be a webapp for that. In a collaboration between Pacific Northwest National Laboratory (PNNL) and the University of Washington’s Urban Freight Lab, a prototype webapp has been developed that combines smart sensors and machine learning to predict parking space availability. The prototype is ready for initial testing to help commercial delivery drivers find open spaces without expending fuel and losing time and patience.

The webapp combines curbside maps with data from nearly 300 sensors placed within 74 parking spaces in commercial and passenger loading zones from 1st to 3rd avenues and between Battery and Stewart streets.

Since late December, PNNL researchers gathered the sensors’ real-time data about parking behaviors and combined it with historical data to train the model. They analyzed the combined data and fed it to a traffic model to provide real-time visibility of parking spaces occupancy and a glance into future occupancy.

“Delivery drivers can access the webapp through web browsers on their phones and tablets,” said Amelia Bleeker, a PNNL software engineer who developed the webapp. “They can see available and unavailable parking spots depicted in green and red, respectively.”

The data updates every 10 to 15 seconds and provide a range of vehicle sizes that a space can accommodate. Spaces that are open but may not accommodate a particular vehicle size are highlighted as yellow.

Adds Vinay Amatya, a PNNL computer scientist who, along with data scientist Milan Jain, performed predictive modeling for the webapp, “Information about available parking in commercial and passenger loading zones can be obtained in both real time and prediction mode, allowing the webapp to predict which spaces will be available up to 30 minutes in the future.”

The team is testing the webapp to determine its accuracy and, when fully rolled out, will provide metrics on efficiencies and what improvements can be made.

“We can use the data to compare driver behaviors of those using the tool against those not using the webapp,” said Giacomo Dalla Chiara, a postdoctoral scholar from the Urban Freight Lab. “For example, we can assess efficiencies such as length of time for stops, time spent searching for parking, number of deliveries performed per stop, and whether the webapp is actually helping improve or change actions drivers are taking when making a delivery.”

Dalla Chiara said freight carriers have expressed enthusiasm for the webapp, but the research team also hopes to extend it to additional carriers and drivers.

“Cities can have real-time visibility into spaces that they own,” said Dalla Chiara. “With the webapp, they can tell which spaces are used most and least or not at all, so they can make determinations about the best allocations of space.”

Beyond Belltown, the team is also assessing the webapp in a location in Bellevue, Washington, just east of Seattle.

The project is supported by the U.S. Department of Energy’s Office of Energy Efficiency and Renewable Energy, Vehicle Technologies Office.

For now, PNNL and the Urban Freight Lab want to hear from commercial carriers and drivers who are interested in helping test and fine-tune the webapp. They can click here to contact Dalla Chiara.