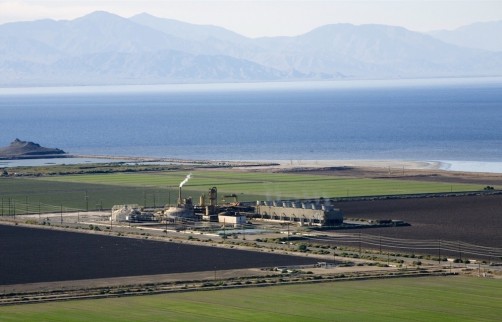 One of 10 geothermal plants operated by Berkshire Hathaway Energy’s CalEnergy at the Salton Sea. 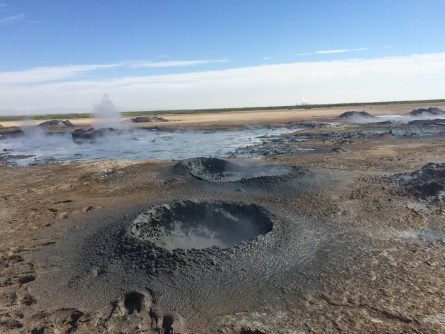 Newswise — Deep beneath the surface of the Salton Sea, a shallow lake in California’s Imperial County, sits an immense reserve of critical metals that, if unlocked, could power the state’s green economy for years to come. These naturally occurring metals are dissolved in geothermal brine, a byproduct of geothermal energy production. Now the race is on to develop technology to efficiently extract one of the most valuable metals from the brine produced by the geothermal plants near the Salton Sea: lithium.

Lithium is a key ingredient of most batteries, and as vehicles, buildings, the grid, and other sectors increasingly go electric, global demand for lithium is expected to skyrocket in coming years, growing tenfold by 2030. Scientists at the Department of Energy’s Lawrence Berkeley National Laboratory (Berkeley Lab) are working with two companies to evaluate and analyze their lithium extraction technologies. Both projects have recently been awarded grants from the California Energy Commission (CEC):

Additionally, the CEC awarded Berkeley Lab $1.7 million for a project designed to demonstrate how seismic and electromagnetic data can map geothermal reservoirs and create enhanced imaging of their structural features to better locate and place production wells. These projects will occur at The Geysers, the world's largest producing geothermal field located in Sonoma, Lake, and Mendocino counties; and the Salton Sea, the second largest geothermal field in the U.S.

Geothermal energy – a clean, renewable source of energy in which underground reservoirs of hot water are brought to the surface – provides just under 6% of California’s total electrical power generation. But the state’s geothermal potential is far greater, and the CEC is working to bring that number higher to help meet California’s clean energy goals.

“If there’s a good process for extracting lithium and other valuable minerals from geothermal fluids, that would improve the economic calculation for geothermal energy production,” said Berkeley Lab scientist Will Stringfellow, who is leading the Lab’s work on the lithium extraction projects. “At Berkeley Lab we have broad experience in geothermal systems, geochemical modeling, and characterization of the chemical reactions. For these projects we’re helping with experimental design, data collection and analysis, process validation, and technoeconomic analysis.”

The interest in critical materials extends to the federal level as well. The U.S. Department of Energy (DOE) recently announced $30 million in funding for next-generation technologies for extracting, separating, and processing rare-earth elements and other battery-critical materials used in clean energy technologies.

“The challenge is not simply lithium extraction. It’s a complex tangle of chemical, engineering, economics, and supply chain issues,” said Peter Fiske, director of Berkeley Lab’s Water-Energy Resilience Research Institute. “As a multidisciplinary national lab, we have robust research programs spanning the entire ecosystem of energy storage: from geothermal energy to lithium-ion battery technology to energy systems analysis. Our expertise is well-suited to tackle this challenge and provide national security on a critical mineral needed for energy storage, which is essential for our energy future.”

The Salton Sea Geothermal Field (SSGF) has a potential inferred lithium resource of 15 million metric tons. According to a March 2020 CEC report titled “Selective Recovery of Lithium from Geothermal Brines,” the SSGF can produce more than 600,000 tons of lithium carbonate per year; at $12,000 per ton, that’s $7.2 billion per year.

Developing additional geothermal energy sources will provide environmental benefits to the region, including reduced greenhouse gas emissions. Revenue from the land leases and mineral recovery is expected to support environmental restoration projects, which some sources estimate may cost between $3 billion and $9 billion, the report said.

No wonder many are dubbing the emerging industry as “Lithium Valley.”

While the U.S. has not been a big player in the world’s lithium market, that could change if companies can develop technologies to extract what is estimated to be an immense amount of lithium in the western U.S., including Arizona, Nevada, and California.

“California’s Lithium Valley has the potential to supply 40% of global lithium demand. The CEC is committed to supporting this emerging industry and battery supply chain,” said CEC Chair David Hochschild.

Although separating out the lithium from the brine that is brought to the surface during the geothermal production cycle sounds simple, it is anything but. For one thing, the brine contains a vast number of dissolved metals and minerals, a few of which are valuable – such as manganese and zinc – but most of which are not.

“I thought produced water was complex,” said Stringfellow, an environmental engineer who is an expert in industrial and agricultural waste waters, including produced water, which is a byproduct of oil and gas production. “Geothermal brines are a whole other level of complexity. It’s 30% solids in some cases.”

A number of companies are working on lithium extraction technologies – which often involve a pretreatment process, then the lithium separation using an inorganic absorbent, then further purification – but none have been proven on a commercial scale.

Berkshire Hathaway Energy’s CalEnergy operates 10 geothermal plants at the Salton Sea. With the CEC award, it aims to demonstrate its lithium separation technology at pilot scale, cost-effectively processing at least 100 gallons of geothermal brine per minute and then converting the lithium to battery-grade lithium carbonate. The company’s goal is for existing geothermal power plants to reduce the cost of power production by as much as 35% by producing and selling lithium compounds.

“Successful lithium production from geothermal brine will bring another source of revenue to these geothermal plants and could become the catalyst to revive Imperial Valley’s decades-old geothermal power industry, not just creating new jobs but also making the price of baseload geothermal power much more cost-effective for the benefit of Californian ratepayers,” said Jonathan Weisgall, Berkshire Hathaway Energy’s vice president for government relations, at the CEC’s May 20 business meeting to approve the grant.

Controlled Thermal Resources (CTR), a company based in the Imperial Valley, has developed a pretreatment process to selectively remove base metals from the brine before the lithium is extracted. The lithium extraction will then be conducted using an ion-exchange resin technology from Lilac Solutions. CTR aims to demonstrate that it can produce battery-grade lithium carbonate at a production cost of less than $5,000 per metric ton.

“CTR and our project engineering consultants at Hatch have completed extensive test work and design work to demonstrate that direct lithium extraction from Salton Sea geothermal brine is competitive on a worldwide basis,” CTR’s Chief Executive Officer Rod Colwell said. “The opportunity to develop lithium extraction and conversion facilities that complement the latest advancements in geothermal power plant engineering will enable our team to design and construct commercial facilities that offer superior operating and economic outcomes. We look forward to working with the Berkeley Lab team as we prepare for this next evolution in renewable energy and critical minerals production in the United States.”

Berkeley Lab scientists led by Stringfellow and Hanna Breunig will be involved in both projects to make sure the appropriate data is collected and analyzed to help the CEC evaluate the technologies.

Currently, the vast majority of the world’s lithium is mined in Argentina, Chile, China, and Australia. The dominant method is solar evaporation of brines found in underground brine reservoirs below the surface of dried lake beds. While processing costs are low, this technique has a number of disadvantages: The process is slow (taking up to 24 months), weather-dependent, and has an extraction efficiency of only 50%.

Part of Berkeley Lab’s work involves doing a technoeconomic analysis, in which it will collaborate with UC Riverside. Although a lithium extraction technology may have been demonstrated in the lab, showing that it can run economically at a large geothermal facility remains to be proven.

“Ultimately the CEC wants to see benefits to ratepayers,” said Breunig, who is leading the technoeconomic work. “It can’t just be about producing lithium for cars; it has to benefit the electricity grid and ratepayers. Our scope is going to be very focused on demonstrating whether there’s a system efficiency that can be achieved that makes us competitive against other forms of lithium production.”

For the CEC project taking place at The Geysers, Berkeley Lab scientists David Alumbaugh and Michael Commer will be partnering with colleagues at the United States Geological Survey (USGS) and companies Array Information Technology and Jarpe Data Solutions to develop and test a novel geophysical imaging technology. The imaging technique employs a combination of seismic and electromagnetic signals to generate high-resolution images of the subsurface that delineate steam- versus fluid-filled regions of the reservoir. This will allow Calpine, the company that operates most of the geothermal plants at The Geysers, to improve its reservoir models.

“The more accurate it is, the better they can control the injection of water and the production of steam to optimize their energy production,” said Alumbaugh. “That saves money for them and for ratepayers.”

If the technique can be demonstrated, it can be applied at any geothermal field that produces steam, Alumbaugh said. It could also help in placing new production wells; one of the obstacles to expanding geothermal energy is the high upfront costs of drilling a new well.

Nearly half of California’s known geothermal resources still remain untapped, according to the CEC. With these projects, it hopes to make geothermal energy more economically attractive, thus leading to higher penetration of renewable energy in California and making the grid more stable and reliable.

The grants were funded through the CEC’s Electric Program Investment Charge (EPIC) program, which focuses on clean energy innovation and entrepreneurship. 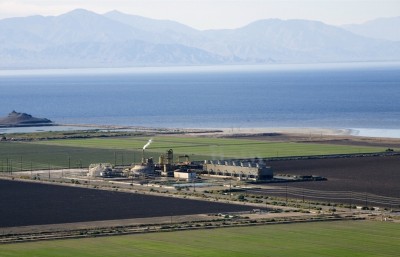 Caption: One of 10 geothermal plants operated by Berkshire Hathaway Energy’s CalEnergy at the Salton Sea. 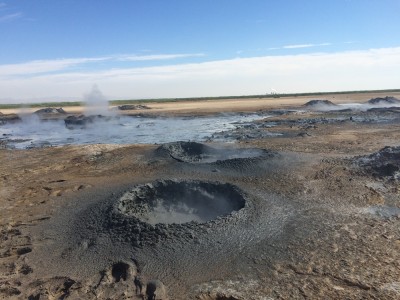