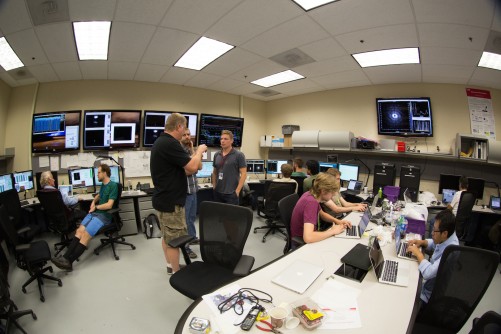 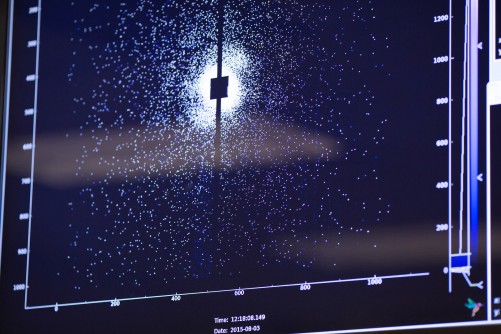 A monitor in a control room at SLAC's Linac Coherent Light Source X-ray laser displays an image produced by an X-ray pulse hitting a tiny virus sample. This experiment was conducted by a global scientific team, launched by SLAC, to push X-ray imaging of active biological samples to new limits. 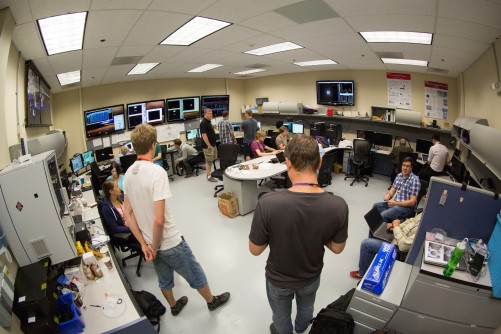 Researchers gather in the Atomic, Molecular and Optical Science control room at the Linac Coherent Light Source (LCLS) X-ray laser to participate in a Single Particle Imaging experiment. LCLS scientist Andy Aquila (at right, in blue and white shirt) is heading up this effort.

Using a technique known as Single Particle Imaging (SPI), the new venture is an uncommon collaboration of more than 100 scientists from 21 research centers in eight countries who are working toward this ambitious goal at SLAC’s X-ray laser, the Linac Coherent Light Source (LCLS), a DOE Office of Science User Facility.

Single particle imaging refers to an X-ray technique that takes a snapshot of one tiny sample at a time, such as an individual virus, bacterium or nanoscale crystal. In previous experiments at LCLS, researchers have compiled X-ray images of hundreds or thousands of these samples, including giant viruses, living cyanobacteria and cell components, to produce composite 2-D and 3-D images. This has resulted in a set of high-profile scientific papers, but still falls short of what the scientific community hopes to achieve with X-ray lasers.

To speed progress, an international SPI team was launched in December 2014 to pool expertise and pursue common goals. The team just completed the first suite of experimental tests using LCLS. The data they obtained are now being analyzed, but already show important progress toward the ultimate goal of making images with atomic detail using LCLS pulses. The ability to produce 3-D images from multiple samples, along with individual 2-D images that reveal subtle differences between samples, would allow scientists to understand biological processes in systems that are challenging to study with more conventional techniques, such as crystallography or electron microscopy.

“This is truly a grand challenge, identified as one of the original motivating goals for X-ray free electron lasers,” said LCLS Director Mike Dunne. “Success is by no means assured, but our progress is highly encouraging and the impact of achieving atomic resolution would be truly profound.”

This goal, outlined in a “road map” published this year, presents a host of challenges. Biological samples don’t face the camera to have their portraits taken; instead they tumble randomly as they are jetted into the path of the X-ray pulses. Also, an X-ray pulse can strike multiple samples at once or hit just part of a sample, and the properties of the X-ray beam itself vary from pulse to pulse.

“We are pushing the tools and methods to see how far we can take this,” said Andy Aquila, an LCLS staff scientist who is leading the effort. “We are working on the fundamentals.”

Using an X-ray laser opens up new possibilities for looking inside intact biological objects and capturing the details of ultrafast biological processes, because its intense, ultrashort pulses produce vivid, living portraits in the instant before they destroy the sample.

Other techniques have achieved higher resolution, but they typically require samples to be frozen, sliced up or otherwise altered. LCLS has the advantage of studying samples in a more natural, intact state at room temperature. It also works quickly, rapidly moving samples through the X-ray beam, which fires up to 120 X-ray pulses per second, and hitting them one at a time.

"Ultimately, we'd like to get snapshots as these bioparticles change in response to their chemical environment," said John Spence, science director for a National Science Foundation-funded consortium of U.S. universities using the LCLS for biology.

In a series of dedicated experiments at LCLS, the team is taking a step-by-step approach to figuring out the best way to tune the laser pulses and configure related equipment to improve the X-ray focus and produce sharper, more detailed images of samples.

Large collaborations are common at LCLS, but it’s rarer for separate groups of researchers to band together in this way toward a common goal. Aquila said, “Virtually every player in the field is a part of this. It’s great to have such a broad cross-section of the community. We are not competing – the group develops a consensus. Everyone wants this to work.”

Latest ResultsEarlier this month, during the team’s third and latest LCLS round of experiments, the control room was abuzz with conversation as groups of researchers monitored the performance of the X-ray beam and detectors, the real-time data analysis software and other systems in preparation for delivering test samples to the X-ray pulses.

Participants had voted to use the outer hull, or “capsid,” of the well-studied rice dwarf virus, which measures about 80 nanometers (billionths of a meter) in diameter, as the first test sample. A whiteboard displayed a checklist of technical specs to run through during this 12-hour shift.

“There was a lot of effort put into making a nice, clean X-ray beam,” Aquila said, accomplished by running the beam through a series of narrow slits to shape the pulses to sharpen their focus and avoid stray “noise” on the X-ray detectors. “Subtle things can change the experiment quite dramatically.”

Aquila said early analysis of the new imaging results showed resolution down to several nanometers, complementing data from a previous test that displayed sub-nanometer information. Both results represent major improvements that mark significant progress toward the ultimate goal of atomic-scale imaging. “We have a lot more work ahead of us, but I think it’s achievable,” Aquila said.

While participating scientists sometimes compete to be the first to release scientific results, the current approach seeks to level the playing field by establishing and sharing the best methods for conducting experiments. All the data gathered will be made available to all participants and then to the entire scientific community.

“We want to be as open as possible,” Aquila said. “We want to improve the methods to provide new capabilities that can then be utilized by everyone.”

Participants said they are eager to put what they learn into practice at the handful of other X-ray lasers in operation or under construction around the globe.

“You can’t build a race car until you put the wheels on, and this systematic approach to the science is putting the wheels on,” said Adrian Mancuso, who is leading the development of an instrument that will perform related experiments at the European X-ray Free-Electron Laser (European XFEL) now under construction in Germany. “This effort is parallel to our work at the European XFEL. It is intrinsically important for the success of future experiments.”

Henry Chapman, a division leader at the Center for Free-Electron Laser Science in Germany, said, “I think progress from here will be rapid and exciting. This type of imaging has always been a big challenge, and that’s why it has been so good for the community to come together to work on this.”

The lessons learned from the first year of coordinated experiments will be discussed at an Oct. 9 workshop at SLAC, along with future priorities to maintain the pace of progress. 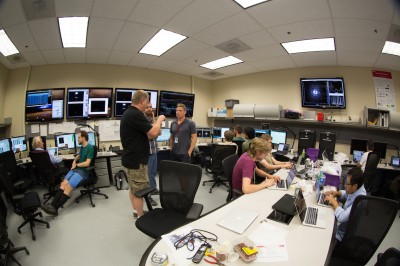 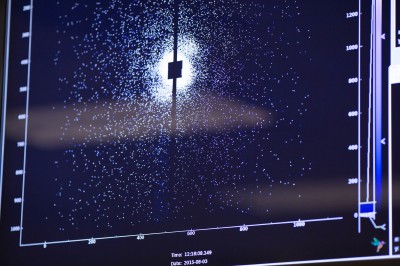 Caption: A monitor in a control room at SLAC's Linac Coherent Light Source X-ray laser displays an image produced by an X-ray pulse hitting a tiny virus sample. This experiment was conducted by a global scientific team, launched by SLAC, to push X-ray imaging of active biological samples to new limits. 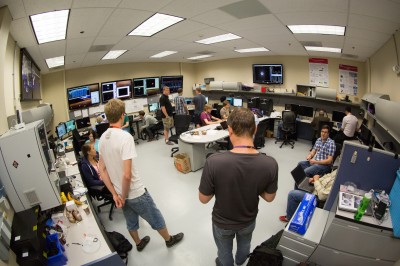 Caption: Researchers gather in the Atomic, Molecular and Optical Science control room at the Linac Coherent Light Source (LCLS) X-ray laser to participate in a Single Particle Imaging experiment. LCLS scientist Andy Aquila (at right, in blue and white shirt) is heading up this effort.