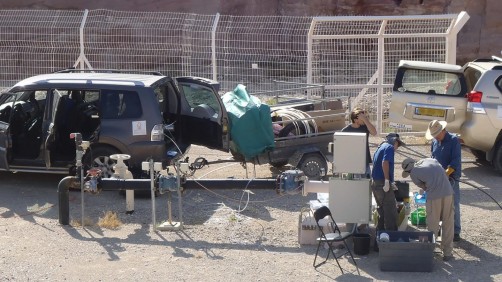 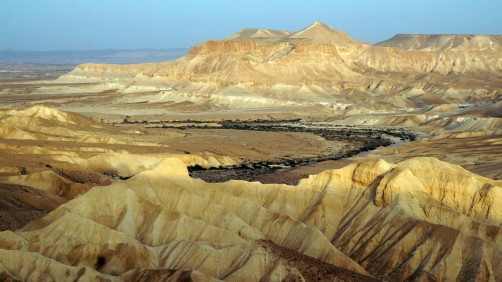 Zheng-Tian Lu, University of Science and Technology of China

The Negev Desert, Israel, where researchers from Argonne and the University of Chicago used the radioisotope krypton-81 to identify two distinct source contributions to the water in the Nubian Sandstone Aquifer.

Newswise — Getting reliable precipitation data from the past has proven difficult, as is predicting regional changes for climate models in the present. A combination of isotope techniques developed by researchers at Argonne and UChicago may help resolve both.

The Negev desert, which covers half of Israel’s land mass, is so dry that parts of it get less than three inches of water a year. So dry, its climatological term is “hyperarid.” But like most places on Earth, the region evolved to its present condition after eons of changes in climate and geology.

Today, despite its parched exterior, there is still water under the Negev. Understanding where it came from, how much is there, and what’s happening to it is critical to the security and allocation of that crucial resource.

Researchers at Ben-Gurion University of the Negev in Israel are collaborating with colleagues at the U.S. Department of Energy’s Argonne National Laboratory and the University of Chicago to better understand the Nubian Sandstone Aquifer system, which lies beneath a large portion of the Negev and other parts of Israel.

“To our knowledge, this was the first time that groundwater could directly be used as a climate archive on these long timescales.” — Jake Zappala, postdoctoral appointee, TRACER Center

By combining Argonne’s pioneering radiokrypton dating technique with other isotopic fingerprints of the water’s composition, the researchers are not only able to tell when that water was deposited, but where it came from and the climate conditions that produced it nearly 400,000 years ago. The result marks the first time that scientists have been able to use groundwater to build a picture of ancient hydro-climates dating back that far.

An article describing the research, “Radiokrypton unveils dual moisture sources of a deep desert aquifer,” was published July 29, in Proceedings of the National Academy of Sciences (PNAS) online.

“The aquifers beneath the Negev don’t get replenished today, so apparently there were times when there was much more rain in the region that collected underground,” says Peter Mueller, principal physicist at Argonne’s Trace Radioisotope Analysis Center (TRACER).

To determine when and how that might have occurred, the team collected water from more than 20 wells in the area, then separated out the krypton gas and analyzed it using a technology called Atom Trap Trace Analysis (ATTA), a technique first developed at Argonne to support nuclear physics measurements.

ATTA measures water for traces of the rare krypton (Kr) isotope 81Kr, which can date water within a range of approximately 40,000 to 1.5 million years old. This boosts it well beyond the range of radiocarbon dating, which cannot reach accurately beyond about 40,000 years.

The ATTA analysis suggested that the water in the wells accumulated by means of two major “recharging” events that occurred less than 40,000 and near 360,000 years ago. Both periods coincided with generally cooler climates. These “regional humid periods” were ripe for the development of storms that could provide rainfall adequate to replenish the Negev aquifers.

While the 81Kr usually provides an excellent window into the time frame, the distribution data was unexpectedly complex and puzzling. But it showed interesting covariation with deuterium, an isotope of hydrogen heavier than that found in “regular” water.

“We were looking for the delta deuterium, which is a measure of the difference in the ratio of heavy hydrogen to regular hydrogen,” says Jake Zappala, postdoctoral appointee at the TRACER Center. “That number is going to vary for different bodies of water depending on where the water came from and what the weather conditions were, which is important.”

Because deuterium has a heavier mass than hydrogen, it behaves differently, evaporating and condensing at different temperatures. For example, when evaporation happens quickly, as over the Mediterranean Sea, it exhibits a peculiar signature compared to global precipitation trends. Even though it is very rare relative to hydrogen — only one in ten thousand water molecules contains one deuterium atom instead of hydrogen — it can be measured very precisely.

Thus scientists can “fingerprint” such bodies of water based on the particular signature of its stable isotopes. Every climate pattern places its own imprint in that signature, according to the researchers.

“This project shows us these tools could be really transformative, tracing water movement much further than we’ve previously been able to,” said Reika Yokochi, research associate professor in the Department of Geophysical Sciences at the University of Chicago, and the first author of the new study.

Yokochi, who has been collaborating with the ATTA team since 2012, has been key in developing some of the extraction techniques the team currently uses. She hit upon the idea of combining the two data sets to find a correlation between the 81Kr and the deuterium data.

From the covariation and the spatial distribution of the data, the team determined that water from the two recharge events came from two distinct sources. About 400,000 years ago, the region was cooler than the present, and moisture is believed to have been delivered from the Atlantic Ocean in the form of tropical plumes. The more recent recharge, less than 40,000 years ago, may have been the result of Mediterranean cyclones during the most recent major glacial event, or Last Glacial Maximum.

“To our knowledge, this was the first time that groundwater could directly be used as a climate archive on these long timescales,” says Zappala. “Using the radiokrypton dating, we are able to say when it rained, and the heavy-to-light water ratio directly tells us something about the weather pattern. So we have a direct correlation between time and regional weather patterns.”

Another interesting point is that the water came from near an earthquake fault zone, notes Yokochi, suggesting that faults can serve as a “wall” that preserves relatively fresh water over hundreds of thousands of years.

“It’s possible that similar water repositories may exist along other fault zones all over the world,” she says.

To date, getting reliable precipitation data from the past has proven difficult, as is predicting regional changes for climate models in the present. The combination of isotope tools used by the team may be part of the answer to resolving both.

As the tools continue to deliver a more reliable picture of past climate events, like the regional water cycles of the Negev, the researchers believe that this data can serve to calibrate present-day models of similar climate phenomena.

“Does your climate model predict the right precipitation pattern 400,000 years ago?” asks Mueller. “Using our data, modelers can calculate back in time to see if their model is right. That is one of the key things that we can provide.” 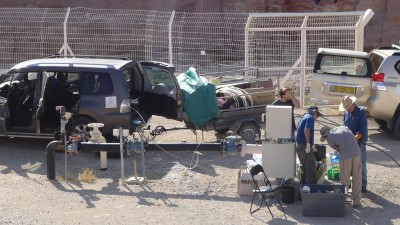 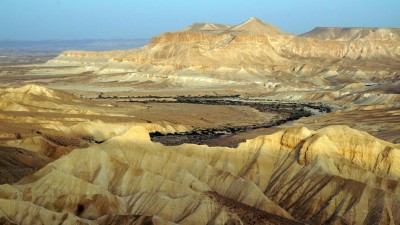 Credit: Zheng-Tian Lu, University of Science and Technology of China

Caption: The Negev Desert, Israel, where researchers from Argonne and the University of Chicago used the radioisotope krypton-81 to identify two distinct source contributions to the water in the Nubian Sandstone Aquifer.