This video captures the aerodynamic levitation process for studying refractory oxides at the APS. Small beads of material (2-3 mm in diameter) are levitated and heated by a laser to determine what happens to them at their melting points. 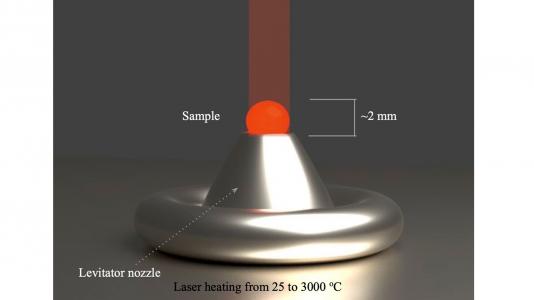 Illustration of the aerodynamic levitation process for studying refractory oxides at their melting points at the APS. A small bead of material is buoyed by gas and heated up by an overhead laser before X-rays examine its structure.

Newswise — Argonne scientists across several disciplines have combined forces to create a new process for testing and predicting the effects of high temperatures on refractory oxides.

Cast iron melts at around 1,200 degrees Celsius. Stainless steel melts at around 1,520 degrees Celsius. If you want to shape these materials into everyday objects, like the skillet in your kitchen or the surgical tools used by doctors, it stands to reason that you would need to create furnaces and molds out of something that can withstand even these extreme temperatures.

That’s where refractory oxides come in. These ceramic materials can stand up to blistering heat and retain their shape, which makes them useful for all kinds of things, from kilns and nuclear reactors to the heat-shielding tiles on spacecraft. But considering the often-dangerous environments in which these materials are used, scientists want to understand as much as they can about what happens to them at high temperatures, before components built from those materials encounter those temperatures in the real world.

“I’m not saying humans aren’t great, but if we get help from computers and software, we can be greater. It opens the door for more experiments like this that advance science.” — Marius Stan, program lead, Intelligent Materials Design, Argonne

A team of researchers from the U.S. Department of Energy’s (DOE) Argonne National Laboratory has come up with a way to do just that. Using innovative experimental techniques and a new approach to computer simulations, the group has devised a method of not only obtaining precise data about the structural changes these materials undergo near their melting points, but more accurately predicting other changes that can’t currently be measured.

The team’s work has been published in Physical Review Letters.

The seed of this collaboration was planted by Marius Stan, leader of the Intelligent Materials Design program in Argonne’s Applied Materials division. Stan’s group had developed plenty of models and simulations about the melting points of refractory oxides, but he wanted to test them out.

“It’s rooted in the desire to see if our mathematical models and simulations represent reality or not,” Stan said. ​“But it has evolved into a study of machine learning. What I find most exciting is that there is now a way for us to predict interactions between atoms automatically.”

That innovation began by flipping a familiar script, according to Ganesh Sivaraman, lead author on the paper and an assistant computational scientist with the Data Science and Learning division at Argonne. He performed this work while he was a postdoctoral appointee at the Argonne Leadership Computing Facility (ALCF), a DOE Office of Science User Facility.

While most experiments begin with a theoretical model — basically, an informed and educated guess at what will happen under real-life conditions — the team wanted to start this one with experimental data and design their models around that.

Sivaraman tells a story about a famous German mathematician who wanted to learn how to swim, so he picked up a book and read about it. Creating theories without considering the experimental data, Sivaraman said, is like reading a book about swimming without ever getting into a pool. And the Argonne team wanted to jump in at the deep end.

“It’s more accurate to build a model around experimental data,” Sivaraman said. ​“It brings the model closer to reality.”

To obtain that data, the computational scientists partnered up with physicist Chris Benmore and assistant physicist Leighanne Gallington of Argonne’s X-ray Science Division. Benmore and Gallington work at the Advanced Photon Source (APS), a DOE Office of Science User Facility at Argonne, which generates very bright X-ray beams to illuminate the structures of materials, among other things. The beamline they used for this experiment allows them to examine the local and long-range structure of materials at extreme conditions, such as high temperatures.

Of course, heating up refractory oxides — in this case, hafnium dioxide, which melts at around 2,870 degrees Celsius — comes with its own complications. Ordinarily, the sample would be in a container, but there isn’t one available that would withstand those temperatures and still allow the X-rays to pass through them. And you can’t even rest the sample on a table, because the table will melt before the sample does.

The solution is called aerodynamic levitation and involves scientists using gas to suspend a small (2-3 mm in diameter) spherical sample of material about a millimeter in the air.

“We have a nozzle connected to a flow of inert gas, and as it suspends the sample, a 400-watt laser heats the material from above,” Gallington said. ​“You need to tinker with the gas flow to get it to levitate stably. You don’t want it too low, because the sample will touch the nozzle, and might melt to it.”

Once the data were taken and beamline scientists had a good understanding of some of what happens when hafnium oxide melts, the computer scientists took the ball and ran with it. Sivaraman fed the data into two sets of machine learning algorithms, one of them that understands the theory and can make predictions, and another — an active learning algorithm — that acts as a teaching assistant, only giving the first one the most interesting data to work with.

“Active learning helps other kinds of machine learning to learn with fewer data,” Sivaraman explained. ​“Say you want to walk from your house to the market. There may be many ways to get there, but you only need to know the shortest path. Active learning will point out the shortest way and filter out the others.”

Computations were run on supercomputers at the ALCF and the Laboratory Computing Resource Center at Argonne. What the team ended up with is a computer-generated model based on real-life data, one that allows them to predict things the experimentalists didn’t — or couldn’t — capture.

“We have what is called a multi-phase potential, and it can predict a lot of things,” Benmore said. ​“We can now go ahead and give you other parameters, such as how well it retains its shape at high temperatures, which we did not measure. We can extrapolate what would happen if we go beyond the temperature we can reach.”

“The model is only as good as the data you give it, and the more you give it the better it becomes,” Benmore added. ​“We give as much information as we can, and the model becomes better.”

Sivaraman describes this work as a proof of concept, one that can feed back into further experiments. It’s a nice example, he said, of collaboration between different parts of Argonne, and of research that could not be done without the resources of a national laboratory.

“We will repeat this experiment on other materials,” Sivaraman said. ​“Our APS colleagues have the infrastructure to study how these materials melt at extreme conditions, and we are working with computer scientists to build the software and streaming infrastructure to rapidly process these datasets at scale. We can incorporate active learning into the framework and teach models to more efficiently process the data stream using ALCF supercomputers.”

For Stan, the proof of concept is one that may replace the necessary tedium of people working out these precise calculations. He has watched this technology evolve during his career, and now what once took months only takes a few days.

“I’m not saying humans aren’t great,” he chuckled, ​“but if we get help from computers and software, we can be greater. It opens the door for more experiments like this that advance science.”