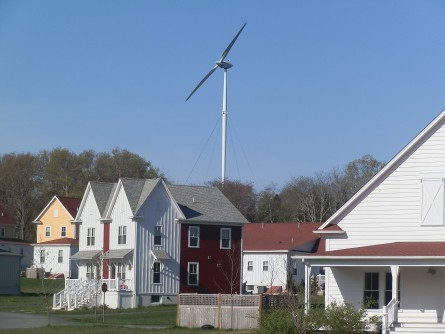 Photo courtesy of Vergnet, via NREL (Photo available for download at http://images.nrel.gov/viewphoto.php?imageId=7209341.)

A new report indicates more people are installing distributed wind turbines, such as this 275-kilowatt turbine that directly provides power for a community in Rhode island.

Newswise — RICHLAND, Wash. – Americans are increasingly installing wind turbines near their homes, farms and businesses to generate their own energy, concludes a new report released today.

The 2012 Market Report on Wind Technologies in Distributed Applications is the first comprehensive analysis on a growing field called distributed wind, which involves generating wind energy close to where it will be used instead of purchasing power from large, centralized wind farms. Distributed wind can range from a small, solitary turbine in someone’s backyard to several large turbines that power a manufacturing facility or a neighborhood.

“The public often pictures large wind projects with long rows of turbines when they think of wind power,” said the report’s lead author Alice Orrell, an energy analyst at the Department of Energy’s Pacific Northwest National Laboratory. “But this report provides detailed data that shows this image is incomplete. Many of the nation’s turbines are for distributed, not centralized, wind projects.”

More information can be found in the full report and in DOE's news release.

Interdisciplinary teams at Pacific Northwest National Laboratory address many of America's most pressing issues in energy, the environment and national security through advances in basic and applied science. Founded in 1965, PNNL employs 4,400 staff and has an annual budget of more than $1 billion. It is managed by Battelle for the U.S. Department of Energy. For more information, visit the PNNL News Center, or follow PNNL on Facebook, Google+, LinkedIn and Twitter.