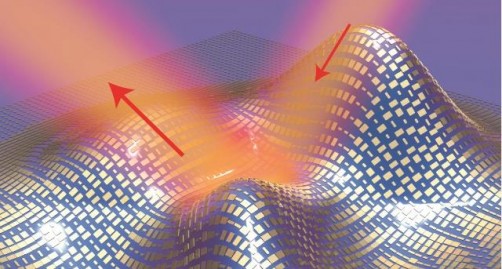 A 3D illustration of a metasurface skin cloak made from an ultrathin layer of nanoantennas (gold blocks) covering an arbitrarily shaped object. Light reflects off the cloak (red arrows) as if it were reflecting off a flat mirror. 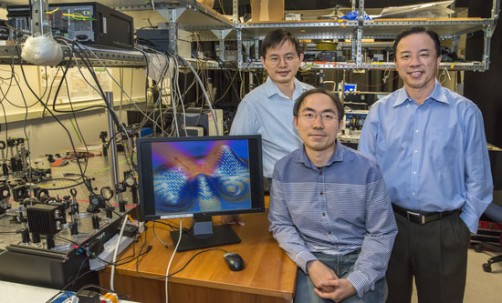 (From left) Yuan Wang, Zi Jing Wong and Xiang Zhang have devised an ultra-thin invisibility “skin” cloak that can conform to the shape of an object and conceal it from detection with visible light.

Newswise — Invisibility cloaks are a staple of science fiction and fantasy, from Star Trek to Harry Potter, but don’t exist in real life, or do they? Scientists at the U.S. Department of Energy (DOE)’s Lawrence Berkeley National Laboratory (Berkeley Lab) and the University of California (UC) Berkeley have devised an ultra-thin invisibility “skin” cloak that can conform to the shape of an object and conceal it from detection with visible light. Although this cloak is only microscopic in size, the principles behind the technology should enable it to be scaled-up to conceal macroscopic items as well.

Working with brick-like blocks of gold nanoantennas, the Berkeley researchers fashioned a “skin cloak” barely 80 nanometers in thickness, that was wrapped around a three-dimensional object about the size of a few biological cells and arbitrarily shaped with multiple bumps and dents. The surface of the skin cloak was meta-engineered to reroute reflected light waves so that the object was rendered invisible to optical detection when the cloak is activated.

“This is the first time a 3D object of arbitrary shape has been cloaked from visible light,” said Xiang Zhang, director of Berkeley Lab’s Materials Sciences Division and a world authority on metamaterials - artificial nanostructures engineered with electromagnetic properties not found in nature. “Our ultra-thin cloak now looks like a coat. It is easy to design and implement, and is potentially scalable for hiding macroscopic objects.”

Zhang, who holds the Ernest S. Kuh Endowed Chair at UC Berkeley and is a member of the Kavli Energy NanoSciences Institute at Berkeley (Kavli ENSI), is the corresponding author of a paper describing this research in Science. The paper is titled “An Ultra-Thin Invisibility Skin Cloak for Visible Light.” Xingjie Ni and Zi Jing Wong are the lead authors. Other co-authors are Michael Mrejen and Yuan Wang.

It is the scattering of light – be it visible, infrared, X-ray, etc., - from its interaction with matter that enables us to detect and observe objects. The rules that govern these interactions in natural materials can be circumvented in metamaterials whose optical properties arise from their physical structure rather than their chemical composition. For the past ten years, Zhang and his research group have been pushing the boundaries of how light interacts with metamaterials, managing to curve the path of light or bend it backwards, phenomena not seen in natural materials, and to render objects optically undetectable. In the past, their metamaterial-based optical carpet cloaks were bulky and hard to scale-up, and entailed a phase difference between the cloaked region and the surrounding background that made the cloak itself detectable – though what it concealed was not.

“Creating a carpet cloak that works in air was so difficult we had to embed it in a dielectric prism that introduced an additional phase in the reflected light, which made the cloak visible by phase-sensitive detection,” says co-lead author Xingjie Ni, a recent member of Zhang’s research group who is now an assistant professor at Penn State University. “Recent developments in metasurfaces, however, allow us to manipulate the phase of a propagating wave directly through the use of subwavelength-sized elements that locally tailor the electromagnetic response at the nanoscale, a response that is accompanied by dramatic light confinement.”

In the Berkeley study, when red light struck an arbitrarily shaped 3D sample object measuring approximately 1,300 square microns in area that was conformally wrapped in the gold nanoantenna skin cloak, the light reflected off the surface of the skin cloak was identical to light reflected off a flat mirror, making the object underneath it invisible even by phase-sensitive detection. The cloak can be turned “on” or “off” simply by switching the polarization of the nanoantennas.

“A phase shift provided by each individual nanoantenna fully restores both the wavefront and the phase of the scattered light so that the object remains perfectly hidden,” says co-lead author Zi Jing Wong, also a member of Zhang’s research group.

The ability to manipulate the interactions between light and metamaterials offers tantalizing future prospects for technologies such as high resolution optical microscopes and superfast optical computers. Invisibility skin cloaks on the microscopic scale might prove valuable for hiding the detailed layout of microelectronic components or for security encryption purposes. At the macroscale, among other applications, invisibility cloaks could prove useful for 3D displays.

DOE’s Office of Science is the single largest supporter of basic research in the physical sciences in the United States, and is working to address some of the most pressing challenges of our time. For more information, please visit the Office of Science website at www.science.energy.gov/. 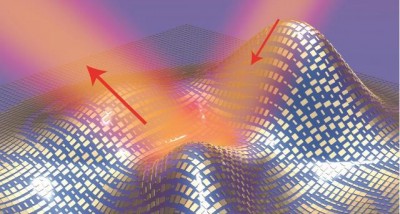 Caption: A 3D illustration of a metasurface skin cloak made from an ultrathin layer of nanoantennas (gold blocks) covering an arbitrarily shaped object. Light reflects off the cloak (red arrows) as if it were reflecting off a flat mirror. 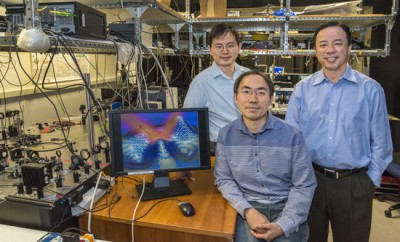 Caption: (From left) Yuan Wang, Zi Jing Wong and Xiang Zhang have devised an ultra-thin invisibility “skin” cloak that can conform to the shape of an object and conceal it from detection with visible light.