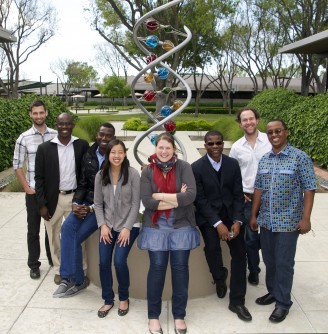 The leaves of a healthy cassava plant (left) are compared against leaves infected with cassava mosaic disease (right). The images complement a cassava genetics paper led by UC Berkeley and DOE JGI researchers that was published ahead online April 18, 2016 in Nature Biotechnology.

Newswise — For nearly a billion people around the world, cassava is a staple crop and a primary source of calories. The plant is easy to cultivate – cuttings grow well on marginal land—and it is very tolerant of drought. For the U.S. Department of Energy, these traits and its starchy qualities make cassava of interest as a potential feedstock for biofuel production.

Though cassava is easy to cultivate, it is particularly vulnerable to plant pathogens, which can significantly reduce crop yields. To help improve breeding strategies for this root crop, a team led by researchers from University of California, Berkeley and including researchers from the DOE Joint Genome Institute (JGI), a DOE Office of Science User Facility, have described cassava’s genetic diversity in the April 18, 2016 advanced online publication of the journal Nature Biotechnology. As cassava roots contain 20-40% starch that costs 15-30% less to produce per hectare than starch from corn, in many parts of the world, particularly Africa and Southeast Asia, it represents a strategic source of renewable energy—biomass from which ethanol is being produced for transportation fuels. With the help of genomics, researchers hope to apply advanced breeding strategies that can improve cassava’s resistance to diseases and improve crop yields.

The cassava genome was initially sequenced under the aegis of the DOE JGI Community Science Program and Roche 454 Life Sciences. Since the draft sequence was released in 2009, researchers have improved it with additional data in order to develop a chromosome-scale sequence, in part in order to apply the information toward improved breeding strategies.

In the paper, the team, which included UC Berkeley specialist Jessen Bredeson and postdoctoral scholar Jessica Lyons and DOE JGI’s Simon Prochnik and Albert Wu, compared the cassava reference genome to the genomes of relatives castor bean (Ricinis communis), rubber tree (Hevea brasiliensis), Ceara rubber (Manihot glaziovii), and 53 cultivated and wild cassava varieties from around the world. They found that the genetic diversity of cassava used in current breeding efforts has been greatly reduced in Africa, where viruses such as the cassava mosaic disease and the cassava brown streak disease have affected crop yields in many nations. They were able to detect the genetic signature of past cassava improvement programs going back to the 1930’s, which interbred cassava and Ceara rubber, and the persistence of these Ceara rubber regions in elite cassava varieties suggests they confer desirable traits. They also elucidated relatedness between many cultivated cassava varieties, which can help breeders maximize genetic diversity in improvement programs.

“The variants and population structure described here are essential inputs for marker-assisted and genome selection-based approaches to improving disease resistance and yield for this staple crop,” the team noted.

The cassava genome is available on the DOE JGI Plant Portal Phytozome at http://phytozome.jgi.doe.gov/.

Steve Rounsley of Dow AgroSciences spoke about cassava genomics at the DOE JGI’s 2014 Genomics of Energy and Environment Meeting. Watch the video at http://bit.ly/JGI14UMRounsley. Co-author Chiedozie Egisi, formerly of Nigeria’s National Root Crops Research Institute and now the project manager for the Next Generation Cassava Breeding program (NEXTGEN Cassava) at Cornell University, recently spoke about cassava breeding at the 2016 American Association for the Advancement of Science (AAAS) Annual Meeting. Watch his talk at http://bit.ly/Egesi2016AAAS.

The work was funded by the Bill & Melinda Gates Foundation, in part through Rounsley’s work while at the University of Arizona, the UK Department for International Development (DFID), and the NEXTGEN Cassava Breeding project. 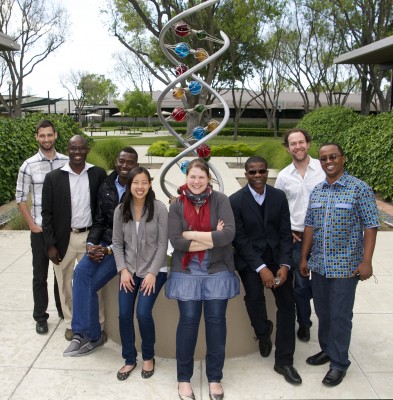 Caption: The leaves of a healthy cassava plant (left) are compared against leaves infected with cassava mosaic disease (right). The images complement a cassava genetics paper led by UC Berkeley and DOE JGI researchers that was published ahead online April 18, 2016 in Nature Biotechnology.