Muon G-2 Magnet Successfully Cooled Down and Powered Up.

It survived a month-long journey over 3200 miles, and now the delicate and complex electromagnet is well on its way to exploring the unknown. 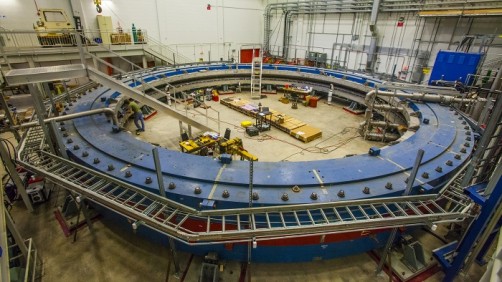 The Muon g-2 magnet in its new home at Fermilab, being prepared for this week's successful cool-down and power-up.

Newswise — Two years ago, scientists on the Muon g-2 experiment successfully brought a fragile, expensive and complex 17-ton electromagnet on a 3200-mile land and sea trek from Brookhaven National Laboratory in New York to Fermilab in Illinois. But that was just the start of its journey.

Now, the magnet is one step closer to serving its purpose as the centerpiece of an experiment to probe the mysteries of the universe with subatomic particles called muons. This week, the ring—now installed in a new, specially designed building at Fermilab—was successfully cooled down to operating temperature (minus 450 degrees Fahrenheit) and powered up, proving that even after a decade of inactivity, it remains a vital and viable scientific instrument.

Getting the electromagnet to this point took a team of dedicated people more than a year, and the results have that team breathing a collective sigh of relief. The magnet was built at Brookhaven in the 1990s for a similar muon experiment, and before the move to Fermilab, it spent more than 10 years sitting in a building, inactive.“There were some questions about whether it would still work,” says Kelly Hardin, lead technician on the Muon g-2 experiment. “We didn’t know what to expect, so to see that it actually does work is very rewarding.”

Moving the ring from New York to Illinois cost roughly 10 times less than building a new one. But it was a tricky proposition—the 52-foot-wide, 17-ton magnet, essentially three rings of aluminum with superconducting coils inside, could not be taken apart, nor twisted more than a few degrees without causing irreparable damage.Scientists sent the ring on a fantastic voyage, using a barge to bring it south around Florida and up a series of rivers to Illinois. A specially designed truck gently drove it the rest of the way to Fermilab.

The Muon g-2 experiment plans to use the magnet to build on the Brookhaven experiment but with a much more powerful particle beam. The experiment will trap muons in the magnetic field and use them to detect theoretical phantom particles that might be present, impacting the properties of the muons. But to do that, the team had to find out whether the machine could generate the needed magnetic field.

The magnet was moved into its own building on the Fermilab site. Over the past year, workers took on the painstaking task of reassembling the steel base. Two dozen 26-ton pieces of steel—and a dozen 11-ton pieces—had to be maneuvered into place with tremendous precision.

“It was like building a 750-ton Swiss watch,” says Chris Polly, project manager for the experiment.

While that assembly was taking place, other members of the team had to completely replace the control system for the magnet, redesigning it from scratch. Del Allspach, the project engineer, and Hogan Nguyen, one of the primary managers of the ring, oversaw much of this effort, as well as the construction of the infrastructure (helium lines, power conduits) needed before the ring could be cooled and powered.“That work was very challenging,” Nguyen says. “We had to stay within very strict tolerances for the alignment of the equipment.”

The tightest of those tolerances was 10 microns. For comparison, the width of a human hair is 75 microns. A red blood cell is about 5 microns across.

While assembling the components around the ring, the team also tracked down and sealed a significant helium leak, one that had been previously documented at Brookhaven. Hardin says that the team was relieved to discover that the leak was in an area that could be accessed and fixed. The successful cool-down proved that the leak had been plugged.

“That’s where the big relief comes in,” says Hardin. “We had a good team, and we worked together well.”

Bringing the ring down to its operating temperature of minus 450 degrees Fahrenheit required cooling it with a helium refrigeration system and liquid nitrogen for more than two weeks. Polly noted that this was a tricky process, since the magnet as a whole shrank by at least an inch as it cooled down. This could have damaged the delicate coils inside if it was not done slowly.

Once cooling was complete, the ring had to be powered with 5300 amps of current to produce the magnetic field. This was another slow process, with technicians easing the ring up by fewer than two amps per second and stopping every 1000 amps to check the system.

“It proves we started with a good magnet,” Allspach says. “It had been off for more than a decade, then moved across the country, installed, cooled and powered. I’m very happy to be at this point. It’s a big success for all of us.”

The next step for the magnet is a long process of “shimming,” or adjusting the magnetic field to within extraordinarily small tolerances. Fermilab is in the process of constructing a beamline that will provide muons to the magnet, and scientists expect to start measuring those muons in 2017.

For Nguyen, that step—handing the magnet off to early-career scientists, who will help carry out the experiment—is exciting. One of the thrills of the process, he says, was watching these younger members of the team learn and grow as the experiment took shape.“I can’t wait to see these younger people get to control this beautiful magnet,” he says.

Images and videos of the Muon g-2 magnet are available online.