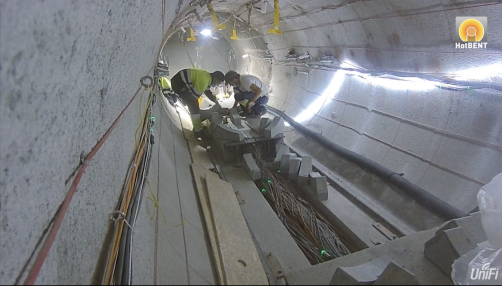 The HotBENT project is taking place at the Grimsel Test Site in Switzerland. 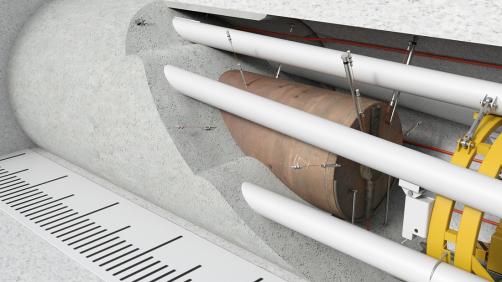 The emplacement of the bentonite buffer by an auger-machine in the HotBENT field test.

Newswise — When it comes to nuclear power, the uranium at the heart of fuel rods is also this power source’s Achilles’ heel.  When power plants shut down or the fuel rods in nuclear reactors become inefficient, the high-level nuclear waste resulting from the spent fuel created from running these plants could stay radioactive for thousands of years. Disposal concepts call for the waste to be isolated a third of a mile belowground for safe storage, enclosed within engineered barrier systems and surrounded by subsurface rock.

But there’s still the chance radionuclides might leak out if these systems lose their protective properties as it heats up due to radioactive decay. That means a lot of research effort is focused on the temperature limit up to which these systems and the natural geologic environment can be exposed.

“The concern is that heat emitted by underground nuclear waste will change the geophysical and geochemical properties of the bentonite buffer and the host rock,” said LianGe Zheng, Berkeley Lab’s lead scientist on HotBENT, whose previous computer simulation studies at Berkeley Lab helped initiate the HotBENT research. “For this long-term series of experiments, we will evaluate the thermal, hydrological, chemical, and mechanical changes in the bentonite and how that affects the material’s safety function over time.”

The HotBENT project led by Nagra (Switzerland’s National Cooperative for the Disposal of Radioactive Waste) involves the DOE and partners in Canada, Japan, the U.K., and elsewhere. A demonstrated higher temperature tolerance could allow for more radioactive waste to be safely packed within tunnels in the Earth’s subsurface.

Although the U.S has not identified a new site for long-term disposal of highly radioactive byproducts of nuclear power since Congress stopped funding the Yucca Mountain site in 2010, Finland has begun constructing a deep underground repository for such waste, and other countries are at some stage of considering repository locations for highly radioactive waste.

The HotBENT field test began in September when scientists started to deploy heaters within the research tunnel at Switzerlands’s Grimsel Test Site, a designated underground testing facility for radioactive waste disposal. At power plants, heat generated from radioactive materials normally develops when a type of uranium undergoes a fission reaction, which releases energy in the form of heat and the generation of fission products. The temperature of the four heaters in the HotBENT field test will be slowly raised over the next several months to eventually reach 200 degrees Celsius – twice the current maximum allowable temperature under consideration for similar repositories. The team has set up a large array of sensors to detect temperature and corresponding hydrologic and mechanical changes in the bentonite buffer and the surrounding rock.

Previous research by Zheng suggested that, at twice the widely used maximum temperature, the soft, clay-based bentonite does not lose much of its protective properties. Bentonite is being studied partly because the natural material would swell when water reaches it within an underground repository (due to groundwater percolation at depth). The clay material’s swelling ability can help protect canister waste from escaping because of interactions with fluids that would be less able to travel through swollen bentonite.

Zheng’s modeling study, published in Engineering Geology, indicated that about two-thirds of the key, swelling-related mineral in bentonite clay (smectite) had degraded at 200 degrees Celsius rather than 100 degrees Celsius. Yet the ability of the bentonite to swell as part of its protective function only decreased by 4% at most in the simulations.

“If the Swiss test site can largely verify the modeling results, then the bentonite buffer may be able to retain much of its protective function at much higher temperatures than previously considered,” said Zheng, noting this would allow tighter spacing, and more waste canisters, to be placed inside underground repositories, reducing the size of their overall footprint.

Zheng and his colleagues are simulating the field test setup in the laboratory using column tests about one-tenth the size of a single heating element at the Switzerland underground field test site. In the lab, the scientists will be looking at changes in the materials over a year and a half compared to five- and 15- to 20-year periods in the field. A particular focus will be understanding how much smectite degrades into another clay mineral (illite) that lacks the ability to swell.

“We want to know if high temperatures cause the minerology of the bentonite buffer to change, potentially affecting its properties like permeability and radionuclide adsorption,” said the department’s manager, Emily Stein. “It’s really important for developing the safety strategy for deep geologic repositories to understand these temperature-related processes.”

Sandia scientists led by Carlos Jové Colón will be investigating whether the heating tests at Berkeley Lab alter bentonite’s ability to swell, and how the raw material at Grimsel responds to being heated to 60 and 90 degrees Celsius. In addition, they will analyze the bentonite sample’s chemical composition, such as for the presence of the breakdown material illite, and analyze structural changes in the clay.

A research group led by Florie Caporuscio at Los Alamos National Laboratory has been studying how a mixture of bentonite and other engineered barrier materials respond to heating. They will also test types of host rock the canisters may be buried within, with the goal to see how the overall combination of materials responds to temperatures of up to 300 degrees Celsius.

“It’s important to analyze a range of conditions such as possible host rock materials like the granite, clay rocks, and so on, to inform decisions about the most suitable underground location for these nuclear repositories,” Zheng said.