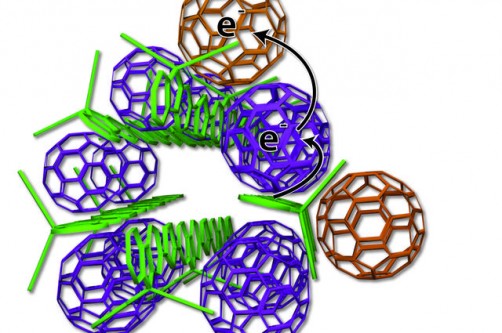 Newswise — A new material design tested in experiments at the Department of Energy's SLAC National Accelerator Laboratory could make low-cost solar panels far more efficient by greatly enhancing their ability to collect the sun’s energy and release it as electricity.

A team of University of California, Los Angeles, scientists found that by assembling the components of the panels to more closely resemble the natural systems plants use to tap the sun's energy, it may be possible to separate positive and negative charges in a stable way for up to several weeks compared to just millionths of a second – the current standard for many modern solar panels.

“In photosynthesis, plants that are exposed to sunlight use carefully organized nanoscale structures within their cells to rapidly separate charges – pulling electrons away from the positively charged molecule that is left behind, and keeping positive and negative charges separated,” said Sarah Tolbert, a UCLA professor of chemistry and one of the senior authors of the research. “That separation is the key to making the process so efficient.”

The team's X-ray studies at SLAC's Stanford Synchrotron Radiation Lightsource (SSRL), a DOE Office of Science User Facility, enabled them to see, at a microscopic level, which material design has the most ideal structure at the nanoscale for promoting this charge separation. The results are published in the June 19 edition of Science.

Plastic Panels Provide Low-cost Alternative to SiliconTo capture energy from sunlight, conventional rooftop solar cells use silicon, which can be expensive. Solar cells can also be made using lower-cost materials like plastics, but plastic cells are far less efficient -- in large part because the separated positive and negative charges in the material often recombine before they can become electrical energy.

“Modern plastic solar cells don’t have well-defined structures like plants do because we never knew how to make them before,” Tolbert said. “But this new system pulls charges apart and keeps them separated for days, or even weeks. Once you make the right structure, you can vastly improve the retention of energy.”

A Better Recipe for ‘Spaghetti and Meatballs’The UCLA-developed system is composed of strands of a polymer, the building block of plastics, that absorb sunlight and pass electrons to a fullerene, a spherical carbon molecule also known as a “buckyball.”

The materials in these types of solar cells are typically organized like a plate of cooked pasta – a disorganized mass of long, skinny polymer “spaghetti” with random fullerene “meatballs.” But this arrangement makes it difficult to get current out of the cell because the electrons sometimes hop back to the polymer spaghetti and are lost.

The researchers figured out how to arrange the elements more neatly – small bundles of uncooked spaghetti with precisely placed meatballs. Some fullerene meatballs are designed to sit inside the polymer spaghetti bundles and others are forced to stay on the outside.

Successes and Next Steps“When the charges never come back together, it becomes easier to get them out of the solar cell in the form of electricity,” said Benjamin Schwartz, a UCLA professor of chemistry and a co-author of the study. “This is the first time such long charge lifetimes have been shown using this type of material.”

Researchers found that the materials self-assemble into this ordered form when placed in close proximity. The new design is also more environmentally friendly than current technology, because the materials can assemble in water instead of more toxic organic solutions that are typically used.

“Once you make the materials, you can dump them into water and they assemble into the appropriate structure because of the way the materials are designed,” Schwartz said.

The researchers are now working on how to incorporate the technology into actual solar cells, and Tolbert said the team is planning follow-up research at SSRL.

The work was supported by the National Science Foundation and the U.S. Department of Energy, and the DOE Office of Biological and Environmental Research.

This report was adapted from a press release by the University of California, Los Angeles. View the original release here.