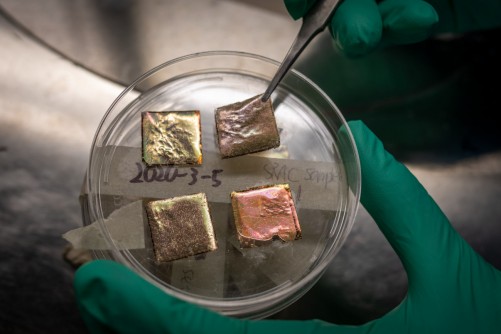 Samples of the Berkeley Lab temperature-adaptive radiative coating (TARC). The device looks like Scotch tape, and can be affixed to a rooftop.

Newswise — Scientists have developed an all-season smart-roof coating that keeps homes warm during the winter and cool during the summer – without consuming natural gas or electricity. Research findings, to be published in the Dec. 17 issue of the journal Science point, to a groundbreaking technology that outperforms commercial cool-roof systems in energy savings.

“Our all-season roof coating automatically switches from keeping you cool to warm, depending on outdoor air temperature. This is energy-free, emission-free air conditioning and heating, all in one device,” said Junqiao Wu, a faculty scientist in Berkeley Lab’s Materials Sciences Division and a UC Berkeley professor of materials science and engineering who led the study.

Today’s cool roof systems, such as reflective coatings, membranes, shingles, or tiles, have light-colored or darker “cool-colored” surfaces that cool homes by reflecting sunlight. These systems also emit some of the absorbed solar heat as thermal-infrared radiation; in this natural process known as radiative cooling, thermal-infrared light is radiated away from the surface.

The problem with many cool-roof systems is that they continue to radiate heat in the winter, which drives up heating costs, Wu explained. “Our new material – called a temperature-adaptive radiative coating or TARC – can enable energy savings by automatically turning off the radiative cooling in the winter, overcoming the problem of overcooling,” he said. TARC is the first roof coating that automatically switches between cooling in hot weather to warming in cold weather by regulating its rate of radiative cooling.

A roof for all seasons

“A few years ago, I wondered, if only there were a material that could automatically switch between radiative cooling in hot weather to heat retention in cold weather” he said. “And then I thought, vanadium dioxide can do that.”

Metals are typically good conductors of electricity and heat. In 2017, Wu and his research team discovered that electrons in vanadium dioxide behave like a metal to electricity but an insulator to heat – in other words, they conduct electricity well without conducting much heat. “This behavior contrasts with most other metals where electrons conduct heat and electricity proportionally,” Wu explained.

Vanadium dioxide below about 67 degrees Celsius (153 degrees Fahrenheit) is also transparent to (and hence not absorptive of) thermal-infrared light. But once vanadium dioxide reaches 67 degrees Celsius, it switches to a metal state, becoming absorptive of thermal-infrared light. This ability to switch from one phase to another – in this case, from an insulator to a metal – is characteristic of what’s known as a phase-change material.

Wu’s 2017 study revealed that replacing only 1.5% of the vanadium in vanadium dioxide with tungsten, a technique called “doping,” lowers the material’s phase-change threshold to 25 degrees Celsius, or 77 degrees Fahrenheit – an ideal temperature for real-world applications.

To see how vanadium dioxide would perform in a roof system, Wu and his team engineered a 2-centimeter-by-2-centimeter TARC thin-film device from three layers: a reflective bottom layer made from silver, a transparent middle layer composed of barium fluoride, and a top layer containing orderly blocks of vanadium dioxide “islands.”

TARC “looks like Scotch tape, and can be affixed to a solid surface like a rooftop,” Wu said.

The current study demonstrates vanadium dioxide’s amazing all-weather versatility in a TARC thin film, and compares its performance with a commercial dark roof coating, and a commercial white roof coating.

In a key experiment, co-lead author Kechao Tang set up a rooftop experiment at Wu’s East Bay home last summer to demonstrate the technology’s viability in a real-world environment.

A wireless measurement device set up on Wu’s balcony continuously recorded responses to changes in direct sunlight and outdoor temperature from a TARC sample, a commercial dark roof sample, and a commercial white roof sample over multiple days.

How TARC outperforms in energy savings

The researchers then used the data from the outdoor experiment to simulate how TARC would perform year-round in cities representing 15 different climate zones across the continental U.S.

Wu enlisted Ronnen Levinson, a co-author on the study who is a staff scientist and leader of the Heat Island Group in Berkeley Lab’s Energy Technologies Area, to help them refine their model of roof surface temperature. Levinson, who has studied the technology, benefits, and policies of cool surfaces such as reflective roofs, walls, and pavements for nearly three decades, developed a method to estimate TARC energy savings from a set of more than 100,000 building energy simulations that the Heat Island Group previously performed to evaluate the benefits of cool roofs and cool walls across the United States.

Wu’s team used this method to predict the annual energy savings that TARC provides by reducing the need for both cooling energy in summer and heating energy in winter.

Finnegan Reichertz, a 12th grade student at the East Bay Innovation Academy in Oakland who worked remotely as a summer intern for Wu last year, helped to simulate how TARC and the other roof materials would perform at specific times and on specific days throughout the year for each of the 15 cities or climate zones the researchers studied for the paper.

According to the simulation experiments, TARC outperforms existing roof coatings for energy saving in 12 of the 15 climate zones, particularly in regions with wide temperature variations between day and night, such as the San Francisco Bay Area, or between winter and summer, such as New York City, the researchers report.

“With TARC installed, the average household in the U.S. could save up to 10% electricity,” Tang said.

Standard cool roofs have high solar reflectance and high thermal emittance (the ability to release heat by emitting thermal-infrared radiation) even in cool weather. According to the researchers’ measurements, TARC reflects around 75% of sunlight year-round, but its thermal emittance is high (about 90%) when the ambient temperature is warm (above 25 degrees Celsius 77 degrees Fahrenheit), promoting heat loss to the sky. In cooler weather, TARC’s thermal emittance automatically switches to low (about 20%), helping to retain heat from solar absorption and indoor heating, Levinson said.

“Simple physics predicted TARC would work, but we were surprised it would work so well,” said Wu. “We originally thought the switch from warming to cooling wouldn’t be so dramatic. Our simulations, outdoor experiments, and lab experiments proved otherwise – it’s really exciting.”

The researchers plan to develop TARC prototypes on a larger scale to further test its performance as a practical roof coating. Wu said that TARC may also have potential as a thermally protective coating to prolong battery life in smartphones and laptops, and shield satellites and cars from extremely high or low temperatures. It could also be used to make temperature-regulating fabric for tents, greenhouse coverings, and even hats and jackets.

Co-lead authors on the study were Kaichen Dong and Jiachen Li.

The Molecular Foundry is a nanoscience user facility at Berkeley Lab.

This work was primarily supported by the DOE Office of Science and a Bakar Fellowship.