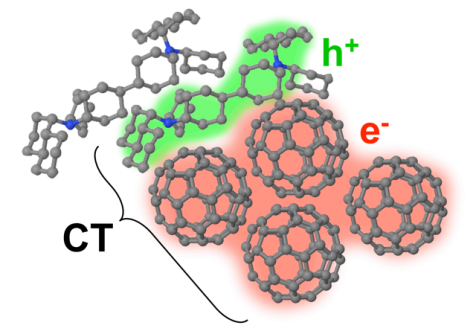 An electron wave function, indicated by orange shading, spreads across several nanocrystalline fullerene molecules in this representation of an organic solar cell heterojunction.

Newswise — The goal of making cheap organic solar cells may have gotten a little more approachable with a new understanding of the basic science of charge separation presented in a paper published online today, February 3, in Nature Communications. Co-authored by Penn State electrical engineer Noel Giebink with lead author Bethany Bernardo, an undergraduate in his group, and colleagues at IMEC in Belgium, Argonne National Lab, Northwestern, and Princeton, the paper suggests design rules for making more efficient solar cells in the future.

Organic solar cells currently have a top efficiency of approximately 10 percent in the laboratory, much less than inorganic single crystal silicon. One of the challenges to realizing efficient organic cells lies in separating the strongly bound pairs made up of a negatively charged electron and its positively charged hole that result from light absorption, collectively referred to as an exciton. The electron and hole need to be separated in order to make a current.

The way this is done is by creating a heterojunction, which is two different organic semiconductors next to each other, one of which likes to give up an electron and the other which accepts the electron, thereby splitting the original exciton into an electron and hole residing on nearby molecules. A long-standing question in the field, however, is how the nearby electron and hole – still strongly attracted to each other at this stage – manage to separate completely in order to generate current with the efficiency observed in most solar cells. Over the past few years, a new perspective has proposed that the high separation efficiency relies on a quantum effect – the electron or hole can exist in a wavelike state spread out over several nearby molecules at the same time. When the wave function of one of the carriers collapses at a location far enough away from its partner, the charges can separate more easily. Giebink and colleagues’ work provide compelling new evidence to support this interpretation and identify nanocrystallinity of the common acceptor material made of C60 molecules (also known as fullerenes or buckyballs) as the key that allows this delocalization effect to take place. This local crystalline order appears to be critical to efficient photocurrent generation in organic solar cells, says Giebink. “A common view in the community is that it takes a bunch of excess energy to break apart the exciton, which meant that there had to be a large energy level difference between the donor and acceptor materials. But that big energy offset reduces the voltage of the solar cell. Our work dispels this perceived tradeoff in light of the impact that wavefunction delocalization and local crystallinity have on the charge separation process. This result should help people design new molecules and optimize donor and acceptor morphologies that help increase solar cell voltage without sacrificing current.”

The team used various luminescence and electroabsorption spectroscopic techniques together with X-ray diffraction to reach their conclusion. Their results, detailed in the paper titled “Delocalization and dielectric screening of charge transfer states in organic photovoltaic cells,” will provide other groups with a better understanding of charge separation as they design and model more efficient organic solar cells. Noel (Chris) Giebink is assistant professor of electrical engineering and a faculty member in the Materials Research Institute at Penn State. He can be contacted at [email protected].