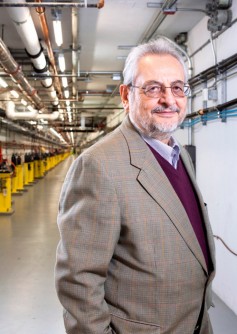 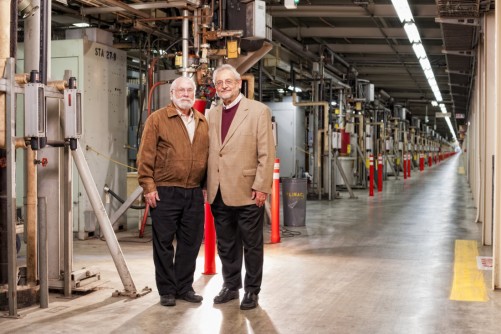 SLAC scientist Herman Winick (left) and visiting scientist Claudio Pellegrini, in the klystron gallery of SLAC's linear accelerator. Winick and Pelligrini were instrumental in making the idea for LCLS a reality. This 2012 photo celebrates the 20th anniversary of the initial proposal to use SLAC's linear accelerator to drive a free-electron laser, which was realized with the launch of the Linac Coherent Light Source in 2009.

Newswise — Claudio Pellegrini, a visiting scientist and consulting professor at the Department of Energy’s SLAC National Accelerator Laboratory and distinguished professor emeritus at the University of California, Los Angeles, will receive the 2014 Enrico Fermi Award for his role in laying the scientific groundwork for the X-ray free-electron laser.

The award, announced today, is one of the oldest and most prestigious scientific awards granted by the U.S. government. Pellegrini learned of the honor in late May when he got a surprise call from U.S. Secretary of Energy Ernest Moniz. He will travel to the White House later this year to receive the award from President Barack Obama.

“It’s really a great honor,” Pellegrini said. “I just had my 80th birthday. This is an unexpected and wonderful birthday gift.”

Pellegrini’s work was critical in establishing a new concept for how to wiggle bunches of electrons with powerful alternating magnetic fields to give off X-ray light and then greatly amplify the light pulses. The process is known as “self-amplified spontaneous emission” or SASE. This is the process that generates ultrabright X-ray laser pulses at SLAC’s Linac Coherent Light Source (LCLS), a DOE Office of Science User Facility that launched in 2009 as the world’s first “hard” or high-energy X-ray laser. Pellegrini’s work built on earlier free-electron laser research by John Madey at Stanford University.

LCLS pulses are uniquely suited to studying the structure and motion of biomolecules, exotic properties in materials and active chemistry as never before possible, at the atomic scale and with quadrillionths-of-a-second timing.

Charles V. “Chuck” Shank, director emeritus of Lawrence Berkeley National Laboratory and a senior fellow with the Howard Hughes Medical Institute, was also selected to receive the 2014 Fermi Award for his seminal contributions to ultrafast science and energy research, his leadership of national scientific and engineering communities and his service advancing the national laboratories.

“Claudio Pellegrini and Chuck Shank have advanced scientific research at the Department of Energy and the national laboratories throughout their distinguished careers, which has significantly contributed to sustained leadership in research and development in the United States,” Moniz stated in the DOE press release. “I congratulate them for their achievements and hope that the example they set will inspire future generations of scientists and engineers.”

The award has been presented since 1956 to honor the memory of Nobel laureate Enrico Fermi, a pioneer in the field of nuclear and particle physics. It is administered on behalf of the White House by the DOE. The award recognizes distinguished achievement, leadership and service related to all basic and applied research, science and technology supported by the DOE and its programs. Recipients receive a gold medal and share an honorarium of $50,000.

SLAC Director Chi-Chang Kao said, “We here at SLAC and the whole of the scientific community have Claudio to thank for the transformative research in many fields of science enabled by X-ray free-electron lasers. We realize the power of his vision in every experiment we carry out at LCLS.”

Pellegrini, like Fermi, was born in Rome and studied at the University of Rome. He joined Frascati National Laboratory after obtaining his PhD, and his formative years in physics were spent working on early particle-collider experiments in Europe.

“It was very exciting. We discovered a lot of things,” he said. His work brought him to SLAC for the first time in 1965 to attend a workshop on electron-positron colliders.

His work with particle beams, which included developing ways to overcome instabilities in the beams to make them perform better for experiments, led him to work with free-electron lasers in the 1980s while at Brookhaven National Laboratory. He later moved to UCLA, and since 2011 he has worked as a visiting scientist at SLAC, pursuing R&D projects at LCLS.

Pellegrini credits his earlier work for his breakthrough in realizing that a certain type of instability in free-electron lasers could actually be exploited to improve their operation, producing more intense pulses of light. “In my previous work with different kinds of instabilities, nature was fighting us,” he said, “but in this case it was helping us.”

Those same ideas would lead, step by step, to a succession of technical milestones and successful experiments that led Pellegrini to propose, during a SLAC workshop in 1992, the construction of an X-ray laser using electron beams from SLAC’s linear accelerator. “Claudio was an early advocate for using the SLAC accelerator for that purpose,” said John Galayda, who was project director for LCLS and is now project director for a next-generation X-ray laser called LCLS-II.

Pellegrini said his research is now focused on how to increase the peak power of LCLS and other X-ray lasers around the globe to enable more challenging experiments, such as those that seek to produce atomic-scale images of individual biological particles like proteins and viruses.

LCLS Director Mike Dunne said, “This is a much-deserved honor for Dr. Pellegrini. The concepts he developed have led to a billion-fold increase in X-ray brightness in our research facilities. Such a leap forward is normally unheard of in science.” 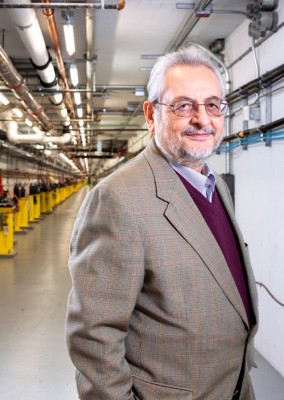 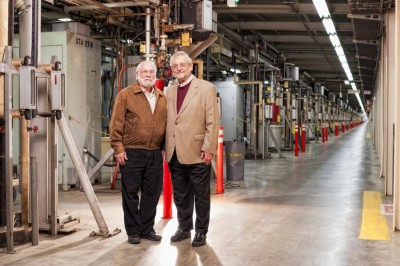 Caption: SLAC scientist Herman Winick (left) and visiting scientist Claudio Pellegrini, in the klystron gallery of SLAC's linear accelerator. Winick and Pelligrini were instrumental in making the idea for LCLS a reality. This 2012 photo celebrates the 20th anniversary of the initial proposal to use SLAC's linear accelerator to drive a free-electron laser, which was realized with the launch of the Linac Coherent Light Source in 2009.