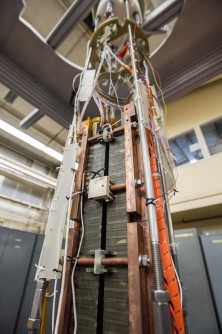 This Berkeley Lab-developed device, a niobium tin superconducting undulator prototype, set a record in magnetic field strength for a device of its kind. This type of undulator could be used to wiggle electron beams to emit light for a next generation of X-ray lasers. 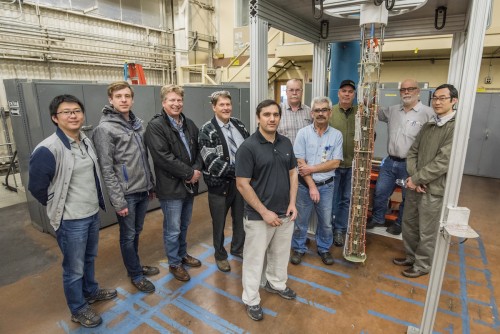 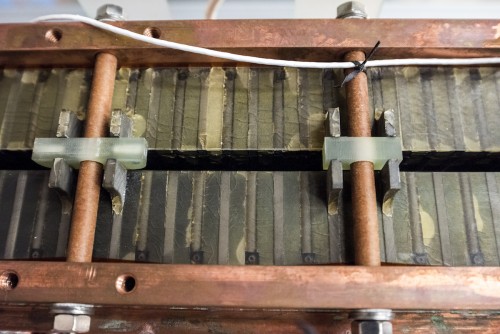 A close-up view of the superconducting undulator prototype developed at Berkeley Lab. To construct the undulator, researchers wound a pliable wire in alternating coils around a steel frame. The pliable wire was baked to form a niobium-tin compound that is very brittle but can achieve high magnetic fields when chilled to superconducting temperatures.

X-ray FELs are powerful tools for studying the microscopic structure and other properties of samples, such as proteins that are key to drug design, exotic materials relevant to electronics and energy applications, and chemistry that is central to industrial processes like fuel production.

The recent development effort was motivated by SLAC National Accelerator Laboratory’s upgrade of its Linac Coherent Light Source (LCLS), the nation’s only X-ray FEL. This upgrade, now underway, is known as LCLS-II. All existing X-ray FELS, including both LCLS and LCLS-II, use permanent magnet undulators to generate intense pulses of X-rays. These devices produce X-ray light by passing high-energy bunches of electrons through alternating magnetic fields produced by a series of permanent magnets.

Superconducting undulators (SCUs) offer another technical solution and are considered among the most promising technologies to improve the performance of the next generation FELs, and of other types of light sources, such as Berkeley Lab’s Advanced Light Source (ALS) and Argonne’s Advanced Photon Source (APS).

SCUs replace the permanent magnets in the undulator with superconducting coils. The prototype SCUs have successfully produced stronger magnetic fields than conventional undulators of the same size. Higher fields, in turn, can produce higher-energy free-electron laser light to open up a broader range of experiments.

Berkeley Lab’s 1.5-meter-long prototype undulator, which uses a superconducting material known as niobium-tin (Nb3Sn), set a record in magnetic field strength for a device of its design during testing at the Lab in September 2016.

“This is a much-anticipated innovation,” agreed Wim Leemans, Director, Accelerator Technology and Applied Physics (ATAP) . “Higher performance in a smaller footprint is something that benefits everyone -- the laboratories that host the facilities, the funding agencies, and above all, the user community.”

Argonne’s test of another superconducting material, niobium-titanium, successfully reached its performance goal, and additionally passed a bevy of quality tests. Niobium-titanium has a lower maximum magnetic field strength than niobium-tin, but is further along in its development.

“The superconducting technology in general, and especially with the niobium tin, lived up to its promise of being the highest performer,” said Ross Schlueter, Head of the Magnetics Department in Berkeley Lab’s Engineering Division. “We’re very excited about this world record. This device allows you to get a much higher photon energy” from a given electron beam energy.

“We have expertise here both in free-electron laser undulators, as demonstrated in our role in leading the construction of LCLS-II’s undulators, and in synchrotron undulator development at the ALS,” noted Soren Prestemon, Director of the Berkeley Center for Magnet Technology (BCMT), which brings together the Accelerator Technology and Applied Physics Division (ATAP) and Engineering Division, to design and build a range of magnetic devices for scientific, medical, and other applications.

Diego Arbelaez, the lead engineer in the development of Berkeley Lab’s device, said earlier work at the Lab in building superconducting undulator prototypes for a different project were useful in informing the latest design, though there were still plenty of challenges.

The niobium-tin wire is wound around a steel frame to form tightly wrapped coils in an alternating arrangement. The precision of the winding is critical for the performance of the device. Arbelaez said, “One of the questions was whether you can maintain precision in its winding even though you are going through these large temperature variations.”

After the heat treatment, the coils are placed in a mold and impregnated with epoxy to hold the superconducting coils in place. To achieve a superconducting state and demonstrate its record-setting performance, the device was immersed in a bath of liquid helium to cool it down to about minus 450 degrees Fahrenheit.

Another challenge was in developing a fast shutoff to prevent catastrophic failure during an event known as “quenching.” During a quench, there is a sudden loss of superconductivity that can be caused by a small amount of heat generation. Uncontrolled quenching could lead to rapid heating that might damage the niobium-tin and surrounding copper and ruin the device.

This is a critical issue for the niobium-tin undulators due to the extraordinary current densities they can support. Berkeley Lab’s Marcos Turqueti led the effort to engineer a quench-protection system that can detect the occurrence of quenching within a couple thousandths of a second and shut down its effects within 10 thousandths of a second.

Arbelaez also helped devise a system to correct for magnetic-field errors while the undulator is in its superconducting state.

“With superconducting undulators,” Emma said, “you don’t necessarily lower the cost but you get better performance for the same stretch of undulator.”

A superconducting undulator of an equivalent length to a permanent magnetic undulator could produce light that is at least two to three times -- perhaps up to 10 times -- more powerful, and could also access a wider range in X-ray wavelengths, Emma said, producing a more efficient FEL.

Superconducting undulators also have no macroscopic moving parts, so they could conceivably be tuned more quickly with high precision. Superconductors also are far less prone to damage by high-intensity radiation than permanent-magnet materials, a significant issue in high-power accelerators such as those that will be installed for LCLS-II.

There appears to be a clear path forward to developing superconducting undulators for upgrades of existing and new X-ray free-electron lasers, Emma said, and for other types of light sources.

“Superconducting undulators will be the technology we go to eventually, whether it’s in the next 10 or 20 years,” he said. “They are powerful enough to produce the light we are going to need -- I think it’s going to happen. People know it’s a big enough step, and we’ve got to get there.”

James Symons, Berkeley Lab’s Associate Director for Physical Sciences, said, “We look forward to building on this effort by furthering our R&D on superconducting undulator systems.” 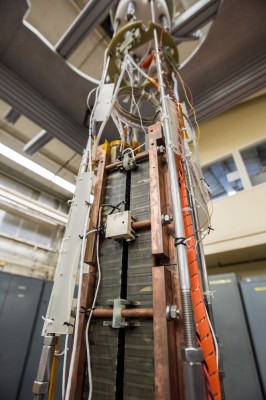 Caption: This Berkeley Lab-developed device, a niobium tin superconducting undulator prototype, set a record in magnetic field strength for a device of its kind. This type of undulator could be used to wiggle electron beams to emit light for a next generation of X-ray lasers. 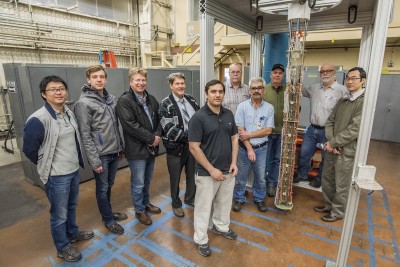 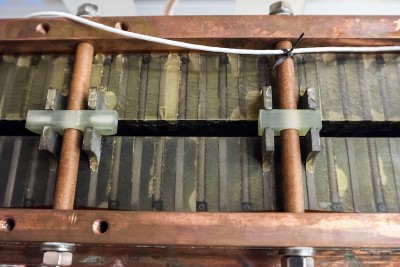 Caption: A close-up view of the superconducting undulator prototype developed at Berkeley Lab. To construct the undulator, researchers wound a pliable wire in alternating coils around a steel frame. The pliable wire was baked to form a niobium-tin compound that is very brittle but can achieve high magnetic fields when chilled to superconducting temperatures.