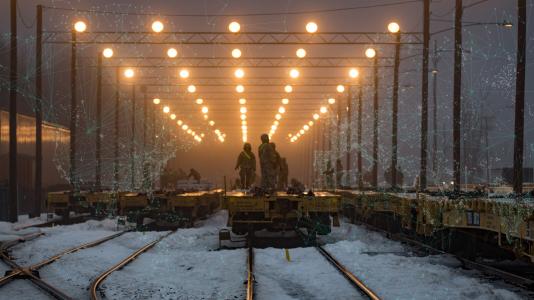 (Image courtesy of the U.S. Department of Defense and Argonne National Laboratory.)

Rare earth materials are essential to a variety of economic sectors, including healthcare and clean energy. In a new study, Argonne scientists highlighted which rare earth elements may be particularly vulnerable to disruptions.

Newswise — Rare earth materials are essential to a variety of industries. A new study from Argonne explores the effects of supply disruptions such as mine shutdowns.

From phones to fighter jets, a range of devices and machines rely on rare earth elements that are mined and refined largely in China. Disruptions to this supply can have wide-ranging consequences, but the understanding of how those disruptions play out in global markets is limited. Researchers at the U.S. Department of Energy’s (DOE) Argonne National Laboratory are using a unique computer model to understand the effects.

Most of the 17 elements classified as rare earths are not actually rare, but they are difficult and expensive to extract from the ground and separate from each other. Rare earth elements are essential to many emerging technologies, including those that support a clean energy future. They include neodymium, praseodymium and dysprosium, which are components of energy-efficient permanent magnets used in wind turbines and electric vehicles, among other products; and gadolinium, which you might recognize as the contrast agent you take before an MRI. The U.S. government classifies these elements as critical materials in part based on their importance in manufacturing products that support national security.

“At Argonne, we’re able to draw from our expertise in a range of energy systems — batteries, for example — and combine that with unique modeling and computing capabilities to do research like this.” — Matthew Riddle, assistant energy scientist at Argonne

China dominates the global rare earths market. The country produces an estimated 58 percent of mined rare earths, and it controls roughly 85 percent of the world’s refining capacity. The U.S. accounted for more than 15 percent of rare earth mining output in 2020, but this material is exported for value-added processing and production.

A variety of disruptive events can affect the supply of rare earth materials, including natural disasters, labor disputes, construction delays and — on everyone’s mind at the moment — a pandemic.

In a recently published study, Argonne researchers analyzed the potential effects of three supply disruption scenarios on 10 rare earth elements, along with a handful of associated compounds, to determine the market effects. To conduct the analysis, which was supported by the U.S. Department of Defense’s Defense Logistics Agency, they used Argonne’s Global Critical Materials (GCMat) tool.

GCMat is an agent-based model, which is a computational framework for simulating interactions among different entities in a given system. This provides the ability to forecast rare earth market dynamics by modeling decisions that individual mining projects, producers and consumers might make. These ​“agents” continuously update their product prices, supply purchases, production volumes and capacity plans in response to market prices and supply availability.

“With agent-based modeling, we can capture what happens in a market with a lot more fidelity and detail than would be possible with other types of modeling,” said Matthew Riddle, assistant energy scientist at Argonne and lead study author.

The GCMat team uses Argonne’s high performance computing Bebop cluster at the Laboratory Computing Resource Center to calibrate the model and evaluate uncertainties over a range of diverse market scenarios.

“Agent-based modeling looks at the parameters that trigger decisions, such as whether to open or close a mine, and how those decisions cascade through the market and supply chain,” said Allison Bennett Irion, study co-author and chair of Argonne’s Advanced Supply Chain Analytics initiative.

The results of the study highlighted which rare earth elements may be particularly vulnerable to disruptions. The largest price increases in response to disruptions occurred for dysprosium oxide, which is used in permanent magnets, specialty alloys and other applications. Didymium oxide, which is a mixture of neodymium and praseodymium, was also found to be prone to price surges.

In general, the analysis found that in the case of temporary scenarios — a one-year export stoppage and a two-year mine shutdown — price impacts tended to extend years beyond the disruption period. Effects on production, capacity and demand also could potentially last longer. The model suggested some mines that started up outside of China in response to a disruption would not likely be able to keep operating after primary supplies recovered.

The GCMat team is now working on changes to the model that will help align it with U.S. goals to lower greenhouse gas emissions. They are enhancing representations of rare earth magnet markets for energy-efficient motors, including those used in wind turbines and electric vehicles. And new agent-based models of the lithium-ion battery supply chain will assess how shortages of global materials might affect the adoption of battery technologies important to electric vehicle markets.

GCMat, which has also been supported by the former Office of Energy Policy and Systems Analysis at DOE, is based on Argonne’s Repast Simphony, an open-source toolkit for implementing and using agent-based modeling.

“At Argonne, we’re able to draw from our expertise in a range of energy systems — batteries, for example — and combine that with unique modeling and computing capabilities to do research like this,” Riddle said.

The researchers also plan to use GCMat to evaluate the effectiveness of strategies such as recycling, conservation and diversification of supplies for reducing the severity of disruptions in rare earth markets.

The study, ​“Agent-based modeling of supply disruptions in the global rare earths market,” was published in the January issue of Resources, Conservation and Recycling. Co-authors with Riddle and Bennett Irion include Eric Tatara, Charles Olson, Braeton Smith and Diane Graziano at Argonne; Braden Harker and David Pineault at the Defense Logistics Agency; and Elisa Alonso, who is currently at the U.S. Geological Survey.