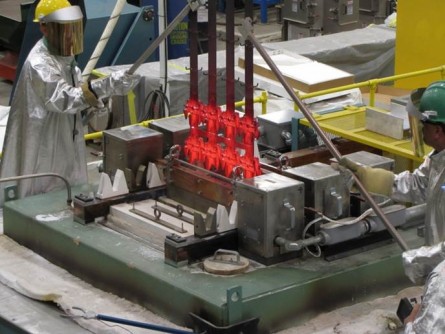 Newswise — The metal components that make up industrial machines are subject to tremendous wear and tear. But a newly patented technology by Distinguished Fellow Ali Erdemir and his team at the U.S. Department of Energy’s Argonne National Laboratory could greatly extend the lifetime of mechanical parts.

To protect machinery and increase longevity, several methods of surface hardening have been developed including pack-boriding, which lays down a boride layer on metal pieces through the diffusion of boron.

Erdemir’s work is a departure from this conventional boriding technique, which is both time-consuming and energy-intensive. Instead, his team came up with a process for ultra-fast boriding, a process that saves time, money and energy, and even alleviates environmental concerns.

In three years, Erdemir and his team took an abstract concept and turned it into an industrial-scale furnace that can deposit a boride layer 100 micrometers thick in half an hour.

To achieve this same thickness, pack-boriding would need approximately 10 hours.

Now, just a few years after completing the process, Erdemir’s group has been awarded a utility patent covering the ultra-fast nature of the technology, the range of materials that can be treated and several specific steps in the process of ultra-fast boriding.

Erdemir described the new technology as “clean and green, cost-effective and energy-efficient.”

Where pack-boriding involves baking parts in a complex mix of powders—at 1,800°F, often for 10 hours or more—the ultra-fast method uses a battery-like design to channel reactive boron into metal surfaces. Like a battery, the furnace relies on the attraction between positive and negative charges to get boron flowing swiftly toward its destination.

Because boron is supplied so quickly, the layers produced by ultra-fast boriding are more uniform and dense than the results of conventional pack-boriding.

Not only is ultra-fast boriding faster, but it creates tougher layers than any existing option for surface hardening, including the use of carbon or nitrogen in place of boron.

A thicker protective layer is unlikely to crack or come loose, so it increases the lifetime of metal pieces, making them more reliable in the long term. Machines that last longer and that require less maintenance for their parts could ultimately be much more profitable.

According to Erdemir, the heating process alone makes pack-boriding extremely energy-intensive. Ultra-fast boriding can do a better job while using 80 to 90 percent less energy.

And while the powder mix-based traditional boriding releases carbon dioxide and other hazardous emissions, the ultra-fast alternative releases almost none, he said.

Few people would look at a car, an airplane or a farming tool and appreciate the durable layers protecting its parts. But depositing this covering is an essential manufacturing step that allows machines to function with repeated use.

“The application conditions for all kinds of machinery are getting harsher,” Erdemir said. “The conventional approach to surface hardening is just not enough to sustain these machines.”

This includes automobiles, with parts that bear the burden of heavy loads, erosion and corrosion. In the aerospace industry, many components are made of titanium, which would be more resilient if treated with ultra-fast boriding.

Tools used in mining, farming and even oil and gas exploration are highly vulnerable to wear and tear, Erdemir said. His new technology could help preserve all this equipment.

“It feels great to get this patent,” Erdemir said “because it’s very exciting to see something start at the demonstration level and reach the full production level. We have real fruits to show for our labor, and we’re proud of this rapidly-growing technology that will hopefully be up and ready for commercial practice by the end of this year, if not by this fall.”

The scientists are collaborating with a private industry partner to get the large-scale furnace into commercial operation.

Erdemir plans to continue exploring ways to improve surface hardening. For now, he said he’s thrilled that the ultra-fast boriding technique is close to its first real-world applications.

The three-year project that culminated in this patented ultra-fast boriding process was funded by the U.S. Department of Energy’s Office of Energy Efficiency & Renewable Energy, Advanced Manufacturing Office.

Argonne National Laboratory seeks solutions to pressing national problems in science and technology. The nation's first national laboratory, Argonne conducts leading-edge basic and applied scientific research in virtually every scientific discipline. Argonne researchers work closely with researchers from hundreds of companies, universities, and federal, state and municipal agencies to help them solve their specific problems, advance America's scientific leadership and prepare the nation for a better future. With employees from more than 60 nations, Argonne is managed by UChicago Argonne, LLC for the U.S. Department of Energy's Office of Science. For more, visit www.anl.gov.

The Department of Energy’s Office of Science is the single largest supporter of basic research in the physical sciences in the United States, and is working to address some of the most pressing challenges of our time. For more information, please visit science.energy.gov.