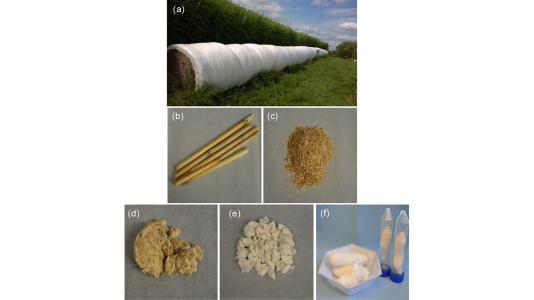 (a) Harvested bails of MxG on an MxG plantation (picture taken at Aloterra Energy, Conneaut, Ohio), (b) MxG stalks, (c) ground-up stalk, (d) after NaOH wash, (e) after bleaching, and (f) after hydrolysis with 1 M HCl. 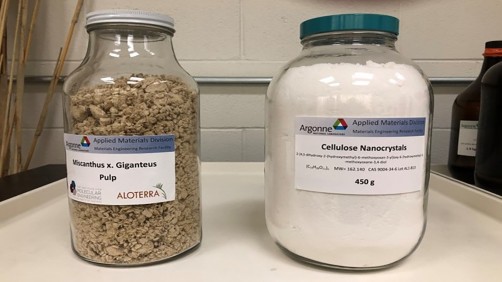 UChicago researchers discovered a way to extract cellulose nanocrystals (CNCs) from Miscanthus x. Giganteus, a fast-growing grass. CNCs have many promising applications in materials synthesis, green catalysis, biosensing and more. Building on UChicago’s work, Argonne researchers invented an optimized process and scaled it up to a level that is suitable for large-scale production.

Newswise — A joint effort by the U.S. Department of Energy’s (DOE) Argonne National Laboratory and the University of Chicago has led to a prestigious R&D 100 Award and is expected to bring an innovation closer to market so it ultimately can be used in many industrial applications.

“It shows what can be done when the two organizations work closely together.” — Stuart Rowan, UChicago and Argonne researcher

“It is very exciting to have this joint work between the University of Chicago and Argonne honored in this way,” said Stuart Rowan, UChicago’s principal investigator on the project who also holds at staff position at Argonne. ​“It shows what can be done when the two organizations work closely together.”

Cellulose nanocrystals (CNCs) come from renewable resources and have many promising applications in materials synthesis, green catalysis, biosensing and more. CNCs can be used as a replacement for carbon fibers in composites, for energy storage and conversion, water purification, and many other applications.

However, the high cost of producing CNCs at a large scale, and the relatively poor quality of the product, impede commercial development. Argonne, UChicago and Aloterra Energy LLC then worked together to solve both problems.

Rowan started this research while at Case Western Reserve University in Cleveland and brought it with him when he was hired at UChicago. UChicago researchers discovered a way to extract CNCs from Miscanthus x. Giganteus, a fast-growing grass, and the extracted CNCs exhibited desirable properties. However, the initial process developed at the bench lab scale was not suitable for large-scale production.

With this limitation in mind, in January 2017, Tirrell brought together a group of researchers from UChicago and Argonne’s MERF. Rowan described to the Argonne team the work the UChicago team had done to extract and purify CNCs from the grass, which can grow as tall as 12 feet in just two seasons. The Argonne researchers believed they could help scale up the process.

“I got excited right away when I heard about the project,” Krumdick said. ​“This was our first bio process to scale. I realized it wouldn’t be easy, but I also knew my team had the skills to tackle this type of challenge.”

Building on the work of the UChicago team, Argonne scientists invented an optimized process and scaled it up to an economical manufacturing level. The process, known as Bio2Nano, converts noninvasive, abundant Miscanthus x. Giganteus into high-quality CNCs. By combining in-situ generation of a bleaching agent, bleaching, and hydrolysis into a single step, the novel process reduces materials and energy usage as well as waste generation.

One of the biggest pulls for Rowan moving to UChicago was Argonne and the fact that molecular engineering is a joint venture between the two institutions.

“This was the first collaboration I had with anyone at Argonne, and the whole MERF team, Greg, Kris and Erik, were just fantastic to work with,” Rowan said. ​“As we further develop the technology in my lab at UChicago, I look forward to future collaborations with them and others at Argonne.” 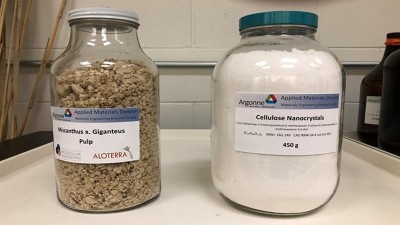 Caption: UChicago researchers discovered a way to extract cellulose nanocrystals (CNCs) from Miscanthus x. Giganteus, a fast-growing grass. CNCs have many promising applications in materials synthesis, green catalysis, biosensing and more. Building on UChicago’s work, Argonne researchers invented an optimized process and scaled it up to a level that is suitable for large-scale production.