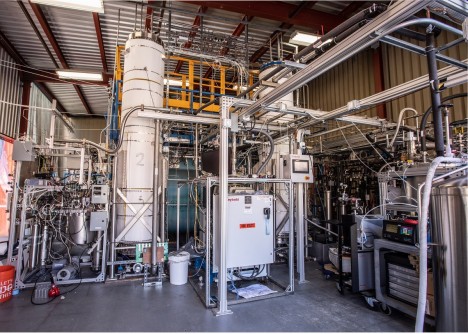 Xenon purification system at SLAC. The two central columns are each filled with almost half a ton of charcoal, which is used to produce ultra-clean xenon for the LUX-ZEPLIN (LZ) dark matter experiment.

This animation shows how krypton (red) is removed from xenon gas (blue) by flowing the combined gases through a column of charcoal (black specks). Both elements stick to the charcoal, but krypton is not as strongly attached and gets swept out first when the column is purged with helium gas.

Newswise — Sitting a mile below ground in an abandoned gold mine in South Dakota is a gigantic cylinder holding 10 tons of purified liquid xenon closely watched by more than 250 scientists around the world. That tank of xenon is the heart of the LUX-ZEPLIN (LZ) experiment, an effort to detect dark matter – the mysterious invisible substance that makes up 85% of the matter in the universe.

“People have been searching for dark matter for over 30 years, and no one has had a convincing detection yet,” said Dan Akerib, professor of particle physics and astrophysics at the Department of Energy’s (DOE) SLAC National Accelerator Laboratory. But with the help of scientists, engineers, and researchers around the globe, Akerib and his colleagues have made the LZ experiment one of the most sensitive particle detectors on the planet.

To reach that point, SLAC researchers built on their expertise in working with liquid nobles – the liquid forms of noble gases such as xenon – including advancing the technologies used to purify liquid nobles themselves and the systems for detecting rare dark matter interactions within those liquids. And, Akerib said, what researchers have learned will aid not only the search for dark matter, but also other experiments searching for rare particle physics processes.

“These are really profound mysteries of nature, and this confluence of understanding the very large and very small at the same time is very exciting,” Akerib said. “It’s possible we could learn something completely new about nature.”

A current leading candidate for dark matter is weakly interacting massive particles, or WIMPs. However, as the acronym suggests, WIMPs barely interact with ordinary matter, making them very difficult to detect, despite the fact there are theoretically many of them passing by us all the time.

To deal with that challenge, the LZ experiment first went deep underground in the former Homestake gold mine, which is now the Sanford Underground Research Facility (SURF) in Lead, South Dakota. There, the experiment is well protected from the constant bombardment of cosmic rays on Earth’s surface – a source of background noise that could make it hard to pick out hard-to-find dark matter.

Even then, finding dark matter requires a sensitive detector. For that reason, scientists look to noble gases, which are also notoriously reluctant to react with anything. This means there are very few options for what could happen when a dark matter particle, or WIMP, interacts with the atom of a noble gas, and therefore a lower chance of scientists missing an already tough-to-find interaction.

But which noble? As it turns out, “xenon is a particularly good noble for detecting dark matter,” Akerib said. Dark matter interacts most strongly with nuclei, and the interaction becomes even stronger with the atomic mass of the atom, Akerib explained. For example, xenon atoms are a little more than three times as heavy as argon atoms, but they're expected to have interactions with dark matter that are more than ten times as strong.

Another benefit: “Once you purify other contaminants out of the liquid xenon, it’s going to be very radio quiet by itself,” Akerib said. In other words, the natural radioactive decay of xenon is unlikely to get in the way of detecting the interactions between WIMPs and xenon atoms.

The trick, Akerib said, is getting pure xenon, without which all the benefits of the noble gas are moot. However, purified noble gases aren’t readily available – the fact that they don't interact with much of anything also means they are generally pretty difficult to separate from one another. And, “unfortunately you can’t just buy a purifier off the shelf that will purify noble gases,” Akerib said.

Akerib and his colleagues at SLAC therefore had to figure out a way to purify all of the liquid xenon they needed for the detector.

The biggest contaminant in xenon is krypton, which is the next lightest noble gas and has a radioactive isotope, which could mask the interactions researchers are actually looking for. To prevent krypton from becoming the particle detector’s kryptonite, Akerib and his colleagues spent several years perfecting a xenon purifying technique using what's called gas charcoal chromatography. The basic idea is to separate ingredients in a mixture based on their chemical properties as the mixture is carried through some kind of medium. Gas charcoal chromatography uses helium as the carrier gas for the mixture, and charcoal as the separation medium.

“You can think of the helium as a steady breeze through the charcoal,” Akerib explained. “Each xenon and krypton atom spends some fraction of time stuck on the charcoal and some time unstuck. When the atoms are in an unstuck state, the helium breeze sweeps them down the column.” Noble gas atoms are less sticky the smaller they are, which means krypton is somewhat less sticky than the xenon, so it gets swept away by the non-sticky helium “breeze,” thus separating the xenon from the krypton. The researchers could then capture the krypton and throw it away and then recover the xenon, Akerib said. “We did that for something like 200 cylinders of xenon gas – it was a pretty large campaign.”

The LZ experiment isn’t the first experiment SLAC has been involved in an attempt to search for new physics with xenon. The Enriched Xenon Observatory experiment (EXO-200), which ran from 2011 to 2018, isolated a specific xenon isotope to search for a process called neutrinoless double beta decay. Results from the experiment suggested the process is unimaginably rare, but a new proposed search dubbed Next EXO (nEXO) will continue the search using a detector similar to LZ's.

A different sort of electrical grid

No matter what liquid noble fills the detector, a sophisticated detection system is crucial if scientists ever hope to find something like dark matter. Above and below the tower of liquid xenon for the LZ experiment are large, high-voltage grids that create electric fields in the detector. If a dark matter particle collides with a xenon atom and knocks a few electrons off, it will free some electrons from the atom and separately create a burst of light that can be detected by photo detectors, explained Ryan Linehan, a recent PhD graduate from SLAC’s LZ group who helped develop the high voltage grids. Electric fields running through the detector then drive the free electrons up into a thin layer of gas at the top of the cylinder where they create a second light signal. “We can use that second signal together with the original signal to learn a lot of information about position, energy, particle type, and more,” Linehan said.

But these aren’t your average electrical grids – they’re carrying tens of thousands of volts, so high that any microscopic bits of dust or debris on the wire grid can cause spontaneous reactions that rip electrons out of the wire itself, Linehan said. “And those electrons can create signals that look just like the electrons that came from the xenon,” thus masking the signals they are trying to detect.

The researchers came up with two main ways to minimize the chances of getting false signals from the grids, Linehan said. First, the team used a chemical process called passivation to remove iron from the surface of the grid wires, leaving a chromium-rich surface that reduces the tendency of the wire to emit electrons. Second, to remove any dust particles, the researchers thoroughly – and very carefully – sprayed the grids with deionized water immediately before installation. “Those processes together helped us get the grids to a state where we could actually get clear data,” he said.

The LZ team published their first results online in early July, having pushed the search for dark matter farther than it's ever gone before.

Linehan and Akerib said they’re impressed by what LZ's global collaboration has been able to accomplish. “Together, we’re learning something fundamental about the universe and the nature of matter,” Akerib said. “And we’re just getting started.”

The LZ effort at SLAC is led by Akerib, together with Maria Elena Monzani, a lead scientist at SLAC and LZ deputy operations manager for computing and software, and Thomas Shutt, who was the founding spokesperson of the LZ collaboration.

LZ is supported by the U.S. Department of Energy, Office of Science and the National Energy Research Scientific Computing Center, a DOE Office of Science user facility. LZ is also supported by the U.S. National Science Foundation, the Science & Technology Facilities Council of the United Kingdom, the Portuguese Foundation for Science and Technology, and the Institute for Basic Science, Korea. Over 35 institutions of higher education and advanced research provided support to LZ. The LZ collaboration acknowledges the assistance of the Sanford Underground Research Facility.