Researchers Peel Back Another Layer of Chemistry with 'Tender' X-rays 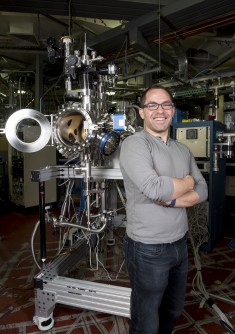 Berkeley Lab's Ethan Crumlin, working with other researchers, found a new way to study chemical processes at work in batteries and in other chemical reactions using a specialized X-ray toolkit developed at the lab’s Advanced Light Source, an X-ray source. The technique was pioneered at the ALS's Beam Line 9.3.1. 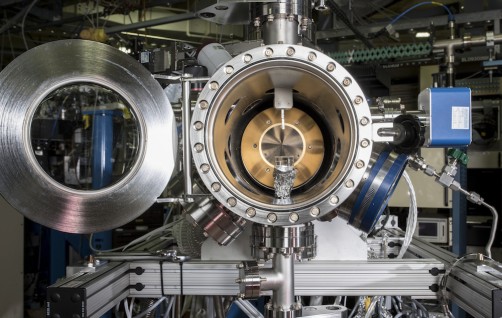 A view inside the experimental chamber used in a chemistry experiment at Berkeley Lab's Advanced Light Source. Researchers used 'tender' X-rays to explore a nanometers-thick region known as the electrochemical double layer at ALS Beam Line 9.3.1. 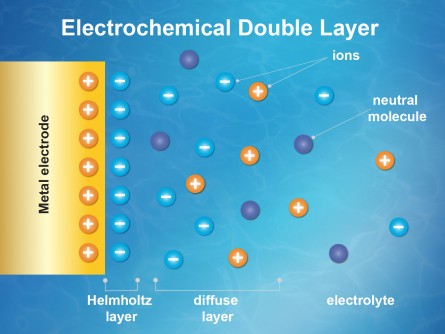 This stylized representation shows an electrochemical double layer, the heart of solid/liquid chemical interactions such as those occurring around a battery’s electrode. An experiment at Berkeley Lab used X-rays to study the properties of the double layer that formed as positively or negatively charged particles (ions, shown as plus and minus symbols) were drawn to a gold electrode (left). The experiment featured neutrally charged pyrazine molecules (dark blue) suspended in the water-based electrolyte, composed of potassium hydroxide. Researchers precisely measured changes in the charge properties of molecules caused by changes to the electric charge applied to the electrode and to the ion concentration of the electrolyte in the double-layer region.

Newswise — Scientists can now directly probe a previously hard-to-see layer of chemistry thanks to a unique X-ray toolkit developed at the Department of Energy’s Lawrence Berkeley National Laboratory (Berkeley Lab). The X-ray tools and techniques could be extended, researchers say, to provide new insight about battery performance and corrosion, a wide range of chemical reactions, and even biological and environmental processes that rely on similar chemistry.

In a first-of-its-kind experiment at Berkeley Lab’s Advanced Light Source, an X-ray source known as a synchrotron, researchers demonstrated this new, direct way to study the inner workings of an activity center in chemistry known as an “electrochemical double layer” that forms where liquids meets solids—where battery fluid (the electrolyte) meets an electrode, for example (batteries have two electrodes: an anode and a cathode).

A key breakthrough enabling the latest experiment was in tailoring “tender” X-rays—which have an energy range tuned in a middle ground between the typical high-energy (or “hard”) and low-energy (or “soft”) X-rays used in research—to focus on chemistry within the double layer of a sample electrochemical system. The related study was published Aug. 31 in Nature Communications.

Drilling down on the double layer

In a battery, this electrochemical double layer describes the layer of charged atoms or molecules in the battery’s fluid that are drawn in and cling to the surface of the electrode because of their opposite electrical charge—an essential step in battery operation—and a second and closely related zone of chemical activity that is affected by the chemistry at the electrode’s surface. The complex molecular-scale dance of charge flow and transfer within a battery’s double layer is central to its function.

The latest work shows changes in the electric “potential” in this double layer. This potential is a location-based measure of the effect of an electric field on an object—an increased potential would be found in an electric charge moving toward a lightbulb, and flows to a lower potential after powering on the lightbulb.

“To be able to directly probe any attribute of the double layer is a significant advancement,” said Ethan Crumlin, a research scientist at Berkeley Lab’s ALS who led the experiment. “Essentially, we now have a direct map, showing how potential within the double layer change based on adjustments to the electrode charge and electrolyte concentration. Independent of a model, we can directly see this—it’s literally a picture of the system at that time.”

He added, “This will help us with guidance of theoretical models as well as materials design and development of improved electrochemical, environmental, biological and chemical systems.”

Zahid Hussain, division deputy for scientific support at the ALS, who participated in the experiment, added, “The problem of understanding solid/liquid interfaces has been known for 50-plus years—everybody has been using simulations and modeling to try to conceive of what’s at work.” The latest work has narrowed the list of candidate models that explain what’s at work in the double layer.

Hussain more than a decade ago had helped to pioneer X-ray tools and techniques at the ALS, which dozens of other research sites have since adopted, that allow researchers to study another important class of chemical reactions: those that occur between solids and gases.

There was a clear need to create new study tools for solid/liquid reactions, too, he said. “Solid/liquid interfaces are key for all kinds of research, from batteries to fuel cells to artificial photosynthesis,” the latter which seeks to synthesize plants’ conversion of sunlight into energy.

Hubert Gasteiger, a chemistry professor at the Technical University of Munich and the university’s chair of technical electrochemistry who is familiar with the latest experiment, said, “This work is already quite applicable to real problems,” as it provides new insight about the potential distribution within the double layer.

“No one has been able to look into this roughly 10-nanometer-thin region of the electrochemical double layer in this way before,” he said. “This is one of the first papers where you have a probe of the potential distribution here. Using this tool to validate double-layer models I think would give us insight into many electrochemical systems that are of industrial relevance.”

In the experiment, researchers from Berkeley Lab and Shanghai studied the active chemistry of a gold electrode and a water-containing electrolyte that also contained a neutrally charged molecule called pyrazine. They used a technique called ambient pressure X-ray photoelectron spectroscopy (APXPS) to measure the potential distribution for water and pyrazine molecules across the solid/liquid interface in response to changes in the electrode potential and the electrolyte concentration.

The experiment demonstrated a new, direct way to precisely measure a potential drop in the stored electrical energy within the double layer’s electrolyte solution. These measurements also allowed researchers to determine associated charge properties across the interface (known as the “potential of zero charge” or “pzc”).

Importantly, the technique is well-suited to active chemistry, and there are plans to add new capabilities to make this technique more robust for studying finer details during the course of chemical reactions, and to bring in other complementary X-ray study techniques to add new details, Hussain said.

An upgrade to the X-ray beamline where the experiment was conducted is now in progress and is expected to conclude early next year. Also, a brand new beamline that will marry this and several other X-ray capabilities for energy-related research, dubbed AMBER (Advanced Materials Beamline for Energy Research) is under construction at the ALS and is scheduled to begin operating in 2018.

“What’s absolutely key to these new experiments is that they will be carried out in actual, operating conditions—in a working electrochemical cell,” Hussain said. “Ultimately, we will be able to understand how a material behaves down to the level of electrons and atoms, and also to understand charge-transfer and corrosion,” a key problem in battery longevity.

Researchers from the Joint Center for Artificial Photosynthesis, the Joint Center for Energy Storage Research, the Gwangju Institute of Science and Technology in the Republic of Korea, the Shanghai Institute of Microsystem and Information Technology in China, and the School of Physical Science and Technology in China participated in this research. The work was supported by the U.S. Department of Energy Office Science, the National Natural Science Foundation of China, and the Chinese Academy of Sciences-Shanghai Science Research Center. 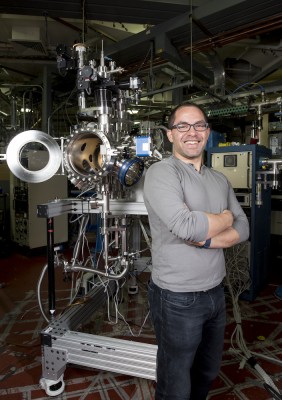 Caption: Berkeley Lab's Ethan Crumlin, working with other researchers, found a new way to study chemical processes at work in batteries and in other chemical reactions using a specialized X-ray toolkit developed at the lab’s Advanced Light Source, an X-ray source. The technique was pioneered at the ALS's Beam Line 9.3.1. 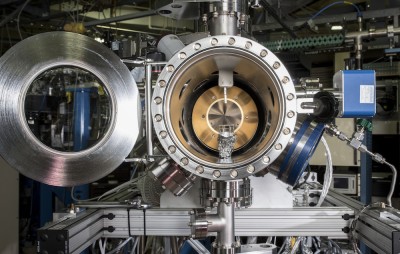 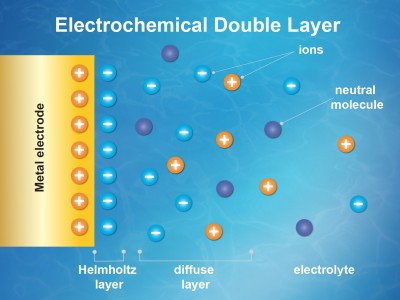 Caption: This stylized representation shows an electrochemical double layer, the heart of solid/liquid chemical interactions such as those occurring around a battery’s electrode. An experiment at Berkeley Lab used X-rays to study the properties of the double layer that formed as positively or negatively charged particles (ions, shown as plus and minus symbols) were drawn to a gold electrode (left). The experiment featured neutrally charged pyrazine molecules (dark blue) suspended in the water-based electrolyte, composed of potassium hydroxide. Researchers precisely measured changes in the charge properties of molecules caused by changes to the electric charge applied to the electrode and to the ion concentration of the electrolyte in the double-layer region.