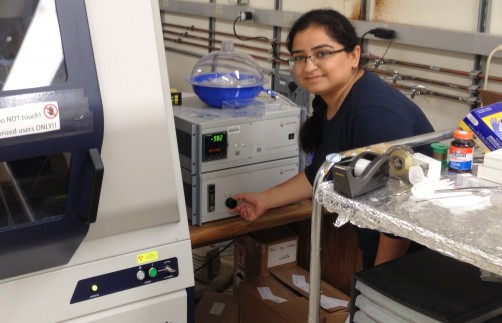 Roopali Kukreja, working in a laboratory at the University of California, San Diego. 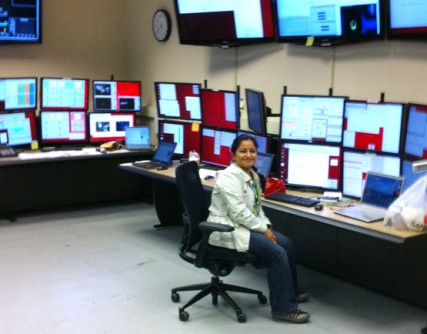 Newswise — Roopali Kukreja, a former researcher at the Department of Energy’s SLAC National Accelerator Laboratory who received her PhD in materials science at Stanford University last year, will be honored during a SLAC conference next month with the Melvin P. Klein Scientific Development Award for her X-ray studies of nanoscale magnetic and electrical properties of materials.

The annual award, which includes a $1,000 prize, recognizes a student or postdoctoral researcher who used SLAC’s Stanford Synchrotron Radiation Lightsource, an X-ray research facility. The award honors its namesake, a Lawrence Berkeley National Laboratory biophysicist who was a pioneer in adapting X-ray and other techniques for exploring biology, including the molecular machinery plants use to harness the sun’s energy and release oxygen into the air we breathe.

Kukreja, now a postdoctoral researcher at University of California, San Diego, first worked in a research environment during an internship at the Swiss Federal Institute of Technology of Lausanne while pursuing a bachelor’s degree at the Indian Institute of Technology in Bombay. “I worked at growing and characterizing materials there, and I really enjoyed myself during those three months,” she said. “I came back and decided to do another science project.”

She joined Stanford as a graduate student in 2008, and the following year she became affiliated with SLAC.

“My interest had always been in materials science, and when I came to Stanford I thought I would get more into semiconductor research and electrical engineering,” Kukreja said.

But Jo Stöhr, a professor of photon science at SLAC and Stanford who was then moving from his post as SSRL director to lead a new and unique X-ray facility, SLAC’s Linac Coherent Light Source (LCLS) X-ray laser, suggested that she consider X-ray science. SSRL and LCLS are both DOE Office of Science User Facilities.

“My very first X-ray experience was actually at SLAC -– I didn’t know much about synchrotrons when I joined SLAC," Kukreja said. "Everything I learned there was a completely new skill set.”

She played a part in experiments at both SSRL and LCLS, and her doctoral thesis work focused on developing ultrasensitive tools at SSRL to directly measure, for the first time, a magnetic property in electrons known as a “spin current” that scientists hope to tap for a next-generation form of electronics called “spintronics.”

Kukreja said, “We had conducted several experiments at SSRL that we just spent troubleshooting, day after day. We kept fixing the electronics and the setup. We really did face a lot of problems. One of my proudest moments was when, after three years, everything just worked and we saw the extremely small spin-current signal. We had been struggling for so long and it was finally there.”

Stöhr, who oversaw Kukreja’s thesis work, said in a statement supporting her selection for the Klein Award, “The success of the experiment was due to her careful and systematic work. Roopali is a very enthusiastic, persistent and hard-working scientist and without her tremendous patience and passion this extremely difficult thesis problem could not have been completed.”

Her data analysis work for a pioneering LCLS experiment that clocked trillionth-of-a-second electrical switching in a naturally magnetic material -– relevant to the switching that transistors perform in computer chips -– also factored into her selection for the award.

“In the transistor study, the most challenging part was in analyzing the data and trying to understand what it means,” she said. “That took about two years.”

Kukreja recalled that members of her research group are among the previous winners of the Klein Award, and when they were selected “I was still struggling with the spin-current research –– I didn’t imagine I would be the one applying.”

The award, she said, “makes me happy and it’s very nice that the work has been recognized.”

In her current role at UCSD, Kukreja still returns to SSRL to conduct X-ray experiments that focus on magnetic properties of materials, and she also participates in the fabrication of exotic materials used in these experiments.

She said she hopes to remain in an academic research environment and to work toward a professorship. 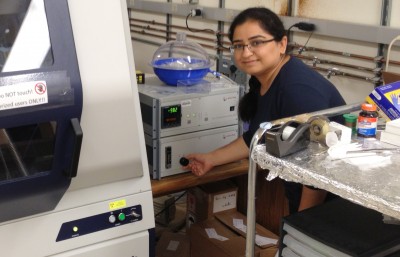 Caption: Roopali Kukreja, working in a laboratory at the University of California, San Diego. 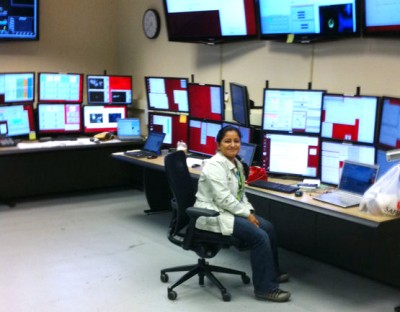