This month: Exploring the quantum side of gravity, an enzyme action movie, and an algorithm for protein prediction

This video shows steps of the enzymatic reaction that makes a double-ringed molecule, which is the structural starting point to produce molecules in a large class of antibiotics. 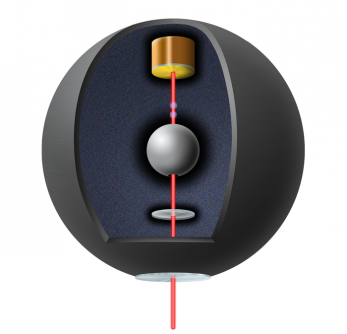 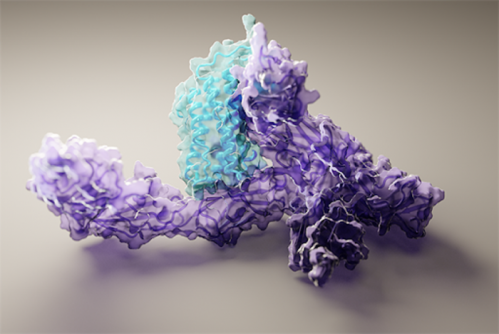 Researchers used artificial intelligence to generate hundreds of new protein structures, including this 3D view of human interleukin-12 bound to its receptor.

Is Gravity a Quantum Force?
Scientists at Berkeley Lab and the National Institute of Standards and Technology seek to find out.

Adapted from a NIST news release.

Einstein’s theory of general relativity, which describes gravity as a curvature of space-time, explains a multitude of gravitational phenomena.

But that theory falls apart within the tiniest of volumes – the center of a black hole or the universe at its explosive birth, when it was smaller than the diameter of an atom. That’s where quantum mechanics ought to dominate – yet over the past eight decades, expert after expert, including Einstein, has been unable to unite quantum theory with gravity.

Now, researchers at Berkeley Lab and the National Institute of Standards and Technology (NIST) have now proposed an experiment that may settle the persistent question: Is gravity truly a quantum force? They recently described their work in the journal Physical Review X Quantum.

The experiment takes advantage of two of the weirdest properties of quantum theory: the superposition principle, which holds that an undisturbed atomic particle can be described as a wave, with some probability of being in two places at once; and entanglement, a phenomenon in which two particles can be so strongly correlated that they behave as a single entity.

The experiment was proposed by Daniel Carney, a physicist in Berkeley Lab’s Physics Division; Holger Müller, an associate professor of physics at UC Berkeley and faculty scientist in Berkeley Lab’s Molecular Biophysics and Integrated Bioimaging Division; and Jake Taylor of NIST’s Joint Quantum Institute. The scheme employs a cold cloud of atoms, trapped inside an atomic interferometer, to test if two massive bodies can indeed become entangled by gravity.

Although the ideal experiment may be a decade or more from being built, a preliminary version could be built in just a few years.

“Trying to merge quantum mechanics and general relativity into a single framework brings up many deep problems,” Carney said. “Our experiment would try to answer the simplest possible question: does the gravitational field itself obey the laws of quantum mechanics at all?”

Scientists who specialize in studying the atom-by-atom choreography of enzymes have revealed new insights into the function of isopenicillin N synthase, an enzyme needed to produce some of the world’s most critical antibiotics.

The team of scientists from Oxford University, Diamond Light Source and Berkeley Lab used a combination of X-ray methods to generate an action storyboard showing how isopenicillin N synthase remodels a linear precursor molecule into a distinctive double-ringed molecule. This two-ringed molecule is the starting structural template for a large class of complex molecules with antibiotic properties known as beta-lactams.

“Penicillin is one of the first antibiotics discovered and is still widely used, but the biological process that is responsible for the formation of penicillin and related cephalosporin antibiotics is not completely understood,” said Jan Kern, a Berkeley Lab staff scientist and one of the new study’s lead authors. “We used our ‘molecular movie’ approach to take snapshots of the enzyme while it is reacting with its substrate and molecular oxygen, and we are now able to better understand the first steps in this ring-closure reaction.”

According to Kern, the new details will help scientists modify isopenicillin N synthase to synthesize other novel antibiotics and also have implications for understanding the reaction mechanism of a larger group of related enzymes, including those involved in DNA/RNA repair and the human tissue response to low oxygen.

The team’s approach combines X-ray crystallographic and X-ray spectroscopic data to examine the movement of specific atoms at different time points in a reaction. In the case of isopenicillin N synthase, the scientists studied how an iron atom in the enzyme’s active site interacts with molecular oxygen (O2) to catalyze the ring-building reaction. The data was gathered at Diamond Light Source, in the United Kingdom; the Sub Angstrom Compact Light Source in Japan and the Linac Coherent Light Source (LCLS) at SLAC National Accelerator Laboratory.

The study was published in Science Advances. The LCLS is a DOE Office of Science National User Facility.

“The dream of predicting a protein shape just from its gene sequence is now a reality,” said Paul Adams, Associate Laboratory Director for Biosciences at Berkeley Lab. For Adams and other structural biologists who study proteins, predicting their shape offers a key to understanding their function and accelerating treatments for diseases like cancer and COVID-19.

The current approaches to accurately mapping that shape, however, usually rely on complex experiments at synchrotrons. But even these sophisticated processes have their limitations — the data and quality aren’t always sufficient to understand a protein at an atomic level. By applying powerful machine learning methods to the large library of protein structures it is now possible to predict a protein’s shape from its gene sequence.

Researchers in Berkeley Lab’s Molecular Biophysics & Integrated Bioimaging Division joined an international effort led by the University of Washington to produce a computer software tool called RoseTTAFold. The algorithm simultaneously takes into account patterns, distances, and coordinates of amino acids. As these data inputs flow in, the tool assesses relationships within and between structures, eventually helping to build a very detailed picture of a protein’s shape.

To verify the accuracy of the predictions, the subteam of structural biologists led by Adams used a RoseTTAFold prediction to solve the structure of a new protein from experimental data they had previously collected. In addition, Randy Read of Cambridge University, who collaborates with Adams on the development of the Phenix software suite for automated determination of molecular structures, tested out the new program on crystallographic data that also had proved impossible to solve using existing methods.

Accurate structural models can provide insight into how mutations in specific proteins can lead to disease. “These prediction tools will catalyze more structural biology experiments to understand the fine chemical details of proteins that the other prediction methods can’t provide,” said Adams. “All of this will help advance our fundamental understanding of biology, design new and improved drugs, and help engineer proteins for the growing bioeconomy.” 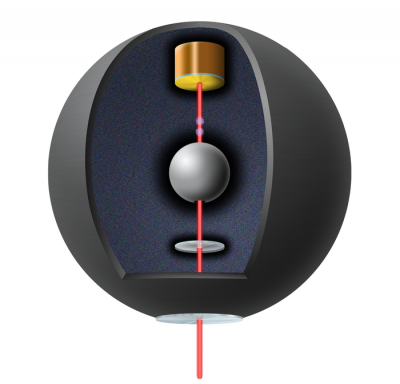 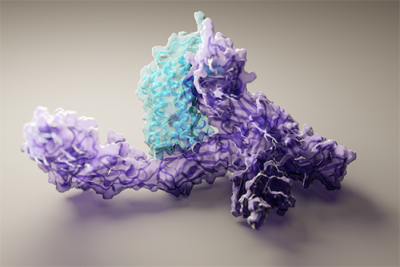 Caption: Researchers used artificial intelligence to generate hundreds of new protein structures, including this 3D view of human interleukin-12 bound to its receptor.