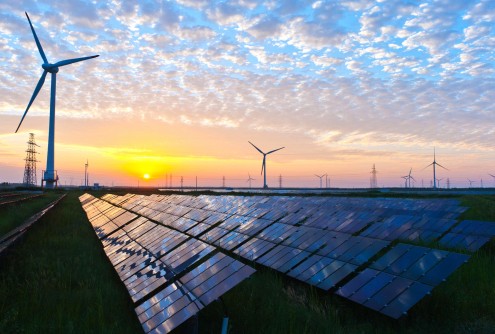 An array of solar panels and windmills. 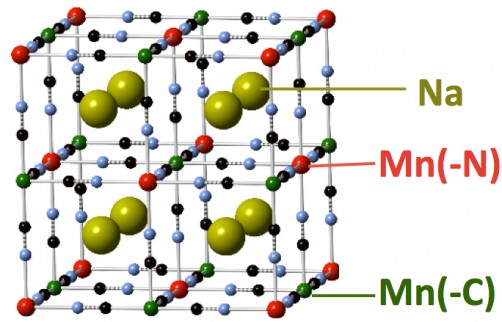 The atomic structure of the anode material that achieved high performance in a sodium-ion battery. Sodium (Na) atoms and manganese (Mn) atoms are labeled.

Newswise — Scientists have discovered a novel chemical state of the element manganese. This chemical state, first proposed about 90 years ago, enables a high-performance, low-cost sodium-ion battery that could quickly and efficiently store and distribute energy produced by solar panels and wind turbines across the electrical grid.

This direct proof of a previously unconfirmed charge state in a manganese-containing battery component could inspire new avenues of exploration for battery innovations.

X-ray experiments at the U.S. Department of Energy’s Lawrence Berkeley National Laboratory (Berkeley Lab) were key in the discovery. The study results were published Feb. 28 in the journal Nature Communications.

Scientists at Berkeley Lab and New York University participated in the study, which was led by researchers at Natron Energy, formerly Alveo Energy, a Palo Alto, California-based battery technology company.

The battery that Natron Energy supplied for the study features an unconventional design for an anode, which is one of its two electrodes. Compared with the relatively mature designs of anodes used in lithium-ion batteries, anodes for sodium-ion batteries remain an active focus of R&D.

The anode featured in this latest study is made up of a blend of elements – including manganese, carbon and nitrogen – that is chemically similar to the formula of the iron-containing paint pigment known as Prussian blue.

“Typically, in lithium-ion and sodium-ion batteries, the anode is more often carbon-based,” said Wanli Yang a staff scientist at Berkeley Lab’s Advanced Light Source, the source of X-rays that were used in the battery experiments.

But in this case, both of the battery’s electrodes utilize the same type of materials based on elements known as “transition metals” that are useful in chemistry because they can exhibit various charged states. The other electrode, called a cathode, contains copper, nitrogen, carbon, and iron.

“The very interesting part here is that both electrodes are based on the chemistry of transition metals in the same type of materials,” he added, with iron in the cathode and a special manganese chemistry in the anode.

“One of the direct benefits of utilizing such materials for both electrodes in the battery is that neither of the two electrodes fundamentally limits the power capability, cycle life, or cost of the device,” said Colin Wessells, CEO at Natron Energy. The battery outperforms the Department of Energy’s cycle-life and price targets for grid-scale energy storage, as the researchers report in their latest study.

Wessells noted that the battery is very stable, its materials are abundant, its overall cost is competitive with conventional lead-acid batteries, and it has a lesser environmental footprint than conventional batteries.

The battery has been shown to deliver up to 90 percent of its total energy in a very fast, five-minute discharge, and to retain about 95 percent of its discharge capacity for 1,000 cycles. It offers an alternative to gravity-based energy storage systems for electric grid, in which water is pumped uphill and then released downhill on demand to generate electricity.

Just how the battery achieves its high performance, though, had puzzled researchers.

There was speculation, dating back to a 1928 German-language journal article, that manganese could exist in a so-called “1-plus” or “monovalent” state, which means that a manganese atom in this state loses only a single electron. This is unusual, as manganese atoms typically are known to give up two or more electrons, or no electrons, in chemical reactions, but not just one.

Such a novel chemical state would enable a voltage range that is useful for battery anodes. But there hadn’t been any measurements confirming this monovalent form of manganese.

The Natron Energy researchers studied the battery materials at Berkeley Lab’s Molecular Foundry, a nanoscience center, and then offered up some sample battery cells for study at the ALS.

The first round of X-ray experiments at the ALS, which used a technique called soft X-ray absorption spectroscopy, appeared to show mainly the 2-plus form of manganese.

“We only caught a hint (of another form) in the initial tests, and had to rely heavily on theory to speculate about a different state,” said Andrew Wray at New York University, who performed the theoretical calculations.

Then the team turned to a newly built system at the ALS, dubbed in situ resonant inelastic X-ray scattering, or iRIXS. The technique, which provides a high-sensitivity probe of the internal chemistry of materials, showed a telltale contrast in the electrons during the battery’s charge and discharge cycles.

“A very clear contrast immediately shows up with RIXS,” Yang said. “We later realized that manganese 1-plus behaves very, very closely to the typical 2-plus state in other conventional spectroscopy,” which is why it had been difficult to detect for so many decades.

Wray added, “The analysis of the RIXS results not only confirms the manganese 1-plus state; it also shows that the special circumstances giving rise to this state make it easier for electrons to travel in the material. This is likely why such an unusual battery electrode performs so well.”

Commercial prototypes based on the battery tested at the Lab entered customer beta testing earlier this year, Wessells noted. In addition to grid applications, Natron Energy is promoting the technology for data centers’ emergency power, and for heavy equipment such as electric forklifts, among other possible applications.

Yang said that the chemical puzzle solved in the latest study could inspire other R&D in new types of battery electrodes. “The operation of a battery could drive the emergence of atypical chemical states that do not exist in our conventional thinking. This basic understanding could trigger other novel designs, and open our eyes beyond our conventional wisdom” on electrode materials, he said.

“This study was like a perfect package, with combined industry, national lab, and university contributions,” Yang said. 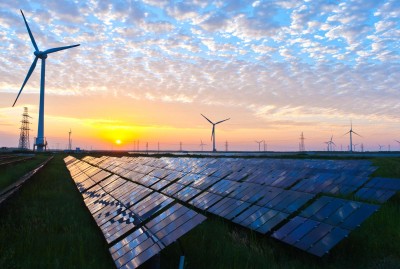 Caption: An array of solar panels and windmills. 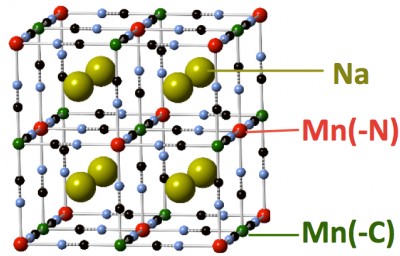 Caption: The atomic structure of the anode material that achieved high performance in a sodium-ion battery. Sodium (Na) atoms and manganese (Mn) atoms are labeled.