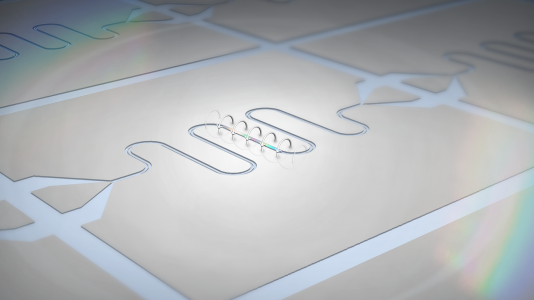 Researchers at Argonne have demonstrated an on-chip quantum circuit and realized strong coupling between a superconducting resonator and a magnetic device. The results introduce a new platform for investigating on-chip quantum magnonics and quantum information processing.

Quantum computing promises to revolutionize the ways in which scientists can process and manipulate information. The physical and material underpinnings for quantum technologies are still being explored, and researchers continue to look for new ways in which information can be manipulated and exchanged at the quantum level.

In a recent study, scientists at the U.S. Department of Energy’s (DOE) Argonne National Laboratory have created a miniaturized chip-based superconducting circuit that couples quantum waves of magnetic spins called magnons to photons of equivalent energy. Through the development of this “on chip” approach that marries magnetism and superconductivity for manipulation of quantum information, this fundamental discovery could help to lay the foundation for future advancements in quantum computing.

“By pairing the right length of resonator with the right energy of our magnons and photons, we are in essence creating a kind of echo chamber for energy and quantum information,” ― Valentine Novosad, Argonne materials scientist.

Magnons emerge in magnetically ordered systems as excitations within a magnetic material that cause an oscillation of the magnetization directions at each atom in the material — a phenomenon called a spin wave. “You can think of it like having an array of compass needles that are all magnetically linked together,” said Argonne materials scientist Valentine Novosad, an author of the study. “If you kick one in a particular direction, it will cause a wave that propagates through the rest.”

Just as photons of light can be thought of as both waves and particles, so too can magnons. “The electromagnetic wave represented by a photon is equivalent to the spin wave represented by a magnon — the two are analogues of each other,” said Argonne postdoctoral researcher Yi Li, another author of the study.

Because photons and magnons share such a close relationship to each other, and both contain a magnetic field component, the Argonne scientists sought a way to couple the two together. The magnons and photons “talk” to each other through a superconducting microwave cavity, which carries microwave photons with an energy identical to the energy of magnons in the magnetic systems that could be paired to it.

Using a superconducting resonator with a coplanar geometry proved effective because it allowed the researchers to transmit a microwave current with low loss. Additionally, it also allowed them to conveniently define the frequency of photons for coupling to the magnons.

“By pairing the right length of resonator with the right energy of our magnons and photons, we are in essence creating a kind of echo chamber for energy and quantum information,” Novosad said. “The excitations stay in the resonator for a much longer length of time, and when it comes to doing quantum computing, those are the precious moments during which we can perform operations.”

Because the dimensions of the resonator determine the frequency of the microwave photon, magnetic fields are required to tune the magnon to match it.

“You can think of it like tuning a guitar or a violin,” Novosad said. “The length of your string — in this case, our resonator of photons — is fixed. Independently, for the magnons, we can tune the instrument by adjusting the applied magnetic field, which is similar to modifying the amount of tension on the string.”

Ultimately, Li said, the combination of a superconducting and a magnetic system allows for precise coupling and decoupling of the magnon and photon, presenting opportunities for manipulating quantum information.

Argonne’s Center for Nanoscale Materials, a DOE Office of Science User Facility, was used to lithographically process the resonator.

A paper based on the study, “Strong coupling between magnons and microwave photons in on-chip ferromagnet-superconductor thin-film devices,” appeared in the Sept. 3 issue of Physical Review Letters and was also highlighted in the Editors’ Suggestion.

The research was funded by DOE’s Office of Science (Office of Basic Energy Sciences). 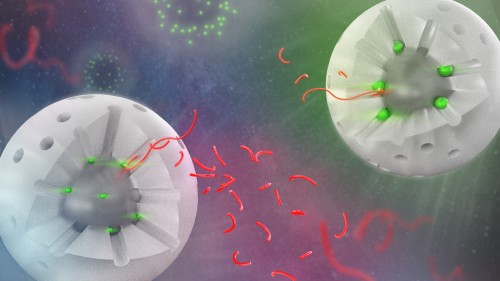