This movie shows a shock wave passing through thin diamond. The movie uses a sequence of images that were collected at different time points using SLAC's Linac Coherent Light source X-ray laser. The movie slows down a process that spanned just 3 nanoseconds, or billionths of a second, and is measured in tens of microns, or hundredths of millimeters. 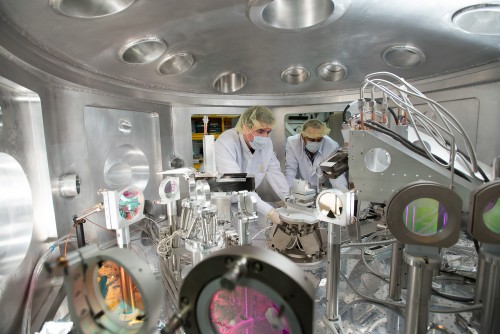 This sequence of phase-contrast images (a-d) shows a shock wave passing through diamond. The time delay after the start of the shock wave is displayed in nanoseconds (“ns”) for each image. Images e-h are enhanced to more clearly reveal the shock wave features. The dotted box in Figure f shows the area used to measure the compression of the diamond sample caused by the light-triggered shock wave.

Newswise — Researchers have used an X-ray laser to record, in detail never possible before, the microscopic motion and effects of shock waves rippling across diamond.

The technique, developed at the Department of Energy's SLAC National Accelerator Laboratory, allows scientists to precisely explore the complex physics driving massive star explosions, which are critical for understanding fusion energy, and to improve scientific models used to study these phenomena.

"What is really exciting is that we can capture images of what happens on microscopic scales," said Bob Nagler, a staff scientist at the Linac Coherent Light Source (LCLS) X-ray laser, a DOE Office of Science User Facility. "People have used X-rays to produce images of shock waves, but never on the tiny scale that LCLS makes possible.” The results were published June 18 in Scientific Reports.

The ability to measure shock wave properties so clearly at this scale, down to one-thousandth of a meter, can be useful to understanding the fundamental physics at work on far larger scales, too, he said.

Researchers compiled the resulting X-ray images into an ultra-slow-motion "movie" about 3 billionths of a second long that shows how a shock wave whips through the diamond faster than the speed of sound.

"LCLS’s pulses, just 50 quadrillionths of a second long, ‘freeze’ the motion of this elastic wave as it's propagating through the material," said Andreas Schropp, the lead author of the study, who is a staff scientist at Germany's DESY lab.

The experiment yielded information about the compression of the diamond's structure and the pressure changes caused by the shock wave.

Upgrades Provide a View Inside Shocked MaterialsThe experiment was one of the first using a specialized Matter in Extreme Conditions experimental station at LCLS that is designed to explore extreme states, including those never before directly measured and observed, using powerful X-rays.

The optical lasers have since been upgraded to reach higher powers, and scientists now have the ability to couple shock wave imaging with another X-ray technique, called wide-angle X-ray scattering, that allows them to explore changes to the atomic structure of the material during a shock wave.

"This allows us to see how materials behave when they melt, to see the dynamics of materials as they change from one structure to the next," Nagler said. "This has implications for geoscience, such as understanding the physics of matter deep inside the interior of large planets."

Nagler said SLAC scientists have also just completed a new standardized platform that will make it far easier to set up and conduct a wide range of shock wave experiments using different materials and laser configurations. 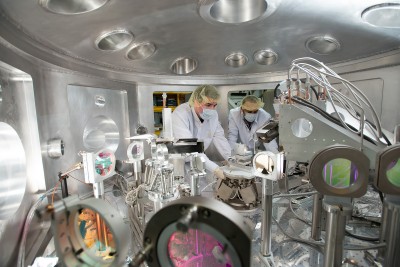 Caption: This sequence of phase-contrast images (a-d) shows a shock wave passing through diamond. The time delay after the start of the shock wave is displayed in nanoseconds (“ns”) for each image. Images e-h are enhanced to more clearly reveal the shock wave features. The dotted box in Figure f shows the area used to measure the compression of the diamond sample caused by the light-triggered shock wave.