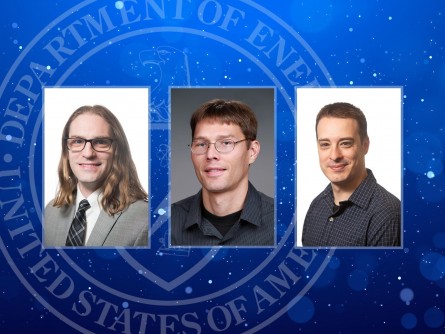 From left: Marcel Baer, Nathan Tallent, and Ben Loer are recipients of a 2021 Early Career Research Program award from the U.S. Department of Energy.

Newswise — A trio of Pacific Northwest National Laboratory (PNNL) researchers have each received a 2021 Early Career Research Program award from the U.S. Department of Energy (DOE) in the highly competitive program. Awards to DOE-based researchers total $500,000 per year for five years for salary and research expenses.

Marcel Baer’s research will examine the structure and function of proteins to design building blocks for new materials that help address challenges in energy production and storage. His research will exploit the complex functionality of nature’s modular material design to improve energy technologies, such as solar cells, batteries, and chemical reactors, that need to operate in harsh environments. Baer’s research uses computational approaches based in quantum and molecular mechanics to model nonnatural polymers that are capable of mimicking amino acids to design enzyme-like building blocks. Ultimately, these blocks may be arranged into new materials that can control electron flow on the nanometer scale.

Baer joined PNNL in 2011 as a Linus Pauling Fellow after obtaining a PhD in chemistry from the Ruhr-University in Bochum, Germany.

Nathan Tallent’s research aims to improve the flow of data between computers and scientific instruments. Currently, the distance, volume, and frequency of data can create traffic jams that inhibit important tasks. Tallent will develop the methods and analyses necessary for accelerating distributed data-intensive workflows that combine scientific modeling, data analytics, and machine learning. This project will develop techniques to orchestrate data and tasks within these workflows. The resulting tools will generate templates to execute specific workflows based on data analysis and models, coordinating tasks and data layouts to better use the fastest data resources.

Tallent joined PNNL in 2011 as a research scientist after obtaining a PhD in chemistry from Rice University.

Ben Loer will use his award to seek ways to reduce the impact of radiation on superconducting quantum device coherence. Loer was a researcher on a multidisciplinary research team that recently showed that radiation from natural sources in the environment can limit the performance of superconducting quantum bits, known as qubits. The discovery has implications for the construction and operation of quantum computers, an advanced form of computing. Loer’s research will hasten the arrival of full-scale quantum computing and help improve performance of future entangled quantum sensors.

Loer joined PNNL in 2016 after obtaining a PhD in physics from Princeton University.

The Early Career Research Program is managed by DOE's Office of Science and awards research grants to young scientists and engineers at U.S. universities and national laboratories. The grants are designed to support exceptional researchers during the crucial early years of their careers and help advance discovery in fundamental sciences.

“Maintaining our nation’s braintrust of world-class scientists and researchers is one of DOE’s top priorities—and that means we need to give them the resources they need to succeed early on in their careers,” said Secretary of Energy Jennifer M. Granholm. “These awardees show exceptional potential to help us tackle America’s toughest challenges and secure our economic competitiveness for decades to come.”

This year's selections support 83 scientists, receiving a total of $100 million. The awardees represent 11 DOE National Laboratories and 41 universities in 32 states.

To be eligible, a researcher must be a full-time employee at a DOE national laboratory or an untenured, tenure-track assistant or associate professor at a U.S. academic institution. The applicant must also have received a PhD within the past 10 years.

The selection of Baer, Loer, and Tallent brings the total number of PNNL early career recipients to 23 since the program's inception in 2010.