Scientists put the ​“solve” in ​“solvent” for lithium-sulfur battery challenge 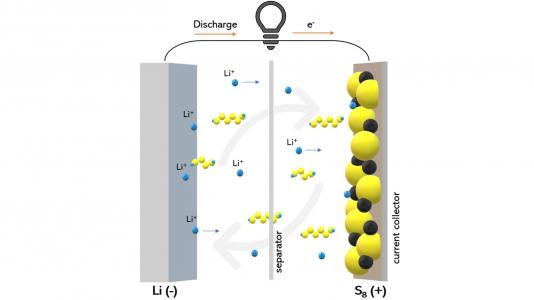 This diagram shows a lithium-sulfur battery during discharging. Scientists were able to observe how a certain type of electrolyte material can reduce the shuttling of polysulfide compounds (shown as yellow and blue chains) that impairs the battery’s performance.

One type of these batteries, called lithium-sulfur batteries, could offer more energy density and lower cost than the traditional graphite/metal oxide lithium-ion battery. However, its performance is frequently impaired by a parasitic reaction that happens inside the battery that prevents it from cycling as efficiently.

“It goes to show that there’s no magic bullet for lithium-sulfur batteries yet, and that we’ll still need to continue to find ways to improve the chemistries we have.” — Chi Cheung Su, Argonne chemist

Now, in a new study, scientists at the U.S. Department of Energy’s Argonne National Laboratory have discovered how a certain class of electrolyte material can reduce the frequency of this reaction, potentially paving the way for more effective lithium-sulfur batteries.

When a lithium-sulfur battery is charged, an unavoidable side reaction called lithium polysulfide shuttling frequently occurs. As the battery charges, lithium sulfide is converted to sulfur on the cathode, but some lithium-sulfur compounds that are incompletely oxidized can dissolve from the cathode into the electrolyte — the liquid region of the battery that separates the two electrodes.

At this point, the lithium-sulfur compounds can diffuse and become reduced on the anode and oxidize back on the cathode. This process can go over and over again in a way that wastes the battery’s charge without putting it to work.

“With the polysulfide shuttle, you’re getting nothing out of your battery except for heating it up,” said Argonne chemist Chi Cheung Su, an author of the study. “In electrochemical terms, it’s like trying to fly from New York to Los Angeles, but getting stuck traveling back and forth between Chicago and Denver.”

A large part of the reason for the initiation of the polysulfides shuttling happens because the polysulfides are able to dissolve readily in an electrolyte containing a solvent mixture of two compounds called dioxolane (DOL) and dimethoxyethane (DME). “There are two problems that we need to solve simultaneously — having low solubility and high conductivity,” Su said. “By achieving both, we can bring these batteries closer to reality.”

According to Su, the past five years or so have seen the development of a new type of electrolyte material that could address both of these issues. This material, called a hydrofluoroether, or HFE, has a much lower solvating ability while still maintaining generally good conductivity. “The first step for the lithium to get to the anode involves dissolving it in the electrolyte,” he said. “Like water is a really good solvent for table salt, DME is a very good solvent for lithium. But with HFEs it’s like trying to dissolve salt in gasoline.”

Although this general property of HFEs have been known for several years, Su and his colleagues have come up with a general way to predict the solvating behavior and conductivity of this class of molecules. First, they divided them up into three types depending on their chemical structures. In measuring how the electrolytes performed, the researchers noted an important trade-off: those chemistries that showed the lowest solvating behavior and the least amount of polysulfide shuttling also had lower conductivities.

“It goes to show that there’s no magic bullet for lithium-sulfur batteries yet, and that we’ll still need to continue to find ways to improve the chemistries we have,” Su said.

A paper based on the research, “A selection rule for hydrofluoroether electrolyte cosolvent: establishing a linear free‐energy relationship in lithium–sulfur batteries,” appeared in the May 13 issue of Angewandte Chemie.

The research was funded by DOE’s Vehicle Technologies Office. Other researchers on the study include Argonne’s Meinan He, Rachid Amine, and Khalil Amine.