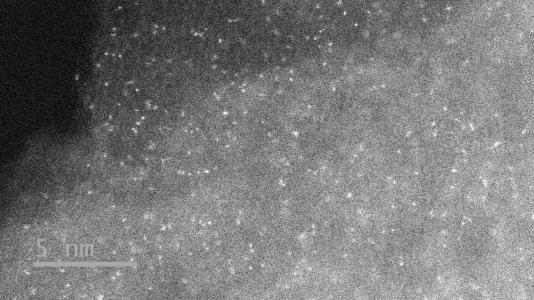 (Image by Zhennan Huang and Reza Shahbazian-Yassar, Department of Mechanical and Industrial Engineering, University of Illinois at Chicago.)

Single platinum atoms spread over a sea of carbon substrate.

Newswise — Single atoms work great as catalysts, but they usually don’t stay single for long. Argonne scientists are part of a team that uses high-temperature shock waves to keep them in their place.

Synthesizing stable single atom catalysts proves challenging because many of the most useful catalytic reactions, such as the conversion of methane, can only occur at high temperatures. To remain in a stable state, single atoms often cluster together when high temperatures introduce an increase in instability to the system, causing a decline in their catalytic performance.

“We don’t want to stop here. We want to study this novel method in common reactions and then generalize it to other materials." — Tianpin Wu, Argonne scientist

Scientists at the U.S. Department of Energy’s (DOE) Argonne National Laboratory, along with partners from multiple universities, have demonstrated that exposing a catalyst and substrate to repeated high‑temperature shock waves breaks the catalyst into single atoms and allows the system to remain stable for unprecedented periods of time.

In this pivotal discovery, the scientists used platinum for the catalyst and carbon for the substrate. Platinum serves as a catalyst for many important reactions, such as driving fuel cells and converting natural gas to more useful forms.

The study, which recently appeared in Nature Nanotechnology, took advantage of interdisciplinary collaboration between multiple national labs and universities. Computer models of the system during heat pulsing came from the University of Maryland. The predictions for how the system would behave closely matched the actual results obtained during reaction tests at Johns Hopkins University and X-ray absorption spectroscopy at Argonne’s Advanced Photon Source (APS), a DOE Office of Science User Facility. In situ stability testing using atomic resolution microscopy was performed at University of Illinois at Chicago and at the Environmental Molecular Sciences Laboratory, another DOE Office of Science User Facility at Pacific Northwest National Laboratory.

The APS beamline operated by the X-ray Science division Spectroscopy group specializes in X-ray absorption spectroscopy, and it hosts a wide variety of users from fields such as energy storage, catalysis and environmental science. The technique they employed for the system in this study is able to uniquely characterize single-atom catalysis. The scientists were able to show that after 10 shock waves, there were virtually no platinum-platinum bonds, and that the platinum was binding with the carbon substrate, which is important in explaining the boosted performance of the system.

These experiments were performed using shock waves at record-high temperatures of up to 2000 K, a temperature higher than even the hottest magma below Earth’s surface, establishing a stable catalytic environment ripe with potential for reaction. The system remained stable for more than 50 hours after synthesis.

The shock wave method bypasses the common problem of single atoms binding with themselves because when you heat atoms to high temperatures, the splash of energy causes them to move around and break their pre-existing bonds. This instability disrupts platinum-platinum bonds and makes the platinum spread out over the carbon, providing energy-stable opportunities for it to bind with the carbon molecules. With each additional shock wave, the platinum atoms spread out more and more.

“The bonds between platinum and carbon are strong, so if you separate the platinum from itself and it binds with carbon, it will stay there,” said Tianpin Wu of the Spectroscopy group, an Argonne scientist on the study. “The carbon is like soil and the platinum is like a flower with strong roots — the system is very stable.”

Using thermal shock waves as a method of synthesizing single-atom catalysts is a time-efficient and widely applicable way of achieving catalytic environments that are conventionally challenging. The team plans to use this method to synthesize other important catalysts such as ruthenium and cobalt with substrates of carbon nitride and titanium dioxide to gain a more general theory of how the method works.

“We don’t want to stop here,” said Wu. “We want to study this novel method in common reactions and then generalize it to other materials.”

“We compared the performance of our high-temperature single atom platinum catalyst with conventional platinum nanoparticles in methane conversion, and we saw a significant improvement in selectivity and thermal stability over long periods of time,” said Wu.

The team went further to test the thermal stability of the system by treating the single atoms with shock waves up to 3000 K. The result was still a sea of single atoms, allowing for maximized atom-use efficiency.

“This work was like a puzzle, and all of the collaborators’ contributions were necessary to get a detailed picture of the system,” said Wu. “Not any one of the techniques could have told the story alone, but together we showed that this method is as successful as it is.”