"Smart" paper produced at the University of Washington can conduct electricity and transmit information about its surrounding environment wirelessly to a receiver. The images in this collection show how the paper is made. 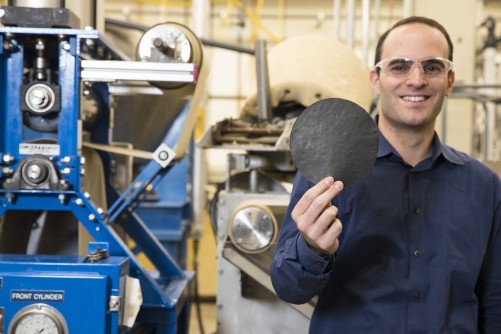 Anthony Dichiara, a University of Washington professor in the School of Environmental and Forest Sciences, holds a piece of “smart” paper created in his lab.

In cities and large-scale manufacturing plants, a water leak in a complicated network of pipes can take tremendous time and effort to detect, as technicians must disassemble many pieces to locate the problem. The American Water Works Association indicates that nearly a quarter-million water line breaks occur each year in the U.S., costing public water utilities about $2.8 billion annually.

A University of Washington team wants to simplify the process for discovering detrimental leaks by developing "smart" paper that can sense the presence of water. The paper, laced with conductive nanomaterials, can be employed as a switch, turning on or off an LED light or an alarm system indicating the absence or presence of water.

The researchers described their discovery in a paper appearing in the November issue of the Journal of Materials Chemistry A.

"Water sensing is very challenging to do due to the polar nature of water, and what is used now is very expensive and not practical to implement," said lead author Anthony Dichiara, a UW assistant professor of bioresource science and engineering in the School of Environment and Forest Sciences. "That led to the reason to pursue this work."

Along with Dichiara, a team of UW undergraduate students in the Bioresource Science and Engineering program successfully embedded nanomaterials in paper that can conduct electricity and sense the presence of water. Starting with pulp, they manipulated the wood fibers and carefully mixed in nanomaterials using a standard process for papermaking, but never before used to make sensing papers.

Discovering that the paper could detect the presence of water came by way of a fortuitous accident. Water droplets fell onto the conductive paper the team had created, causing the LED light indicating conductivity to turn off. Though at first they thought they had ruined the paper, the researchers realized they had instead created a paper that was sensitive to water.

When water hits the paper, its fibrous cells swell to up to three times their original size. That expansion displaces conductive nanomaterials inside the paper, which in turn disrupts the electrical connections and causes the LED indicator light to turn off.

This process is fully reversible, and as the paper dries, the conductive network re-forms so the paper can be used multiple times.

The researchers envision an application in which a sheet of conductive paper with a battery could be placed around a pipe or under a complex network of intersecting pipes in a manufacturing plant. If a pipe leaks, the paper would sense the presence of water, then send an electrical signal wirelessly to a central control center so a technician could quickly locate and repair the leak.

In addition, the paper is so sensitive that it can also detect trace amounts of water in mixtures of various liquids. This ability to distinguish water from other molecules is particularly valuable for the petroleum and biofuel industries, where water is regarded as an impurity.

"I believe that for large-scale applications, this is definitely doable," Dichiara said. "The price for nanomaterials is going to drop, and we're already using an established papermaking process. You just add what we developed in the right place and time in the process."

The nanomaterials added to the paper were engineered in such a way that they can be incorporated during conventional papermaking without having to modify the process. These materials are made of extremely conductive carbon. Because carbon is found in all living things, nearly any natural material can be burned to make charcoal, and then carbon atoms can be extracted to synthesize the materials. The team has experimented with making nanomaterials from banana peels, tree bark and even animal feces.

They also tried making nanomaterials from wood scraps to show that the entire papermaking process can be completed with cheap, natural materials.

"Now we have a sustainable process where everything is from pulp and paper, and we can make conductive materials from them," Dichiara said.

The paper, stiff and smooth in texture, is a rich black color because of the nanomaterials (carbon from charcoal). The 8-inch disks made in the lab are prototypes; the team hopes to test the process on an industrial-sized papermaking machine next, which will require more nanomaterials and paper pulp.

Funding for this research came from the U.S. Department of Agriculture's National Institute of Food and Agriculture, McIntire Stennis project, and from the UW School of Environmental and Forest Sciences.

Journal of Materials Chemistry A, Nov-2017