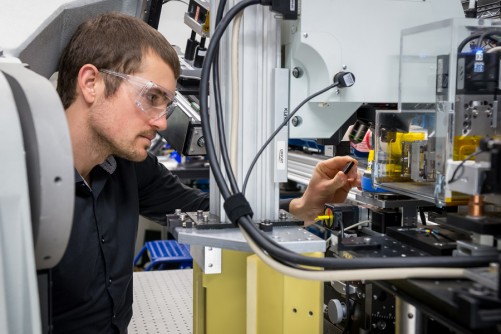 Newswise — While doctors use X-rays to see the broken bones inside our bodies, scientists have developed a new X-ray technique to see inside continuously packed nanoparticles, also known as grains, to examine deformations and dislocations that affect their properties.

In a new study published last Friday in Science, researchers at the U.S. Department of Energy’s (DOE) Argonne National Laboratory used an X-ray scattering technique called Bragg coherent diffraction imaging to reconstruct in 3-D the size and shape of grain defects. These defects create imperfections in the lattice of atoms inside a grain that can give rise to interesting material properties and effects.

“This technique provides very high sensitivity to atomic displacements, as well as the ability to study materials under a number of different realistic conditions, such as high temperatures,” said Argonne physicist Wonsuk Cha, an author of the paper.

“If you want to map the inside of the grain, to see the network of dislocations, this is an exciting technique,” added Argonne materials scientist Andrew Ulvestad, another author.

For the past ten years, scientists had looked at the defect structure of separated nanoparticles. But scientists didn’t have a way of looking at the distortions in the crystal lattice in grains that formed continuous films of material, like those found in some solar cells or certain catalytic materials.

In Bragg coherent diffraction imaging, scientists shine X-rays at a sample, which scatter off the atoms in the material’s structure. By observing the scattering patterns, scientists can reconstruct the material’s composition in 3-D.  With small isolated nanoparticles, this information is relatively easy to gather, but for thin films there are additional complications. “It’s like trying to figure out where Paul McCartney is in the iconic photo of Abbey Road versus trying to figure out where the sixth violinist in a large orchestra is,” Ulvestad said.

The research focused on a specific area between particles known as the “grain boundary,” a region that causes most of the interesting material phenomena. “The grain boundary can be thought of like a fault line in a tectonic plate,” Ulvestad said. “It governs a lot of underlying activity.”

Ulvestad specifically mentioned thin-film solar cells, a promising photovoltaic technology, as a notable example of a type of technologically exciting material that could benefit from the study. “These are usually pretty complicated materials whose behavior is largely determined by the atoms that are on the ‘front lines,’ near the grain boundaries,” he said.

The dislocations near grain boundaries are controlled by the defect structure in the material, and Ulvestad hopes that as scientists gain the ability to control the synthesis and positioning of defects, they will ultimately also be able to control the behavior of materials near the grain boundary.

By using the especially penetrative high-energy X-rays produced by Argonne’s Advanced Photon Source, the researchers were able to watch the deformation of the crystal lattice in real time.

An article based on the study, “Bragg coherent diffractive imaging of single-grain defect dynamics in polycrystalline films,” appeared online in Science on May 19. Other researchers on the study include Argonne materials scientist Brian Stephenson, Argonne physicist Wonsuk Cha, and two researchers from Stanford University.