The Clean Dozen: 12 Techs Near Commercial Use 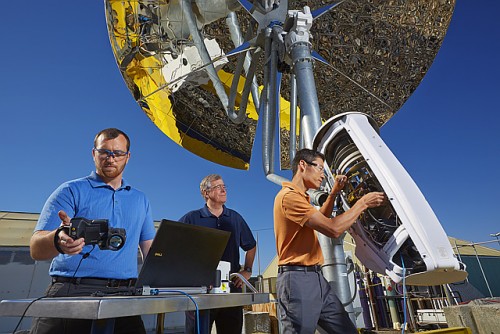 PNNL’s Solar Thermochemical Advanced Reactor System uses concentrated solar power to convert natural gas into more valuable fuels, including hydrogen for fuel cell cars. The system is among 12 PNNL-developed technologies that are receiving grants from DOE’s Technology Commercialization Fund to move them closer to commercial use.

Newswise — RICHLAND, Wash. -- A dozen clean energy technologies that enable everything from lightweight, fuel-sipping cars to the expansion of renewable energy and cleaner fossil fuel use are getting a boost at the Department of Energy’s Pacific Northwest National Laboratory.

DOE is awarding PNNL about $4.4 million to bring the 12 technologies closer to commercial use, according to an announcement from DOE’s Office of Technology Transitions about the first DOE-wide grants from its Technology Commercialization Fund. Companies partnering with PNNL to advance these technologies will also provide matching support, while PNNL will provide funding from its technology licensing income to support projects not involving industrial partners. PNNL is among 12 DOE national labs receiving a total of nearly $16 million to advance 54 different lab-developed technologies through today’s grant announcement.

“Deploying new clean energy technologies is an essential part of our nation’s effort to lead in the 21st century economy and in the fight against climate change,” said Lynn Orr, DOE’s undersecretary for science and energy. “The funds announced today will help to accelerate the commercialization of cutting-edge energy technologies developed in our national labs, making them more widely available to American consumers and businesses.”