The Fine-Tuning of Two-Dimensional Materials 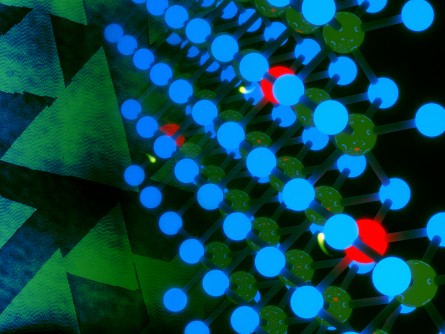 Newswise — In two recent publications, teams of researchers led by Penn State provide new understanding of why synthetic two-dimensional materials often perform orders of magnitude worse than predicted, and how to improve their performance in future electronics, photonics, and memory storage applications.

Two-dimensional materials are thin films only an atom or two thick. Researchers make 2D materials by the exfoliation method, which means peeling a slice of material off a larger bulk material, or by condensing a gas precursor onto a substrate. The former method provides a higher quality material, but is not useful for making devices. The second method is well established in industrial applications, but yields low performance 2D films.

In a paper published online in Scientific Reports, a Nature Group publication, researchers for the first time demonstrated why the quality of 2D materials grown by the chemical vapor deposition method have poor performance compared to their theoretical predictions.

“We grew molybdenum disulfide, a very promising 2D material, on a sapphire substrate,” said lead author Kehao Zhang, a Ph.D. candidate in the group of Joshua Robinson, associate professor of materials science and engineering, Penn State. “Sapphire itself is aluminum oxide. When the aluminum is the top layer of the substrate, it likes to give up its electrons to the film. This heavy negative doping (electrons have negative charge) limits both the intensity and carrier lifetime for photoluminescence, two important properties for all optoelectronic applications, such as photovoltaics and photosensors.”

Once they determined that the aluminum was giving up electrons to the film, they used a sapphire substrate that was cut in such a way as to expose the oxygen rather than the aluminum on the surface. This enhanced the photoluminescence intensity and the carrier lifetime by 100 times.

In a related paper, published online this week in Advanced Functional Materials, a second team of researchers led by the same Penn State group used doping engineering that substitutes foreign atoms into the crystal lattice of the film in order to change or improve the properties of the material.

“People have tried substitution doping before, but because the interaction of the sapphire substrate screened the effects of the doping, they couldn’t deconvolute the impact of the doping,” said Zhang, who was also the lead author on the second paper.

Using the oxygen-terminated substrate surface from the first paper, the team removed the screening effect from the substrate and doped the molybedenum disulfide 2D film with rhenium atoms.

“We deconvoluted the rhenium doping effects on the material,” said Zhang. “With this substrate we can go as high as 1 atomic percent, the highest doping concentration ever reported. An unexpected benefit is that doping the rhenium into the lattice passivates 25 percent of the sulfur vacancies, and sulfur vacancies are a long-standing problem with 2D materials.”

The doping solves two problems: It makes the material more conductive for applications like transistors and sensors, and at the same time improves the quality of the materials by passivating the defects called sulfur vacancies. The team predicts that higher rhenium doping could completely eliminate the effects of sulfur vacancies.

“The goal of my entire work is to push this material to technologically relevant levels, which means making it industrially applicable,” Zhang said.

Portions of this work were supported by the National Science Foundation, The Semiconductor Research Corporation, DARPA, the U.S. Department of Energy, the Nanoelectronics Research Initiative and NIST.