To curb maternal deaths in developing countries, researchers use X-rays to map a lifesaving drug in action

New research will help in the quest to design low-cost drugs that can tackle postpartum bleeding and other conditions without severe side effects. 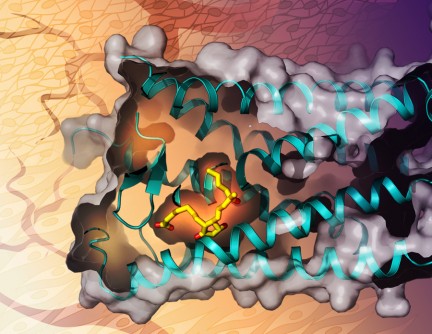 Using SLAC’s Linac Coherent Light Source, researchers mapped the shape of the EP3 receptor, one of the main triggers of labor in pregnant women. It’s shown here as tangles of teal coils; misoprostol, a drug known to stop postpartum bleeding in pregnant women, is shown as a yellow and red molecule that has bound into a pocket within the receptor.

Newswise — Every year, hundreds of thousands of women die during childbirth or due to pregnancy-related complications. Postpartum hemorrhaging, a condition in which the body bleeds excessively following the birth of a baby, is the leading cause of maternal mortality.

Misoprostol, a generic drug that induces labor and stops postpartum bleeding, has become a staple in developing countries – where 99 percent of these deaths occur – because it’s affordable and easy to store and administer. Due to its far-reaching applications in reproductive health, it’s listed as an essential medicine by the World Health Organization. But the drug also targets other tissues in the cardiovascular and central nervous systems and the gastrointestinal tract, bringing about serious side effects.

A team that includes researchers from the Bridge Institute at the University of Southern California (USC) and the Department of Energy’s SLAC National Accelerator Laboratory used X-rays to map the shape of a receptor in the body as it binds with misoprostol. This research, published in Nature Chemical Biology, could help in the quest to design low-cost drugs that can tackle postpartum bleeding without affecting other tissues.

“Misoprostol is a key drug for women’s health, especially in countries that lack access to medical resources and facilities, where it saves many mothers’ lives at childbirth,” says co-author Raymond Stevens, director of the Bridge Institute at the USC Michelson Center for Convergent Bioscience and a professor of chemistry and biological sciences at USC. “The development of newer therapeutics that are more selective with the tissues they target would be an impactful advancement in women’s health. This research improves our understanding of how the drug works and provides a starting point for new drug discoveries.”

Misoprostol is part of a class of drugs that bind to prostaglandin receptors, which produce a variety of physical effects in the body when activated. Because these drugs are so similar to the natural compounds in the body that bind to these receptors, they can control these effects, which include labor, inflammation, pain and fever.

“The human body is built of a few trillions of cells, and these cells have to talk to each other,” says co-author Alex Batyuk, a scientist at SLAC’s Linac Coherent Light Source (LCLS) X-ray laser. “The way they communicate is through these receptors, which sit in the cell membrane and transmit signals in and out of cells. About a third of the drugs on the market act on these kinds of receptors, mimicking the natural compounds that cells use to communicate with each other.”

Misoprostol works by targeting a prostaglandin receptor called EP3, one of the main triggers of labor in pregnant women. But because it can bind to a number of other receptors in a variety of tissues, the drug can produce side effects ranging from diarrhea to fetal heart abnormalities, fetal death and uterine rupture.

The researchers used LCLS to build a map of EP3 as it binds to misoprostol. They bound misoprostol to EP3, then crystallized the pair and zapped it with an X-ray laser beam, using the patterns formed when the X-rays scattered off the crystal to reconstruct the shape and structure of the receptor binding to the drug.

Until now, researchers were unable to determine the structure of EP3 and how drugs like misoprostol target and bind to it, a major roadblock in drug development. This research is the first to provide the 3D structure of a receptor in the prostaglandin family and might even extend beyond misoprostol into drugs used to treat other medical conditions controlled by prostaglandin receptors such as arteriosclerosis, the thickening and hardening of the artery walls.

“Trying to design new drugs without understanding the structure of the receptors they bind to is like trying to build a car from the ground up with no blueprint,” says Martin Audet, a biochemist at USC. “In this research, we produced a chemical map of this receptor to understand how it binds. This could enable us to get even more data about its molecular mechanics – how it moves and interacts with drug molecules – which will help us fine-tune other potential drug compounds and predict how they will impact the body. It provides a path forward to a new generation of drugs with fewer side effects.”

The research team also included scientists from Stanford University; Arizona State University; the GPCR Consortium in California; Domain Therapeutics in Canada; the iHuman Institute and the School of Life Science and Technology, both in China; and Moscow Institute of Physics and Technology in Russia.

Key components of this research were carried out at LCLS and at Argonne National Laboratory’s Advanced Photon Source, both DOE Office of Science user facilities. This work was supported by the National Institutes of Health; the Canadian Institute of Health and Research; the Science and Technology Centers Program of the National Science Foundation through BioXFEL; the GPCR Consortium; and the Russian Science Foundation.