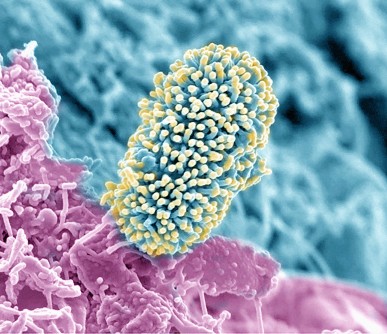 An intricately structured soil bacterium, less than a micron in size, makes its home on the root surface of an Arabidopsis plant. The image is from a related DOE project at the Environmental Molecular Sciences Laboratory, a DOE national scientific user facility located at Pacific Northwest National Laboratory, to understand how carbon within the root zone impacts the diversity and function of the rhizosphere microbial community.

Newswise — Like the tip of an iceberg, a plant sprouting from the soil barely hints at what lies beneath. At the nexus where roots and soil intersect are thriving microbial communities that play important roles in plant health and growth. Understanding how plant yields can be optimized, in part by optimizing their microbial partners, is of fundamental interest to farmers and crop breeders working on developing sustainable crops for the production of food and advanced fuels from plant biomass amidst the pressure exerted by an ever-increasing global population.

“Plants grow in soil and soil is full of microbes. Many trade nutrients with the plant,” said Jeff Dangl, a National Academy of Sciences member, Howard Hughes Medical Institute Investigator, and the John Couch Distinguished Professor of Biology at University of North Carolina. “The microbes get sugar that plants exude from their roots. Plants could select from among the complex community for strains that help them. But it is a crowded and complex ecosystem. And there are microbes that take plant nutrients and damage the plants. They are pathogens.”

The plant’s immune system can distinguish between friends and foes among these microbes, and upon detecting pathogens, can produce regulatory chemicals called phytohormones to activate a defensive response. In a study published online July 16, 2015 in Science Express, a team led by Dangl and colleagues, including scientists from the U.S. Department of Energy Joint Genome Institute (DOE JGI), a DOE Office of Science User Facility, looked at roles of three phytohormones in controlling the composition of the root microbiome in the model plant Arabidopsis thaliana.

The work was initiated as part of a DOE JGI Grand Challenge project studying the root-associated microbiomes of Arabidopsis, then grew into both a Community Science Program project and an NSF-funded Microbial Systems Biology grant investigating multiple plant species in the greenhouse and the field. “This is a key focus area for the DOE JGI, as we believe cultivation of beneficial microbiomes will be critical to sustainable bioenergy crop production in the future,” said DOE JGI Metagenome Program Lead Susannah Tringe.

To better understand the impact of phytohormones on root microbiomes, the team compared wild type root microbiomes with those of mutants lacking at least one of the following phytohormones: salicylic acid (SA), jasmonic acid or ethylene. Previous studies had shown that the compositions of root microbiomes can vary after infection, even if there were similar starting microbial communities. In an early presentation on this project, study co-first author Sarah Lebeis, a former postdoctoral fellow in the Dangl Lab and now an Assistant Professor at the University of Tennessee-Knoxville, showed how the relative abundances of Firmicutes, Proteobacteria and Actinobacteria varied in response to the presence or absence of these phytohormones. For example, in plants that made either too much (hyperimmune) or too little (hypoimmune) salicylic acid, the relative abundance of families within the phylum Actinobacteria was lower compared to the wild type microbiome.

Building off these findings, Lebeis and her colleagues examined root microbiomes using bacterial isolates cultured from plants grown in the wild soils to colonize sterile roots in a sterile soil-like substrate. These synthetic bacterial communities in the soil-like substrate and within the plant roots were tracked for eight weeks following inoculation. Among the bacteria used for these communities were nearly 40 bacterial isolates whose genomes had been sequenced at the DOE JGI.

“Deployment of these genomes in fully controlled reconstruction experiments allowed us to go beyond a description of the microbes present on the root in wild soil, toward systems to define the mechanisms that control microbe abundance. This also demonstrates the power of obtaining the genomes of environmental isolates,” said Lebeis, who added that the work confirmed their hypothesis that salicylic acid influences root microbiome composition. Even in this controlled setting, and importantly in the absence of pathogens, they were able to show the plant immune system has major effects on colonization by root-associated bacteria.

Knowing the roles of salicylic acid and other plant hormones in regulating the root microbiome composition could lead to an agricultural approach in which plants are regularly treated with the equivalent of an adult multivitamin, but how to improve pathogen defense without affecting growth remains to be determined.

“The immune system function for SA is defined largely in leaves, and yes, if you spray SA or chemical analogue of SA, one can make plants more resistant to a certain sort of pathogen,” Dangl speculated. “But one does not want to induce the plant immune system all the time, in much the same way you don't want to always have a fever. We need to figure out how SA helps to determine the balance of bacterial families that accumulate on and inside a healthy root, and how that results in benefits to the plant.”