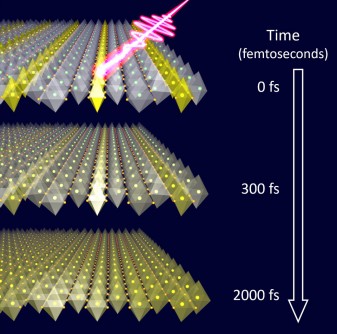 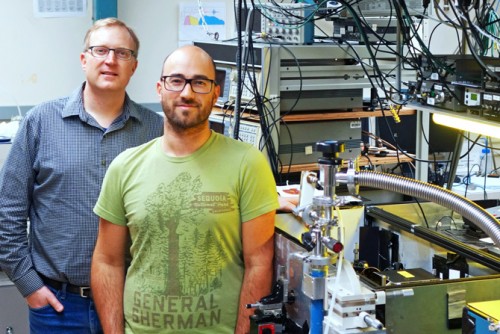 Robert Kaindl (left) and Giacomo Coslovich next to the experimental setup that generates ultrashort light pulses in the near-infrared and terahertz spectral range.

Newswise — Stripes can be found everywhere, from zebras roaming in the wild to the latest fashion statement. In the world of microscopic physics, periodic stripe patterns can be formed by electrons within so-called quantum materials.

Scientists at the Department of Energy’s Lawrence Berkeley National Laboratory (Berkeley Lab) have now disentangled the intriguing dynamics of how such atomic-scale stripes melt and form, providing fundamental insights that could be useful in the development of novel energy materials.

In strongly correlated quantum materials, interactions between the electrons reign supreme. The complex coupling of these electrons with each other – and with electron spins and crystal vibrations – results in exotic phases such as charge ordering or high-temperature superconductivity.

“A key goal of condensed matter physics is to understand the forces responsible for complex phases and the transitions between them,” said Robert Kaindl, a principal investigator and staff scientist at Berkeley Lab’s Materials Sciences Division. “But in the microscopic world, interactions are often extremely fast. If we just slowly heat or cool a material to change its phase, we can miss out on the underlying action.”

Kaindl and his colleagues have been using ultrafast laser pulses to tease apart the microscopic dynamics of correlated quantum materials to access the interactions among the electrons and with the crystal’s atomic lattice in the time domain.

For this study, the researchers worked with lanthanum nickelate, a quantum material and model stripe compound. In particular, the researchers investigated the electronic charges that form the stripe pattern and how they couple to the crystal lattice.

How charges interact with the crystal is a key ingredient to stripe physics, the researchers said.

“The crystal lattice strongly distorts around the charge stripes,” said Giacomo Coslovich, who did the work while he was a postdoctoral researcher at Berkeley Lab. “This change of the crystal symmetry results in new lattice vibrations, which we can in turn detect with light at terahertz frequencies.”

Kaindl and Coslovich are corresponding authors of a paper reporting these results in Science Advances.

In their experiments, the material is optically excited by a near-infrared laser pulse with a duration of 50 femtoseconds, and probed with a terahertz pulse with variable time delay. A femtosecond is one millionth of one billionth of a second.

The researchers found unexpected dynamics when using the laser to disrupt the microscopic order.

“The interesting thing is that while the laser immediately excited the electrons, the vibrational distortions in the crystal initially remained frozen,” said Coslovich, who is now associate staff scientist at SLAC National Accelerator Laboratory. “The stripe-phase vibrations disappeared only after several hundred to a few thousand femtoseconds. We also concluded that the speed depends on the direction of the interactions.”

The interpretation of the experiments was supported by simulations of the phonon dispersion by Alexander Kemper of North Carolina State University.

The results provide important insight into the interactions, or “glue,” that couple electrons to lattice vibrations in the lanthanum nickelate. However, their broader relevance stems from recent observations of charge order in high-temperature superconductors – materials where electrical currents can flow without resistance at temperatures above the boiling point of liquid nitrogen. While the mechanism remains puzzling, recent studies demonstrated the ability to induce superconductivity by suppressing stripes with short light pulses.

“Fluctuating stripes are thought to occur in unconventional superconductors. Our study puts a speed limit on how fast such patterns can change,” said Kaindl. “It highlights the importance of considering both the spatial and temporal structure of the glue.” 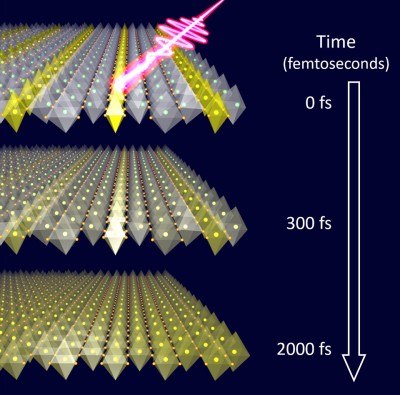 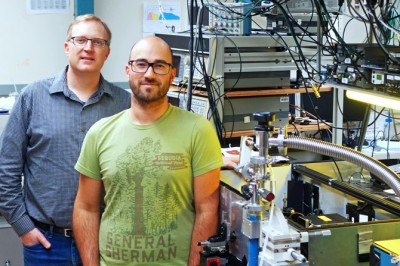 Caption: Robert Kaindl (left) and Giacomo Coslovich next to the experimental setup that generates ultrashort light pulses in the near-infrared and terahertz spectral range.