What if We Could Give Viruses a One-Two Punch? 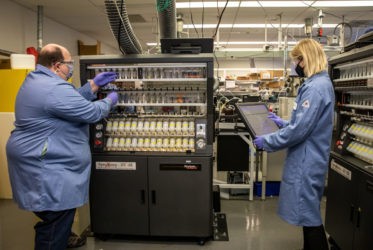 Adapted from a Stanford Engineering news release by Andrew Myers.

Newswise — Our bodies' very own virus-fighting machines are powered by antimicrobial peptides, which are among the most powerful biochemicals of the human immune system.

For decades, researchers have wanted to leverage these peptides’ natural virus-combat skills into new drug therapies. But peptides are vulnerable to enzymes that rapidly break them down in a way that robs them of their therapeutic properties.

“Because of their vulnerability to enzymatic breakdown, peptides are not ideal drugs. They’re expensive to produce, and yet they must be given in large doses because they disintegrate so quickly in the body,” said Annelise Barron, an associate professor of bioengineering at Stanford School of Engineering.

But now, Barron and a team of scientists, including researchers at Berkeley Lab’s Molecular Foundry, have created peptide-like molecules called “peptoids” that can inactivate viruses. The researchers believe that the technology could make possible an emerging category of antiviral drugs that could treat everything from herpes and COVID-19 to the common cold. Although years of development and testing remain before these peptoid-based antiviral drugs can be commercialized, the researchers say that their results, which they recently published in the journal Pharmaceuticals, are extremely encouraging.

Peptoids are among a class of biochemicals known as “biomimetics,” or molecules that mimic the behavior of biological molecules. They were invented at the East Bay biotech company Chiron more than 30 years ago by a team of scientists, which included Berkeley Lab’s Ron Zuckermann.

“Peptoids were originally developed as a drug-discovery engine to help small pharmaceutical startups,” said Michael Connolly, a principal scientific engineering associate in the Molecular Foundry’s Biological Nanostructures facility and a leading expert in peptoid science. Connolly led the team of scientists working to synthesize peptoids for Barron’s study at the Molecular Foundry.

The Molecular Foundry’s user program grants researchers like Barron free access to its world-class facilities, including the automated peptoid synthesis and characterization facilities managed by Connolly, and an opportunity to collaborate with top scientists across a wide range of scientific disciplines, including computer modeling and electron microscopy.

Unlike natural peptides, which are easily dissolved in the body by enzymes called proteases, peptoids are engineered for durability. For the current study, Barron and her team focused on the herpes virus, which is most notable for causing cold sores around the mouth, sexually transmitted infections, and even certain forms of blindness. If contracted later in life, herpes can be particularly devastating to its host. Herpes virus brain infections also are associated with Alzheimer’s disease, an active area of research.

The team designed and synthesized a small library of 120 peptoids. Based on preliminary experiments, they narrowed these to 10 promising candidates, which Natalia Molchanova, a scientific engineering associate in the Molecular Foundry’s Biological Nanostructures facility, synthesized just before Berkeley Lab shut down last March, at the onset of the COVID-19 pandemic.

Molchanova estimates that she produced hundreds of milligrams of the antiviral peptoids for Barron’s study. “We were among the few scientists at Berkeley Lab who were still on-site during the early days of the pandemic. It was really helpful from a mental health perspective to do something important,” she said. Before joining Berkeley Lab full time in May 2020, Molchanova had worked with Barron as a postdoctoral researcher at the Molecular Foundry.

Barron’s current study is the latest in a body of work that began in the late 1990s, when she became a Stanford professor and an academic user at the Molecular Foundry.

“In our work, we’re using advanced materials that not only mimic elements of the human innate immune system but are also safe in the body,” Barron said. “We couldn’t have done this work during the pandemic without the resources available at the Molecular Foundry.”

Once Molchanova had completed a batch of peptoids, Barron shipped them to collaborators, including Gill Diamond at the University of Louisville. There, Diamond and Barron tested peptoids not just for their effectiveness against the herpes virus, but also for their effect on healthy human epithelial cells from the exterior surface of the mouth.

They found that two types of peptoids can neutralize the herpes virus without harming epithelial cells. In fact, one of the peptoid candidates showed complete effectiveness against the virus. The finding, the researchers believe, suggests that peptoids have great potential for treating herpes and other membrane-bound viruses.

The peptoids work by disrupting the virus’s encapsulating outer membrane. This protective bubble is key to any virus’s ability to insinuate itself into healthy tissues and distribute its harmful DNA into human cells, leading to infection.

“Peptoids destroy the membranes, not just of herpes but of other viruses as well. This should give them wide applicability, perhaps even against certain deadly viral infections that currently have no cure,” Barron said.

Barron has since sent samples of the peptoids made by Molchanova to infectious disease labs around the world, asking them to test these new antivirals against a host of virulent strains, most notably the SARS-CoV-2 virus that causes COVID-19, but also influenza viruses and rhinovirus, which causes the common cold.

“This might not be the last pandemic, so having a broad-spectrum antiviral drug would be a good thing to have in your toolkit,” said Connolly.

“The early reports from my collaborators are very encouraging,” Barron said. “Because our peptoids mimic a very specific human broad-spectrum antiviral peptide – the cathelicidin LL-37 – we weren’t surprised that they work, but are still absolutely delighted to see these results coming in from all around the world.”

She added, “But what I also found exciting is how the Foundry scientists and I really came together like a family for this paper. We all worked together as a team in really challenging times.”

The Molecular Foundry is a DOE Office of Science nanoscience user facility at Berkeley Lab.

This study was supported by Maxwell Biosciences, U.S. Public Health Services, and the National Institute on Aging.

Operation of the Molecular Foundry to conduct this research was supported in part by the U.S. Department of Energy’s National Virtual Biotechnology Laboratory, a consortium of DOE national laboratories with core capabilities relevant to the threats posed by COVID-19, and funded under the Coronavirus Aid, Relief, and Economic Security (CARES) Act.