An analysis of 19,200 private companies, research organizations, public entities and higher education institutions involved in Horizon 2020 projects shows a loss of efficiency in some sectors if U.K. organizations are removed. 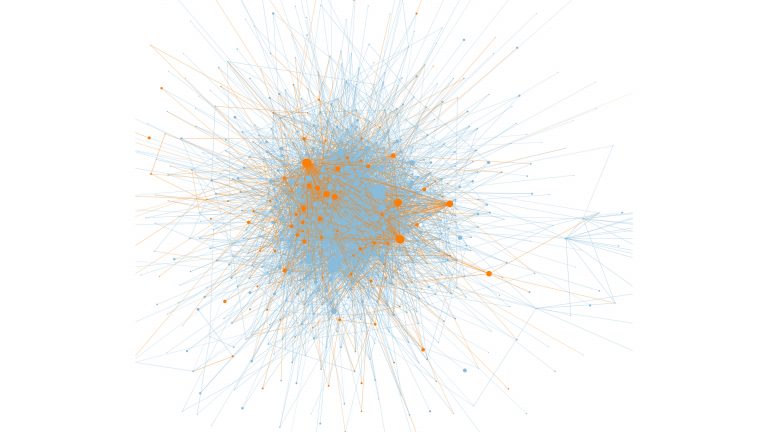 Image courtesy of the authors and Kampal Data Solutions

The collaboration network of European projects belonging to the Horizon 2020 Excellent Science program, showing only the top 1,000 organizations involved. U.K. institutions are shown in orange, European institutions are in blue.

Newswise — WASHINGTON, June 23, 2020 -- The United Kingdom’s withdrawal from the European Union, a move known as Brexit, took effect Jan. 31, 2020. The results of this change affected trade and security, but scientists wanted to know how it might affect the EU Framework Programmes for Research, known as Horizon 2020.

“Brexit is an unprecedented perturbation of a research and development collaboration network,” author Jesús Gómez-Gardeñes said. “The departure of a large number of institutions from a single country that is one of the research and innovation leaders cannot be compared to any other situation in the modern history of research.”

To examine risks, they looked at percolation theory, the idea that complex networks are more sensitive to random deletion of nodes than to attacks on the system that target specific, tightly related organizations. In a network of interconnected nodes, Brexit is viewed as targeted attack compared to random removal of organizations from the research network.

Networks were examined in terms of global efficiency (the ability to facilitate connections between organizations), local efficiency (how well local neighbors in the network maintain the ability to collaborate and share information) and mesoscopic-scale effects.

“When large-scale networks are examined in detail, it is common to find modular organization, the grouping of institutions into modules or communities, and make a mesoscopic analysis,” Gómez-Gardeñes said. “The European network seems very robust in its mesoscale organization, with the exception of the Excellent Science program, for which the leave of U.K. institutions yields a reorganization of the largest collaboration clusters.”

The analysis used centrality measures, such as an organization’s position in the path between other pairs of organizations, its distance from local neighbors in the network and its importance relative to its neighbors, to characterize the connectedness of organizations in the research network and their role in collaborations and formations of new projects.

The study showed a greater reduction in global efficiency when U.K. organizations are removed, with a larger negative impact for the Excellent Science program due to high measures of centrality of U.K. institutions in this collaboration network. However, the impact of Brexit in local efficiency is weaker, pinpointing that local collaboration clusters will retain their structure after Brexit.