Research on the benefits of pumped underground storage hydro (PUSH) took place at one Michigan mine but is applicable to post-mining communities around the world, including the Upper Peninsula, where researchers Roman Sidortsov and Timothy Scarlett, from left, are shown discussing the possibilities in the snowy spring of 2022. 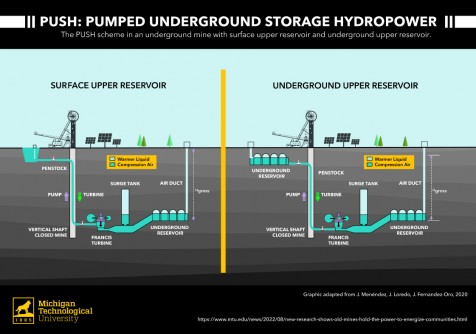 Energy security to wastewater treatment, researchers answer your questions about pumped underground storage hydropower and how it can revitalize post-mining communities economically and culturally.

The two researchers in Michigan Tech’s Keweenaw Energy Transition Lab recently published their initial study on pumped underground storage hydro, or PUSH, a closed-loop hydroelectric system where energy can be stored in old mines and then pumped to the surface as the community needs it. Conducted at Mather B. Mine in Negaunee, Michigan, the study found that the site had the capacity to provide 30,000 people with continuous power for 3.5 months — at a profit. The study also identified roughly 1,000 suitable sites for grid-scale PUSH facilities in the U.S.

Sidortsov, an associate professor of energy policy in Michigan Tech’s Department of Social Sciences and senior fellow for energy justice and transitions at the University of Sussex, is principal investigator on the project. He says the potential dovetails with the nation’s increased focus on infrastructure and the world’s urgent quest for reliable and affordable energy. The Russian invasion of Ukraine launched in early 2022 brings the energy picture into even sharper focus, says Sidortsov. “Moving away from the fossil fuel-powered world where the most questionable political regimes play a central role and toward a more distributed, clean and mostly electricity-powered future is one of the main lessons of this senseless and bloody war," he says.

Timothy Scarlett, an associate professor at Michigan Tech with expertise in industrial heritage and archaeology, has been researching post-mining communities and learning from residents for decades. Scarlett says PUSH is an opportunity for communities to take both their heritage and their future into their own hands. "These places matter to people," says Scarlett. "They are not wastelands. They matter, and I hope we can start thinking about abandoned mines ecologically, really embracing circular design and shifting mining away as far as possible from naked extraction— instead making it a part of developing sustainable and fair energy systems for resilient communities."

We've put together an extensive Q&A with Sidortsov and Scarlett, along with a series of videos and infographics that explain the technology. Watch the videos, read the Q&A and see examples of PUSH systems on Michigan Tech News. Caption: Research on the benefits of pumped underground storage hydro (PUSH) took place at one Michigan mine but is applicable to post-mining communities around the world, including the Upper Peninsula, where researchers Roman Sidortsov and Timothy Scarlett, from left, are shown discussing the possibilities in the snowy spring of 2022. 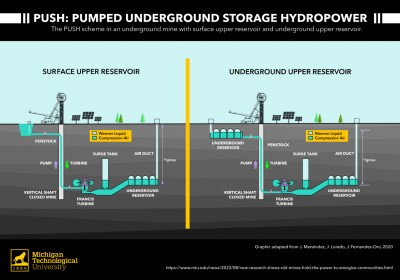